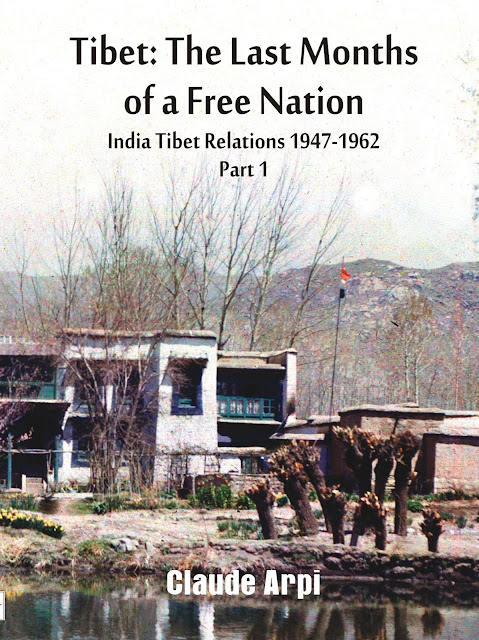 The book brings to fore how Jawaharlal Nehru deliberately kept Sardar Vallabhbhai Patel out of the discussions on Tibet.

Claude Arpi's latest book, Tibet: The Last Months of a Free Nation, is an original, one-of-its-kind account of how India lost the "Roof of the World" not because of the long-held notion of the great Chinese betrayal, but because of the monumental failure of former prime minister Jawaharlal Nehru and his ideological allies to see the writing on the wall for more than a decade. It's original because it, unlike other more celebrated books, refuses to look at the events through solely the Western lens. Rather, the author took the pain of going through desi papers to create a narrative that challenges the long-held notions of the event.

The book not just brings out the differences of opinion between Nehru and his deputy PM Sardar Vallabhbhai Patel, who was also the home minister, on how to deal with looming communist shadow over Lhasa. In the last weeks of Patel's life, who passed away on December 15, 1950, Nehru kept him out of the Tibetan issue, citing his deteriorating health.

Nehru's differences with Patel might be a known fact, but the high point of the book is when the author exposes how several senior bureaucrats were not happy with the prime minister's handling of the Tibetan affairs, which led India to lose a peaceful northern border.

Sardar Patel had written a letter to Nehru on November 7, 1950, detailing the implications of Tibet's invasion for India. The author tells us that Patel's "prophetic" letter was actually a draft sent by Sir Girija Shankar Bajpai, eminent civil servant and diplomat. A month after the entry of the Chinese forces in Tibet, Patel sent Bajpai's note under his own signature to Nehru, who chose to ignore it.

Arpi also brings out the frustration of seasoned diplomats such as Bajpai, who had to face the slight of his junior, KM Panikkar, the then Indian ambassador to China. Panikkar ceaselessly defended the Chinese interests to the extent of being detrimental to India's, and being ideologically closer to Nehru he would on several occasions bypass his immediate bosses in the department, including Bajpai. The ambassador not just failed to confirm several intelligence reports suggesting initial Chinese military aggressive moves, but also defended them by writing: "In view of frustration in regard to Formosa, Tibetan move was not unlikely."

No wonder, when things were moving at a rapid pace in communist China, the country was in a denial mode. Nehru, blinded by his ideological obsession and wrong associates like Panikkar and defence minister VK Krishna Menon, even went to the extent of questioning the efficacy of a strong army. This mindset alone explains why, at the time of the Chinese aggression, India's gun factories were believed to be producing coffee.

The book, at another level, is also a reminder of what's wrong with our academia. When Arpi writes, "with this compilation, one can read for the first time, Tibet's tragedy from the Indian viewpoint", it makes one wonder: Why did it take Indian scholars so long to look at such easily available documents in the Nehru Memorial Museum Library and National Archives of India? It definitely wasn't an accidental failure.

Tibet: The Last Months of a Free Nation is a book that should be read by everyone who cares to know where we went wrong in our ties with China and Tibet. But given the stunning silence in the academic circles, it hardly seems to be the case. Maybe it's because we are living in the era of manufactured bestsellers. Manufactured because the bestseller list can now be rigged. One just needs to know the procedure. Remember Lani Sarem, a one-time actress, who hired a company to ensure her 2017 book, Handbook for Mortals, found a place on the New York Times bestseller list? She managed to get one, albeit for a short time. And back home, it's now an old joke in the publishing circle about a noted novelist "managing" a bestseller slot for his first book by buying thousands of its copies.

Arpi's book is definitely not worth a "bestseller" slot, but it rightly deserves an intellectual buzz. Sadly, it's not the case in the country right now.
Posted by Claude Arpi at 8:45 PM