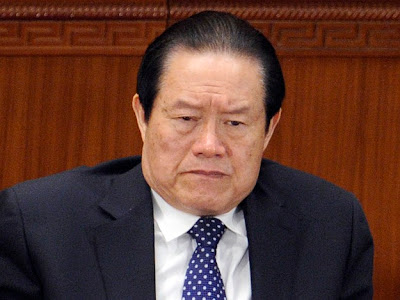 This posting on a Foreign Policy's blog gives an idea of the atmosphere in China today.
These wild founded or unfounded rumors are the logical consequence of an extremely opaque system.
How long will it last?
The regime in Beijing wants to control everything and does not control anything.
The government publication, Huanqiu recently published an article complaining about  rumors spreading in the Middle Kingdom; however, it did not analyze the root of the problem which is opacity.
The article entitled "Hold the Line of Defense and Resist Rumors" says:


Recently, certain rumors have been spreading on and off of the Internet, with high visibility. Some of them even involve Changan Street (the location of the Chinese State Council) and Zhongnanhai (the headquarters of the Communist Party). These rumors are very bizarre and ridiculous, thus interfering with public opinion. Chinese society should be on the alert about this and should not let the rumor mill run without restrictions.” The commentary alleged that the rumors are quietly eroding society. “[To legitimize rumors] is in fact to build a publicly-accepted world outside of the current political framework and to constantly erode the authority of the current system. Once rumors are legitimized, they will become a cheap tool to disintegrate the country ideologically and politically.

If the Communist Party is interested to stop the ideological and political disintegration of the country, the only solution is to open itself (something Deng Xiaoping did in 1978 for the economy).
Is the Party able to do so?
The Burmese regime is the example of a most opaque system opening itself to the world in a peaceful and dignified manner.
Unless, this is done, rumors will continue and the Party will keep loosing whatever is left of its legitimacy in the eyes of the masses.

The Great Rumor Mill of China
Foreign Policy
ISAAC STONE FISH
MARCH 22, 2012
Something strange is going on in Beijing. Here are the five most virulent conspiracy theories making the rounds -- and a stab at the likelihood of them panning out.
The public hasn't seen or heard from high-ranking Communist Party leader Bo Xilai since he was sacked last week in Beijing, and the Chinese Internet has been awash with debate over what's actually going on behind palace walls. "People are nervous, there's not much information available," Bo Zhiyue, an expert on Chinese elite politics at the National University of Singapore, told AFP. "They are hungry for new information, and if there's nothing new, they will make up new information."
Speculation is rife that a coup might have happened, with the only general consensus being that something big is going on in Beijing. What follows is a curated guide to the "information" -- read: wild rumors and speculation -- floating around online in Chinese about Bo Xilai's surprising fall from grace and what his sacking means for the future of the Chinese Communist Party.

1. Bo Xilai was sacrificed in the name of party unity.
The rumor: Although Bo had widespread support in the high leadership, current President Hu Jintao and former President Jiang Zemin (who's not dead, though this was rumored, too) agreed to kick him out to facilitate a smooth power transition for Xi Jinping this fall. The 85-year old Jiang, an ally of Bo's now deceased father, turned on Bo Xilai for the good of the Communist Party.
Really?: For a party bent on showing a united front to outsiders, Bo Xilai, with his loud populism and his overt (at least for China) thirst for power, apparently proved too dangerous. Analysts sometime classify Hu Jintao as belonging to a different faction of the party than Jiang Zemin, but the two leaders have worked together to houseclean in the past; apparently cutting a deal to depose a powerful Shanghai party chief in 2006.
The source: Various Taiwanese and Hong Kong media websites that tend to mix assertion with fact when reporting on elite Chinese politics.
Likelihood: Possible but unprovable at the moment, at least until someone releases better sourcing or better documentation.

2. Mao Zedong's grandson will come to power.
The rumor: General Mao Xinyu will be promoted to Bo's position, or another high ranking post, to fight corruption in the name of his glorious grandfather and make the country strong once more.
Really?: General Mao, possibly the world's most obese major general, is a tragicomic figure in Chinese politics. Imagine if Jimmy Carter's embarrassing brother mixed with a slovenly version of Kato Kaelin were the venerated grandson of your nation's founder. Because of his illustrious lineage, though, he still appears at major meetings to present information, with the added benefit of entertaining reporters.
Jamil Anderlini, who interviewed him last year for the Financial Times, writes:
Unlike other "princelings," as the children of revolutionary heroes are known, General Mao has never been accused of using his pedigree to advance his business interests. On the contrary, he is considered incapable of doing much of anything besides memorizing a few tracts of his grandfather's famous quotes, something that every Chinese child in the 1960s and 1970s could do.
General Mao's penmanship is so childish it has even spun a parody account on Weibo, "Mao Xinyu the Calligrapher."
Source: Scattered comments on Chinese microblogs.
Likelihood: Slightly better than the Mayan Apocalypse.

3. Another high-ranking leader has been purged.
The rumor: Zhou Yongkang, ostensibly a Bo Xilai supporter, has been detained by order of President Hu Jintao in the biggest leadership shake-up, and possibly the most destabilizing, since the Mao's death in 1976.
Really?: Nine men currently sit on the Politburo Standing Committee, the top decision making body in China. Zhou, officially ranked last, oversees state security and the police, but some analysts see him as one of the Standing Committee's most powerful men. A former oilman who grimaces even when he smiles, imagine Zhou as a Dick Cheney with a slightly lower rank. Xinhua has reported that the Political and Legislative Affairs Committee, which Zhou chairs, will host a training of more than 3,300 provincial, city, and county-level officials in April, but it's unclear what this says about Zhou's grip on power.
The source: A Chinese edition of the Epoch Times (the paper affiliated with the banned-in-China Falun Gong sect) compares Zhou's detention -- which no one else can corroborate -- to the arrests of the Gang of Four in 1976. The paper, however, sources this to "indications." The English edition is a bit more circumspect; in an article entitled "China's Security Chief Zhou Yongkang Pulled from Power?" they qualify their statement with the helpful phrase: "News of Zhou's arrest remains unconfirmed."
Likelihood: Not outside the realm of possibility, but the chance of this happening appears minuscule. It's more likely wishful thinking. The Epoch Times has written good stories and broken news, but on trustworthiness appears to fall somewhere between the Washington Times and Scientologynews.org. The Epoch Times also has an axe to grind here: given Zhou's role in the Falun Gong crackdown, it's a safe bet that many in that newspaper, and its shadowy backers, would be happy to see him go.

4. The son of Bo Xilai was killed in a Ferrari crash.
The rumor: Bo's son Guagua was driving the Ferrari that crashed on Sunday night in Beijing, killing him and injuring his two unnamed female companions.
Really? Bo Guagua, Bo's dapper, Oxford-educated son, has long been a favorite target of the Internet set. Bo is currently a student at Harvard's Kennedy School, and the snarkier corners of the Chinese web treat him like the worthy subject of Gawker-like attention.
Source: Comments in articles about the mysterious and censored Ferrari crash.
Likelihood: Almost impossible. The Wall Street Journal reported that Bo the younger drove a Ferrari to the U.S. Embassy in Beijing for a dinner last year, but that -- and his father's troubles -- appear to be the only thing linking him to the accident. The Weibo account assumed to belong to Bo has been active since, and, at the risk of stating the obvious, just because he hasn't been seen since his father's sacking doesn't mean he died in a Ferrari crash.

5. Armed chaos in Beijing.
Rumor: Yesterday saw gun-battles in Beijing, the airport has been sealed, and martial law had been imposed on the Avenue of Eternal Peace (the street perpendicular to Tiananmen Square and that runs alongside many important government buildings).
Really? There appears to be something strange afoot in Beijing, but fears of a return to June 4, 1989 -- when tanks rolled into Tiananmen Square and the capital fell under martial law, a response both to a student protest movement and disagreements among members of the Politburo Standing Committee -- seem outlandish.
Source: Chinese articles published on overseas websites, trying to explain and debunk the current rumors floating around the Internet. Mostly they're just adding to them. As Foreign Policy's Christina Larson pointed out, this is when a Chinese Peter Jennings would be useful.
Likelihood: It's possible there was sporadic gunfire in Beijing -- though it's a city where guns are heavily restricted. But sealing the world's second-busiest airport and imposing martial law on a major thoroughfare in a city filled with millions of bloggers, hundreds of foreign journalists, and thousands of international observers without any credible source reporting this seems, well, impossible.

So what are we to make of all this? For the time being, it's too early to say. Silence from official channels, and lack of information, has fueled a lot of speculation. Yesterday, in the state-run Global Times, an unsigned essay -- perhaps the longest and most direct mention of what is happening in China in mainstream media -- didn't even mention Bo Xilai by name, instead referring to "The Chongqing Incident." Unsurprisingly, it urged people to place their trust in the highest levels of the Communist Party.
"Because we now have become more diversified, we have other choices, we have realized that trusting in the Party Central Committee, implementing the path of the Party, is more dependable than any methods other people teach us," it reads. It's an odd time to talk about other paths, other teachers. The essay, which has been widely re-posted online, appears to have been taken down from the Global Times website, which could mean that someone chose to comment on a subject before the Communist Party decided the party line.
And when the party line doesn't even know what it wants to communicate, it's fuel to the flames of conspiracy.
Posted by Claude Arpi at 3:36 PM