The Nine Haves and the Six Ones 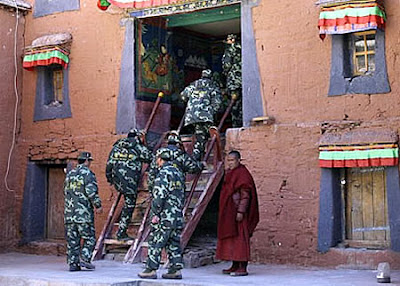 On the side of the National People's Congress (NPC) presently held in Beijing, Padma Choling, the Chairman of the Tibet Autonomous Region spoke about the recent spate of self-immolations in Tibet. He affirmed: "I feel very distressed over the self-immolation of Tibetan monks. Every life is precious, self-immolation goes against Buddhist doctrines. Those who support, instigate and did this act are also against morality and should be severely punished." He was, of course, pointing a finger at the Dalai Lama.
Padma Choling added:


The Chinese government respects freedom of religion and normal religious activities of the Tibetan people. I think human life is the most precious thing, whoever commits self-immolation is wrong and immoral. Everyone enjoys the freedom of speech nowadays, and it is not necessary to take extreme and aggressive behaviour.

This sounds like the same old style propaganda.
Zhao Qizheng, the spokesman for the annual session of the National Committee of the Chinese People's Political Consultative Conference (CPPCC), squarely blamed the Dalai Lama: "According to what I have heard, he [the Dalai Lama] publicly applauded the courage of these people who set fire to themselves."
It is not true, to my knowledge, the Dalai Lama expressed himself only once on the subject. A couple of months ago in Tokyo, he declared: "These incidents of self-immolation are very very sad. The leadership in Beijing should look into the ultimate cause of these tragic incidents. These Tibetans have faced a tremendously desperate situation, otherwise nobody will commit such drastic acts."
However, The China Daily said: "Evidence showed that the riots and assaults were planned beforehand and instigated by trained separatists, according to the Sichuan government's information office."
During a press conference at the NPC, Wu Zegang, the Deputy Party Chief of Ngaba (Chinese: Aba) dismissed the motivations of the victims; in fact he tried to defame them: "Some of the suicides are committed by clerics returning to lay life, and they all have criminal records or suspicious activities. They have a very bad reputation in society."
Wu added that those who had immolated themselves in Aba were shouting pro-independence slogans. It was a proof that the movement was "orchestrated and supported by Dalai Lama and Tibetan independence forces".
What the Chinese leaders fail to mention is the oppressive system put in place after the Fifth Tibet Work Forum in 2010.
As mentioned in an earlier posting, policies reminiscent of the Cultural Revolution have been initiated in Tibet; for example, it was decided to send 21,000 Han and Tibetan Party officials in teams of four to each of the TAR’s 5,453 administrative villages.
Further, according to The Tibet Daily, the United Front Department decided to promote the “Nine Haves Monasteries” 九有寺庙

1.    有四位领袖像 Have a poster of the four national leaders
2.    有国旗 Have a national PRC flag
3.    有道路 Have a (motorable) road (to the monastery)
4.    有水 Have a good source of water
5.    有电 Have electricity
6.    有广播电视 Have a broadcast TV set
7.    有电影 Have (the capacity) to show films
8.    有书屋 Have a reading room for books
9.    有报纸（《人民日报》、《西藏日报》）Have The People’s Daily and the Tibet Daily newspapers (both have Tibetan language editions)
The Party added that all expenses will be met by the TAR Government.

Another scheme: the  ‘The Six Ones’ was also started.

1. Make one friend. Each temple management official should try to be soulmates with one or several monks/nuns to understand their difficulties in life and what's going on in their mind. (要交一个朋友。每个驻寺干部都要与一至几名僧尼交成知心朋友，及时了解他们的生活困难和思想动态。)

2. Visit one family. Each temple management official to visit the families of one or more monks/nuns to understand what's going on in their homes.  (开展一次家访。每个驻寺干部都要联系一至几名僧尼，深入自己所联系的僧尼家中搞一次家访，切实了解僧尼家庭的实际情况。)

3. Solve one problem.  To solve the most urgent, real problem facing the family of any monk/nun so as to make them feel the warmth of the party and government. (办一件实事。发挥各自优势，为每个僧尼家庭解决一件最迫切、最现实的困难和问题，让他们切身感受到党和政府的温暖。)

4. Build one file. Establish a file for every monk/nun to document in a detailed fashion their personal and family situation. This will aid in preparedness, understanding and management.   (建一套档案。为每个僧尼建立一套档案，详细记录其个人信息和家庭状况，切实做到心中有数、底数清楚，便于管理服务。)

5. Keep clear one communication channel. Steady communications should be maintained between temple management officials and the families of monks/nuns through telephone, letters and house visits, so as to educate them to love the nation and love the religion, as well as to obey the law. (畅通一条渠道。通过电话、通信、家访等方式，建立起驻寺干部与僧尼家庭联系的稳定渠道，与其家人共同教育引导僧尼爱国爱教、遵规守法。)

6. Develop one mechanism. To build temple management committees (with full-time officials) that temple management officials, monks/nuns and families are jointly responsible for. This is to develop a mechanism for building harmonious model temples. (形成一套机制。建立起寺庙管委会（专职特派员）、驻寺干部、僧尼、家庭共同负责、协调联动的构建和谐模范寺庙的好机制。)

Like for the Nine Haves, it is a mixture of good policies with draconian ones.
One understands in these circumstances that some young monks or nuns who have not witnessed the Tibetan uprising of 1959, the Martial Law in Tibet in 1988/89 or the riots of the early 1990's, are desperate.
When will China get leaders such Hu Yaobang, who can realize the folly of a ever more oppressive and repressive system.