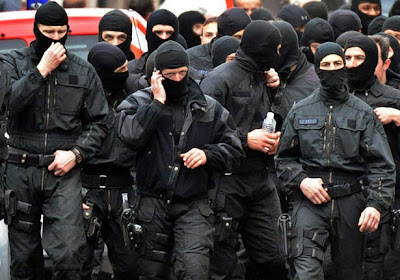 Do you know how Rasputin died? Guseva, a prostitute, planted a knife into Rasputin's abdomen and screamed, "I have killed the antichrist!" Tsar Nicholas II’s Machiavellian advisor however recovered. Later, he was served cakes and red wine with cyanide; he still did not die. He was later shot ‘dead’, but managed to escape. Several more bullets would be necessary to finish him off.
The RAID (Research, Assistance, Intervention, Deterrence), the crack commandos attached to the French police responsible to arrest 23-year old Mohamed Merah compared the young French of Algerian origin to Rasputin.
After the deaths of three French paratroopers, three Jewish schoolchildren and a rabbi, shot dead at a 4-day interval in the Southern cities of Montauban and Toulouse, Merah became the most-wanted person in France
When after a 32-hour standoff, the elite commandos entered his house, in which Merah had barricaded himself, they were received by volleys of bullets. The RAID had no choice but to return fire.
Merah received some 30 bullets, mostly in the arms and legs (a few of them piercing through his bullet-proof jacket) before he finally collapsed.
During the early negotiations with the Police, Merah had agreed to surrender, but later the RAID discovered that he had used these ‘talks’ to meticulously plan the fortifications in his house, particularly the shower where he rested during the night to be prepared for the final assault.
A neighbour had informed the Police: “he is like a cat, he practiced jumping over cars.” One of the commandos who participated to the assault told Secret Defence, a well-informed defence blog, “He was physically extremely impressive. He was shooting very fast (with three guns), moving at the same time. I have never seen such an efficient guy, except amongst us (RAID commandos).”
The entire episode however raises several questions.
In recent years, no event has stunned France as much as the awesome killings of military personnel and the Jewish kids. The precision, the ‘skills’ of these cold-blooded murders sent the French Government into a frenzy.
Further these events occurred only a few weeks before the crucial Presidential elections in which the outgoing President is far from the favorite.
Any faux-pas could have proved fatal for both Sarkozy or Hollande, the main contenders. Retrospectively, one can say that the 10 declared candidates have kept a decent posture, unanimously condemned the killings in the strongest terms and supported the police action.
Many thought that the incident and the 24-hour media spotlight on Toulouse could help boost the chances of Sarkozy to come back in the pre-poll surveys. It may not be the case, mainly due to what experts called the goof-up of the RAID. I still remember, one Indian commando, speaking on Indian news channels during the operations of 9/11 in Mumbai, explaining, “we are trained to kill”. It is not the case of the 168-personel RAID force; they are taught to catch terrorists alive. One can easily understand that a live jihadist will give more information than a dead one; Mohammed Ajmal Kasab is the best example.
From this angle, the RAID operations were a failure, but could it have been otherwise with the highly trained and heavily armed Merah? The comparison with Rasputin speaks for itself.
Should the Intelligence agencies, mainly the DCRI (Central Direction for Internal Intelligence) have been more vigilant?
Many voices, including the Foreign Minister, Alain Juppé, have raised some concern: “I understand that the question can be asked, was there a flaw or not, one should bring some light on this”.
The DCRI answers that since 2011 they had a file on Merah; one official told Le Monde: “Cases like Merah’s, are most difficult for us”. Merah apparently went through a ‘self-radicalization’ after several trips to Afghanistan and Pakistan in 2010 and 2011, but he did not belong to any known networks.
When in November 2011, he was interrogated by the DCRI about his trips to Af-Pak, he showed the officer ‘touristic’ pictures.
Intelligence agencies believe that if this type of individual encounters known jihadist groups, the surveillance level needs to be upgraded. According to the DRCI, hundreds of young Westerners visit the tribal zone, without automatically being a hard core terrorist.
While Merah’s brother, Abdelkader had the perfect physical and moral profile of a jihadist (he has also been arrested), Mehra had a more atypical profile; he was even seen in a night-club a couple of weeks before the attack. That is why, tighter tailing was not considered necessary. It is at least the justification of the DRCI whose close links with Sarkozy can explain their retrospectively guarded approach: “one can’t illegally watch someone who has not demonstrated his dangerousness”, an expert told Le Monde.
The fact remains that after being arrested in Kandahar, Merah was on a U.S. no-fly list kept by the FBI forbidding him to fly to the US.
Probably a serious slip-up for the French Intelligence; but a more worrying perspective is the emergence of atypical terrorists on the jihadist scene!
Posted by Claude Arpi at 4:21 PM