Where are the 'Emergency Papers'? 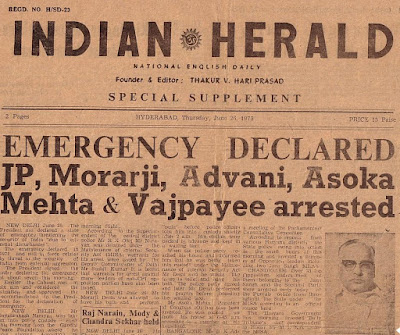 This is frightening.
I have often written about the declassification of Indian  historical papers, but if the Government decides now to destroy documents so that the Indian public does not have access to the history of the Nation, it is even worse.
Let us hope that the 'emergency papers' will soon be found.


I am not at all satisfied with the noting on this file by Intelligence or by the Director of Archives. The papers required are very old, probably over thirty years old. No question of secrecy should apply to such papers, unless there is some very extraordinary reason in regard to a particular document. In fact, they should be considered, more or less, public papers. To say that they can only be seen by research scholars is not very helpful. Any person can become a research student for a time. The mere fact that he is investigating some matter may make it necessary for him to look at some old papers. Also the fact that a Communist wants to see them is irrelevant.

Emergency files: Papers safe but PMO clueless
New Indian Express
By Vishwas Kumar
25 Mar 2012
NEW DELHI: Minister of State in the Prime Minister’s Office V Narayanasamy’s statement in the Lok Sabha on Wednesday stating that ‘even after a thorough search, the documents pertaining to imposition of Emergency could not be traced in the Prime Minister’s Office (PMO) records’, has surprised RTI activists as they have been in the public domain since September 2010, courtesy the National Archives of India (NAI).
After a hard-fought battle, M G Devasahayam, an IAS officer who served as Chandigarh district magistrate during Emergency got the documents through an RTI application from the NAI, as early Sep 2, 2010.
Narayanasamy’s reply in the case of RTI activist Subhash Chandra Aggarwal’s application becomes curious as the same PMO in 2010, in response to the Devasahayam’s similar application on Emergency documents, had referred it to the Home Ministry and then to the NAI from where the documents were finally obtained.
The matter become even more curious as Devasahayam’s fight to get the Emergency documents was extensively reported in newspapers in 2010.
In fact, documents obtained from the NAI had revealed that except for the document signed by Gandhi and sent to the then President Fakhruddin Ali Ahmed, all others were available.
While the original proclamation bearing Ahmed’s signature was part of the documents, there was only a typed copy of the PM’s top secret letter that had recommended imposition of Emergency under Article 352 of the Constitution.
The scrutiny of the file also revealed that the Home Ministry had obtained a copy of Gandhi’s historic letter from the President’s Secretariat.
Posted by Claude Arpi at 3:48 PM