The Hidden and Blessed Land of Mon 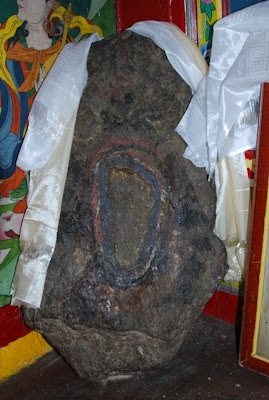 ‘Lama Geno’, in Monpa language could be translated as ‘The Lama knows’, or more freely, ‘here we are’. It is what Tsangyang Gyaltso, the young Sixth Dalai Lama, wrote in 1688 with his finger on a stone in Urgyeling, a village south of Tawang, the headquarters of the western-most district of Arunachal Pradesh.
A high delegation had just arrived from Lhasa looking for the reincarnation of the Fifth Dalai Lama who had passed away a couple of years earlier in Tibet. The boy was waiting to be ‘taken back’ to his Potala Palace in Lhasa.
It is just one of the numerous stories or legends in Monyul, (the ‘low land’) as Tawang is known. The Monpas are obviously fond and proud of these legends.
Being located near the tri-junction between India, Tibet and Bhutan, south of the McMahon Line, Tawang is today one of the most strategic districts in the country. The Government has however opened it to visitors (an Inner Line Permit is required for Indians and a Protected Area Permit for foreigners).

Long ago, the British created an ‘inner line’, separating these ‘excluded tracks’ from the plains. Though for a long time considered ‘backward’, one soon discovers a culture dating back several centuries; a first darshan of the imposing Gompa (monastery) towering over the valley in all its majesty, will remove all doubts about this.
Tourism is becoming a key to the economic development and the integration of these border areas, and will ultimately a factor for the defence of the frontiers as it gives a tremendous boost to the infrastructure.
In October 1962, when the Chinese entered the Indian territory north of Tawang, the Indian Army was woefully unprepared and the infrastructure inexistent. It was a watershed in Indian history. To keep a part of the Indian territory ‘excluded’ proved to be fatal and humiliating for the nation. 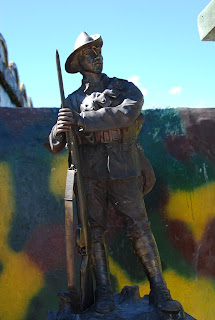 In January 2008, during a visit to Itanagar and Tawang, the Prime Minister announced a Rs 24,000 crores package for the State. Priority was given to connectivity (in particular, the construction of a Trans-Arunachal Highway).
As a result, the road between the plains of Assam and Tawang is the messiest construction site imaginable. The road has become the favorite joke of the local drivers, unstoppable on the subject; one can however take comfort in the fact that the work has finally started.
Reaching the Sela Pass, at 13,700 feet above sea level between Tawang and Bomdila (West Kameng District), you feel as if entering another world. But you are first reminded that the area was the theater of the 1962 Sino-Indian conflict. A Memorial dedicated to Jaswant Singh, the heroic rifleman who defended the pass and earned a Maha Vir Chakra in November 1962, is a sort of mandir in memory of the brave jawan. It is a compulsory stop for all Army personnel, as well as tourists (more than 95% of the visitors are presently from West Bengal). Looking at the old bunkers, one can imagine the incredible sufferings and bravery of the jawans and officers of the Indian Army, abandoned by an irresponsible leadership (a visit to the 1962 War Memorial in Tawang is also a must). 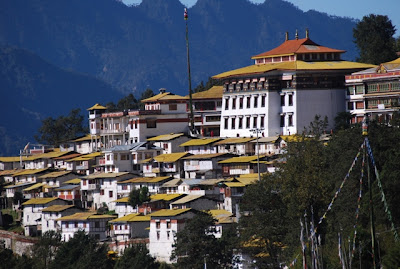 Two hours later, the first glimpses of the Tawang Gompa perched on one of the highest hills overlooking the Tawang Chu Valley (‘chu’ is ‘river’ in Tibetan/Monpa) are breathtaking.
For the past three centuries, life in Monyul has been centered around the Gompa, the fountainhead of the Buddha Dharma for some 30,000 Monpas and other Buddhist ethnic groups (like the Sherdukpens).
The history of the location of the Gompa is most interesting: a monk called Mera Lama, born in Kitpi village near Tawang, spent several years in Tibet before returning to his native place. Before leaving Lhasa, he met the Fifth Dalai Lama who asked him to propagate the Dharma in Monyul and establish a large monastery with the help of the local population.
The legend says it is Mera Lama's horse who found the location of the new monastery. It became known as Tawang Gompa: in Monpa dialect ‘ta’ means ‘horse’ and ‘wang’ ‘blessings’ (Tawang is ‘the place blessed by the horse’).
Today five hundred monks study in the Gompa, the largest Buddhist monastery in India under the dynamic leadership of a young Lama known as Guru Rinpoche. 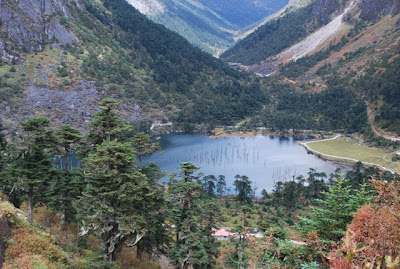 The Buddhists believe in the concept of sacred places or pithas. During the 10th century, the great Indian yogi Tilopa said that pithas are to be found inside your own self, though “outer pithas are mentioned in the scriptures for the benefit of simple fools who wander about the country”.
As a tourist, you may be classified as ‘a simple fool’ by siddhas, but you will tremendously enjoy visiting some other ‘outer’ places empowered by the Sixth Dalai Lama, Mera Lama or Guru Padmasambhava.
Most of the tour operators will tell you visit the ‘Madhuri’ Lake. After Rakesh Roshan shot Koyla (starring Madhuri and Shah Rukh), jawans posted in the area began calling it, ‘Madhuri’ Lake; it was a grazing pasture before becoming a lake after the dreadful earthquake of August 1950. Locals say that it is its USP, as there are as many 108 lakes in the area, many of them larger and more stunning, some having been blessed by great tantric masters and yogis.
A few kilometers away is the Tagtsang Gompa (the ‘Tiger Lair’ monastery), perched at 13,500 feet. It is one of the four pithas that Guru Padmasambhava, the great Indian tantric master who helped establishing Buddhism in Tibet, Bhutan and the Himalayan belt visited. The Guru is said to have traversed Tagstang in the form of a Tiger and subdued some powerful local spirits hostile to Buddhism. 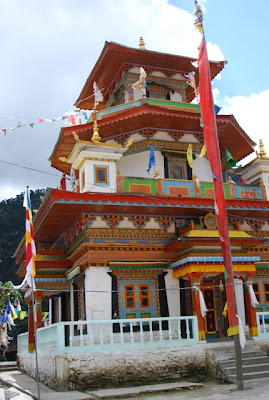 Another popular figure in Monyul is the great Mahasiddha Thangtong Gyalpo. Born in 1385 in Central Tibet, he traveled widely in the Himalayas. He is remembered in Buddhist history, not only for his teachings, but also for the iron bridges he constructed. He was a remarkable engineer and maybe the first Asian to understand the meaning of communication (seven centuries before it became the sign of our civilisation). His hagiography said he built 58 iron bridges and 118 boats to cross rivers. One of these bridges called Chaksam Bridge can be seen today across Tawang Chu near Kitpi village towards Mukto. The iron was of such high quality that it is still in use after 7 centuries. Thangtong Gyalpo is also the founder of the Tibetan Opera.
Another special place is the Gorsam Chorten (Stupa) which was built in the 18th century by a monk of Tsona monastery (located in Tibet). He wanted to make a replica of the Bodhnath Stupa in Kathmandu. He is said to have traveled to Nepal and made a perfect model carved in a radish that he managed to conserve and copy once back in Gorsam.

Another name of the Land of the Monpa is ‘Mon Payul Kyinochung’ which means the ‘hidden and blessed land’. This brings a familiar concept in the Himalayan literature: the esoteric concept of ‘Hidden Land’, an initiation is required to enter this region.
Till recently ‘hidden lands’ had a literal meaning in Tawang, but with the relaxation of the Inner Line Permit system, the region is today accessible to all (the initiation being the two-day journey on the road from Assam to Tawang).
The beauty and the sacredness of the sites, the serene atmosphere of the mountains, the luxuriant flora and the gentleness of the local population of Arunachal can make the most tense citywalla relax and take him to another dimension.
Posted by Claude Arpi at 7:08 AM