1962: Could history repeat itself? 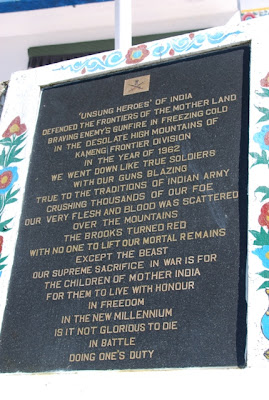 On October 20, very few in India remembered that 49 years ago, the Chinese People’s Liberation Army massively attacked India.
The brunt of the aggression occurred in Tawang district. Since then, the names, Thagla ridge and the Namkha Chu have become synonymous with defeat, humiliation and shame.
The Wiseman will say: ‘past is past’; but the question remains, could the debacle be repeated?
In recent months, the Indian press has been full of the amazing infrastructure development north of the LAC: new airports, four-way highroads, five-star hotels, and a railway line coming closer and closer.
Wanting to find out for myself, I travelled to Tawang. Though most of the border areas are still ‘restricted’ to ordinary citizens, after spending a few days in Tawang and listening to the local people (the taxi drivers are usually the most loquacious), one gets a fair idea of the situation.
The answer to my question is definitively, ‘No, 1962 will not be repeated”.
During the last decades, many things have changed in India. Just after independence, the principles of the administration of the Northeast were laid down by Verrier Erwin, the guru of soft integration of tribal areas: “we should avoid imposing anything on the local people".
It had disastrous consequences as far as infrastructure was concerned. In October 1962, when the Chinese entered Indian territory, north of Tawang, Nehru was forced to wake up from his romantic dreams.
In January 2008, during a visit to Itanagar and Tawang, the Prime Minister announced a Rs 24,000 crores package for the State. The priority was given to the roads (in particular, the construction of a Trans-Arunachal Highway).
With the road being enlarged between the plains of Assam and Tawang, one drives on the messiest imaginable construction site. It is the favorite topic of local jokes: some say that if the Chinese dare to come again, they will break their vehicles and their noses; others curse the Army’s Border Road Organization for having started to work on all the stretches simultaneously. The fact remains that the present state of the road is not propitious for an armed conflict. 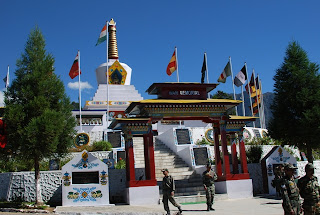 There are other differences between 1962 and 2011: the then foolish leadership did not dare to use the Air Force, it will not be the case today; especially after a full squadron of Sukhoi-30 aircraft have been deployed at Tezpur air base in Assam (another squadron has been brought to Chabua in Upper Assam).
Further, the IAF is planning to open six Advanced Landing Grounds, as well as several helipads in areas close to the border.
If India was attacked today, it would not remain a localized conflict like in 1962; any Chinese misadventure would trigger an ‘all-out’ conflict. The Chinese are aware of this.
It has been in the public domain that two new infantry divisions (with their headquarters in Zakama in Nagaland and Missamari in Assam) have been raised and that the Government is looking for a place in the Northeast to set up the headquarters in of a Mountain Strike Corps.
Walking in the bazaar in Tawang, one has a feeling of a harmonious relation between the Army and the local population. This is a crucial factor which was not here fifty years ago. I was told that some villages fully supported the invading Chinese troops in 1962. This explains how the PLA was able to build a road from Bumla, the border pass, to Tawang in 18 days. One can imagine the amount of accurate intelligence required for this feat. This type of situation does not exist in Tibet where the alien PLA has to deal with a resentful local population.
Though it cannot be construed as a sign that nothing untoward could happen, today there is a relative peace and bonhomie on the border. Indian tourists can get a pass from the Deputy Commissioner’s Office for a darshan of Tibet at Bumla border post. I was told that on October 1, 300 Indian and Chinese visitors participated in a mela on the occasion of China’s Republic Day. The general comment was that Chinese noodles are not as good as Indian parathas and sabzis.
Lastly but most importantly: the local Monpa population is amongst the most patriotic in India. Though the Chinese propaganda calls this area ‘Southern Tibet’; this will never be accepted by the local population. Once, there was a demonstration of the local population chanting Dudh mangoge to kheer denyenge, Aruncahal mangoge to chir denyenge (you ask for milk, we give you kheer; you ask for Arunachal, we give you arrows).
If China wants again to ‘teach a lesson’ to India, it will be a Himalayan task, and in the process, the PLA may get a ‘bloody nose’, as they say in the Army.
Posted by Claude Arpi at 6:40 AM