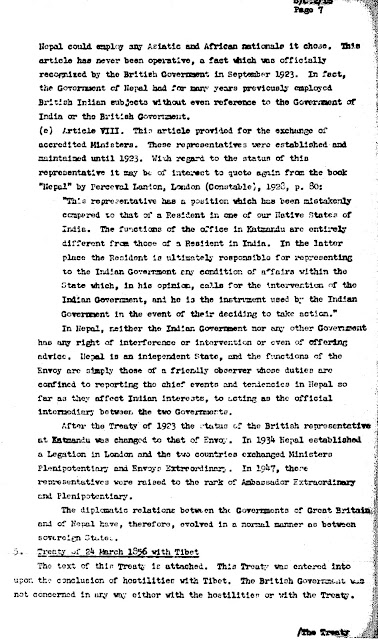 This document confirms that Tibet was an independent nation in 1949.
Interestingly, many historians questioned why did Lhasa not request Nepal for military help in October 1950 when the PLA's Second Army entered Chamdo, in Eastern Tibet.
An extraordinary coincidence occurred, on October 7, 19050, the day the Chinese forces crossed the Yangtze to advance towards Chamdo, there was a coup in Nepal.
Here is is what I wrote in my book, Tibet: The Lost Frontier:

Instead of trying to look in the history books, one should perhaps be looking at the stars. What was going on this 7th day of October of the Fateful Year?
Peng Dehuai was taking over the Chinese Army on the Korean front and leading the Chinese Dragon in one of the most devastating war.
Thousand of miles eastwards, Deng Xiaoping was invading a small peaceful country living in its Buddhist paradise and down South a revolution was brewing in another Himalayan kingdom of Nepal.
King Tribhuvan and his family had to ask asylum in the Indian Embassy in Kathmandu. In Nehru words: “There has been a great deal of friction for sometime past between the King and the Prime Minister”.
Nepal had been administrated for the past two hundred years by the Rana family who were known as Maharaja and holding the post of Prime Minister of Nepal. The Kings who belonged to another family were just a figurehead.
But lately, King Tribhuvan had been trying to introduce popular reforms which had been resisted by the more traditional Maharaja Mohan Shamsher, a Rana.
A week before the ominous day, the tensions had grown worse between the King and his Prime Minister. The King had asked the Indian Embassy in Kathmandu if he and his family could be given protection as he was fearing for his life. The Rana Prime Minister was resenting more and more the reforms as a personal attack against his rule and as an interference of the democratic India at his door steps.
Nehru continued: “Efforts were made by the Prime Minister to get the King to abdicate, but the later refused to do so”.
At this point of time, CPN Singh, the Indian ambassador to Nepal convinced the Indian Prime Minister that the King should be given shelter and protection. Nehru agreed.
The Prime Minister’s son went to the embassy to try to pressurise the King to abdicate, but Tribhuvan sure of the Ambassador support reiterated that he was no question for him to abdicate.
On the same October 7, the Rana Prime Minister decided to crowned one of the King’s grand son (through Tribhuvan had not abdicated) and make him the next king of Nepal. In the midst of the Himalayan high drama, Delhi decided to act firm and refused to accept the new King and stand behind King Tribhuvan.
Was the coup in Kathmandu linked with the attack on Chamdo or the crossing of the 38th paralell? It is difficult to say, but though there are apparently no links, it is sure that infiltration of the Communist forces had begun in Himalayas.

Retrospectively, one understand that it was difficult for Nepal to intervene in Tibet, so legally the Himalayan Kingdom was bound to do so.


The Forgotten History of Tibet's Role in Nepal's 1949 UN Application
Tibetan Political Review
October 12, 2011
On September 23, 2011, Palestinian President Mahmoud Abbas formally submitted Palestine’s application for United Nations membership to Secretary General Ban Ki Moon. At a minimum, Palestine appears set for recognition by the General Assembly as a nonmember state, on par with sovereign Vatican City, which will be an important step forward for Palestine from its current observer status. This drama, which is playing out at the UN headquarters in New York, highlights the UN’s role as a main source of legitimacy in interstate relations and international affairs. It also leads us to recall Nepal’s application for membership to that body 62 years ago, which prominently cited Nepal’s “diplomatic relations” with Tibet as proof of its sovereignty.
At the time, Nepal explicitly recognized Tibet as an independent country, including in its official application to the United Nations. This fact, which we explore below, recalls the strong historical ties between the peoples of Nepal and Tibet. Although Nepal currently has a “one-China” policy that recognizes Tibet as part of the People’s Republic of China (PRC), it is worth remembering that this is only recent history. The domineering presence of the PRC in Nepalese affairs is a relatively recent disruption that cannot erase from historical memory the enduring Nepali and Tibetan relations across the Himalayas.

NEPAL’S EXPLICIT RECOGNITION OF TIBET’S SOVEREIGNTY
When Nepal applied to join the United Nations, it was required to submit proof that it was a sovereign state with the capacity to enter into relations with other states. Tibet Justice Center has made available a copy of Nepal’s application package of July 22, 1949. (You can download the copy at http://sites.google.com/site/legalmaterialsontibet/home/nepal-un-app)This application clearly shows that Nepal considered Tibet a sovereign state.
On page 9, the application describes Nepal’s “Diplomatic Relations”. It states:
The Diplomatic Relations of Nepal with the United Kingdom have already been described in paragraph 4(e) above. In addition, Nepal has established diplomatic relations with the following countries:
(a) Tibet. In 1856 Nepal established a Legation at Lhasa, maintained representatives at Gyangtse, Kuti and Kerung.
(b) France….
(c) United States of America …
(d) India…
(e) Burma …

Nepal apparently considered its relations with the “country” of Tibet to be second in significance only to its relations with Britain, and even more significant than its relations with the USA or India.
Nepal’s UN application also included a copy of the text of the 1856 peace treaty between Nepal and Tibet, as additional proof of Nepal’s foreign relations with other countries. Incidentally, this treaty committed Nepal to aid in Tibet’s defense. (Article 2: “[S]hould troops of any other Raja invade Tibet in future, [Nepal] will afford such assistance as it can.”)
Based on the sufficiency of this application, the United Nations admitted Nepal as a member state on January 14, 1955.

CHINA’S ATTEMPTED COVER-UP
China subsequently tried to cover up this inconvenient historical truth. On September 20, 1956, China and Nepal signed an “Agreement to Maintain the Friendly Relations Between China and Nepal and on Trade and Intercourse Between the Tibet Region of China and Nepal”. Article 3 of this agreement stated that “All treaties and documents which existed in the past between China and Nepal including those between the Tibet Region of China and Nepal are hereby abrogated.”
This provision was an attempt by China to cover its legal bases by getting Nepal to annul its prior treaty commitments with Tibet, including the defense obligation of the 1856 Nepal-Tibet treaty. As a practical and political matter, this cover-up worked. Subsequent Nepalese governments have restated their position that Tibet is part of the PRC.
As a legal matter, however, the 1956 treaty is shaky. Its purported abrogation begs the question because Nepal’s Tibetan treaty obligations were with the “country” of Tibet. There were no treaties between Nepal and the “Tibet Region of China” to be abrogated, because Nepal did not recognize such an entity to have existed until 1956. This legal argument will not have much practical effect now, but it might be revived at an opportune time in the future.

NATIONAL DIGNITY IS A POWERFUL FORCE
Obviously, Tibetans will care about the historical fact that Nepal explicitly recognized Tibet as independent as recently as 1949, and indeed relied on its relations with Tibet to gain admission to the UN. But this fact is also a part of Nepal’s national history. Nepal’s relationship with Tibet deeply affects the social, political, cultural, and religious history of the Nepalese people themselves. It is a question of national dignity for both Nepalis and Tibetans.
For the Chinese government to try to change or cover over this history is an affront to the Nepalese people, and an act of historical imperialism. Because the justification for China’s occupation of Tibet depends on a historical fiction, China has sought to get others to play along with its revisionism. Yet despite China’s current success in bullying the Nepalese people into sometimes abrogating their own sovereignty and national history over the issue of Tibet, nothing can erase the documented fact that Nepal once recognized Tibet as an independent state at the United Nations in front of the global stage. The Nepalese people should not be bullied into denying their own national history.
Nepal has demonstrated some willingness to reject China’s interference in its affairs. On September 22, 2011 (the day before the Palestinian U.N. application), the Government of Nepal released a group of 23 mostly-teenaged Tibetan refugees into the care of the United Nations High Commission for Refugees. What made this act particularly notable was it was done despite the tremendous pressure China exerted on tiny Nepal. China wanted Nepal to return these refugees to Chinese-occupied Tibet, contrary to Nepal’s “Gentleman’s Agreement” concerning Tibetan refugees and the fundamental international law forbidding such refoulement.
Much has been written about how the Palestinian quest for statehood is in part a reaction to the indignities of life under occupation. In another more subtle sense, the Chinese attempt to dictate Nepal’s refugee policy was a matter of national dignity for Nepal. This was a Chinese intrusion into Nepal’s sovereignty, which Nepal repulsed. If we were Nepalese -- even if we cared nothing about the 23 Tibetans -- we would be happy that our government stood up for the dignity of its people and refused to be dictated to by Beijing.
Tibetans will continue to cross over the mountains in search of freedom from occupied Tibet. The next time another group of Tibetan refugees lands in Nepalese custody, we hope that Nepalese leaders will recall without fear or embarrassment that Nepal enjoys UN membership today based on a document in which it prominently highlighted its relations with the then-independent country of Tibet. Moreover, just as the Palestinian people are set to have their statehood finally recognized by the U.N., given the irrepressible desire of all peoples to be free, one day the Tibetan people may reach the same place.
Posted by Claude Arpi at 6:55 AM