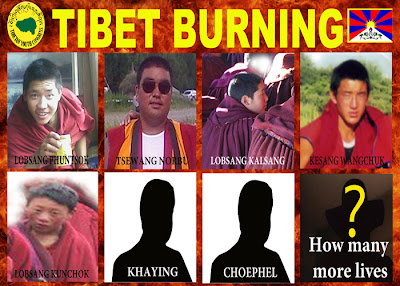 Monks and nuns in Eastern Tibet are immolating themselves.
They do this because they are desperate.
It is tragic.
After the unrest of March/April 2008, a Chinese scholar Zhang Boshu wrote an essay "The Way to Resolve the Tibet Issue". Born in Beijing in 1955, Zhang Boshu received an MA in economics from Zhongguo Renmin Daxue in 1982 and in 1985 passed the entrance examination for the Institute of Philosophy of the graduate school of the Chinese Academy of Social Sciences. He later held a post in the Philosophy Institute of the Chinese Academy of Social Sciences from 1991.
He thus explained the deep resentment of the monks and nuns in Tibet:


The governing authorities operate a 'reverse elimination' selection system among the leaders of the monks. Any monk leader who insists on religious principles, refuses to be a tool of the authorities, will be subject to pressure and purging or even sentenced to prison as a warning to other clergy. Any monk with a relatively high traditional rank who keeps silent, doesn't cause trouble is a candidate for recruitment by the United Front Department. He will be given rewards but a club will be always be ready to intimidate them. Any monk willing to be personal advancement first, who is opportunistic, gives up religious principles, and willing to be a tool of the government will be given all sorts ofadvantages, membership in the National People's Congress, the National People's Consultative Congress or even higher government positions. The green light will be given for their activities, resources will be provided so that they will be a model who can draw in other leaders among the monks." In sum, therefore, although the Chinese Communists boast of religious freedom but their religious policy is aimed at the destruction of Buddhism, no less than it was in the days of Mao Zedong. Mao Zedong wanted to completely extirpate Buddhism. In Tibetan history there were eras when Buddhism was extirpated yet Buddhism still continued because the religion lived in the hearts of believers and so could not be destroyed by an external force. Today the Communist Party religious policy is aims at the degeneration of the monk stratum of Tibetan society. This is a mortal danger to Buddhism.

As a consequence of all this, although Tibet has made considerable economic progress over the past thirty years and the lives of ordinary Tibetans have improved, but Tibetans are still dissatisfied and 'events' occur over and over in the Tibetan regions. The Tibetan issue is still 'an issue' that is the focus of constant international attention. Ever since that have occurred since March are just new developments in the course of this ongoing transformation.

Can the Chinese authorities look at the situation and understand that repression has never (and will never) solve the Tibetan issue.

A Tibetan nun dies after self-immolation, Situation in Tibet spiraling out of controlPhayul
October 17, 2011
Sherab Woeser
DHARAMSHALA, October 17: Reports coming out of Tibet confirm the demise of yet another Tibetan, this time a nun, after she torched her body in an apparent protest against China’s continued occupation of Tibet.
Tenzin Wangmo, around 20 years of age, set herself on fire at around 1 pm local time in the Ngaba region of eastern Tibet today.
The exile base of Kirti Monastery, citing eyewitnesses, in a release today said that Tenzin Wangmo self immolated on a crossroad near her monastery, the Mamae Dechen Choekhorling Nunnery, about 3 kms away from Ngaba County.
“Tenzin Wangmo was engulfed in flames as she marched on the streets for nearly 7 to 8 minutes raising slogans calling for the return of His Holiness the Dalai Lama from exile and religious freedom in Tibet,” the release said.
Tenzin Wangmo died immediately.
According to the release, nuns from the Mamae nunnery carried Tenzin Wangmo’s body to the nunnery and despite repeated warnings from Chinese security personnel, refuse to give possession of the deceased’s body.
“The Chinese authorities have given the nuns an ultimatum to either hand over the deceased’s body or bury Tenzin Wangmo’s body by tonight,” the release said.
The situation around Mamae nunnery, which is the largest nunnery in the Ngaba region with over 350 nuns, is being described as tense.
This is the ninth incidence in this year alone when a Tibetan has been driven to the extreme sacrifice of burning one’s own body as a last resort of peaceful action against the Chinese government’s repressive policies in Tibet.
The first 17 days of October has already witnessed five self-immolations in Ngaba region.
Khaying, Choephel, and Tenzin Wangmo succumbed to their injuries while Kesang Wangchuk is being described in critical condition. There is no information as yet on the whereabouts of Norbu Damdul who was last seen being taken away by Chinese security personnel on October 15.
The Central Tibetan Administration in a release earlier today said that His Holiness the Dalai Lama will be presiding over the “grand prayer service to mourn the tragic self-immolations in Tibet” scheduled for October 19 in Dharamshala, north India.
Posted by Claude Arpi at 6:57 AM