Sixty year years, a Tibetan delegation led by Ngabo Ngawang Jigme was forced to sign a Seventeen-Point Agreement in Beijing.
I have already written about the conditions under which the Agreement was signed.
Read about it in my previous postings.
I am posting today an extract from the biography of the Dalai Lama (Freedom in Exile). He was in Dromo in Chumbi valley near the Indian border (Sikkim).
He vividly recalls these dramatic events.
Article One says: "The Tibetan people shall unite and drive out imperialist aggressive forces from Tibet; the Tibetan people shall return to the big family of the Motherland-the People's Republic of China".
It was a capitulation for the Tibetans.
The Chinese call it 'liberation'.
The recent events of Kirti monastery demonstrate that 60 years later the Tibetans have not capitulated. 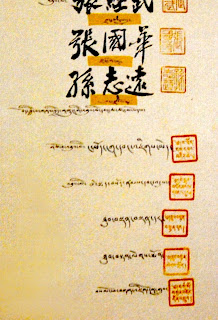