If France can intervene in Libya, why not in China 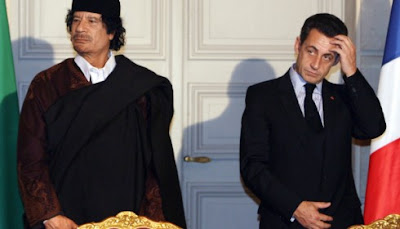 At the end of April, when President Sarkozy completed four years in office, his website published a series of reports entitled: 'Four years of Action'.
One of these reports, dedicated to the French Foreign Policy, says: "The foreign policy conducted over the past four years has helped make France stronger and more influential on the international stage. France is fully committed to peace and world security. ...France plays a lead role in tackling the major global challenges. Everywhere, she defends the interests of France and the French."
But, what are the interests of France?

Take the case of Africa
Since the beginning of the year, world events have taken an unexpected turn. Until recently, nobody had ever imagined popular revolutions in the Arab world. Who could have expected a year ago that Presidents Ben Ali or Mubarak would be thrown out by 'common men'?
Events went so fast that the French Government was caught on the wrong foot. The Minister of Foreign Affairs, Alliot-Marie had gone holidaying to Tunisia, enjoying the hospitality from a close associate of President Ben Ali who till then was a great friend of France.
Alliot-Marie had eventually to resign for not having sensed the change of wind, but for President Sarkozy the episode was a serious reminder that the Presidential elections were barely 14 months away; his popularity had reached a historical low with a large majority of French disapproving of his policies and Marine Le Pen, the extreme right candidate, doing better than him in the surveys for the 2012 Presidential elections.
Was he not defending the interests of the French people? It is probably why he decided to take a more belligerent stand.
The grim situation in Ivory Coast was the first occasion for Sarkozy to show La Grandeur (greatness) of France. The Libyan 'revolution' against a 'tyrant' was the next.
In Libya, the situation was more complicated than in the Western African country and the (oil) stakes are higher.
Remember 2007. Gaddafi had planted his tent not far from the Elysees Presidential Palace; the Libyan leader was said to be 'a bastion of secularism in the Arab world' and 'a great friend of France'.
When Rama Yade, the junior minister of Foreign Affairs said that "tyrants were wiping their bloodied boots on the doormats of France", she was severely reprimanded by the Presidency and eventually dismissed.
The President probably had this in mind (as well as the Alliot-Marie Tunisian blunder) when he decided to push for a UN resolution on Libya. If the French President's advisors thought it would be easy, they were wrong.
On 17 March 2011, the United Nations Security Council agreed to Resolution 1973 introduced by France and UK. It was passed by a 10-0 margin and five abstentions (the BRICS nations, minus South Africa and Germany abstained). Resolution 1973 imposed a no-fly zone over Libya and authorized the use of all necessary means, except a 'foreign occupation force', to protect civilians and civilian-populated areas.
Already many doubted that it would be easy to dislodge Gaddafi and some warned that the new coalition could get bogged down in a new Iraq or Afghanistan-like War. But Sarkozy and Cameron were too impatient in wanting to take revenge on the 'tyrant'.
Sarkozy was in so such of a hurry that military actions are said to have informally started two days before the UN Resolution when a French plane opened fire and destroyed an armed vehicle on Libyan soil. To stop Gaddafi seemed a child's game at that time.
Unfortunately for the Allies, the Libyan troops faithful to the Colonel adapted and soon after the destruction of their main air-defense system; they began to use guerilla warfare with ordinary vehicles indiscernible by the NATO satellites.
While the pro-Gaddafi troops have a leader and a military tactic, it is often not the case for the insurgents. Six weeks after the first strikes, Gaddafi is still around.
Despite the grand show and tall claims of Bernard-Henri Levy, the self-styled French philosopher-turned war advisor of Sarkozy, the 'rebels' are not a homogenous group and do not represent all the Libyans.
A French defence expert wrote on his blog: "We, French have too much contempt for our enemies. Did we expect that they will just run away after the first passage of a fighter plane in the sky?"
The other difficulty is that the coalition is extremely fragile, with the United States having partly abandoned the boat and others increasingly reluctant to go after Gaddafi.
Since then, Sarkozy, the Chef de guerre has become more lonely; though the British and the Italians are still on board, other coalition members play a minor role, while nations such as the BRICS are dead against any intervention (though the Indian PM asked his BRICS' colleagues to remember that recent events in the Arab world 'represented a shift of power to the ordinary citizen').

The Military operations
In this nightmarish situation, there is a positive aspect for Paris. The Rafale has done quite well, somehow better than the Typhoon (also known as Eurofighter), its remaining rival in the 126 MMRCA tender of the Indian Air Force.
The Eurofighters often remained on their bases; they were not 'polyvalent' enough according to some French defence sources (being more a combat aircraft than a 'bomber').
A French defence blogger analyzed: "The timing of the warlike adventure against Gaddafi is perfect, just a few days before the announcement of a short list for the MMRCA contact."
It did not probably influence the IAF which had completed its assessment much earlier, but there is no doubt that the outcome of the 'Libyan war' will be studied closely in Delhi as curiously both the planes involved in the Libyan operations have been preselected by the IAF for 126 MMRCA, the 'contract of the century'.
With the French and the British taking the main lead, one of the main issues was that they could soon run out of bombs. An article in The Washington Time (NATO runs short on some munitions in Libya) affirmed: "Less than a month into the Libyan conflict, NATO is running short of precision bombs, highlighting the limitations of Britain, France and other European countries in sustaining even a relatively small military action over an extended period of time."
This demonstrates the limits of the ability by European nations to conduct a sky-war. The problem was summed up by the same newspaper: "Although the United States has significant stockpiles, its munitions do not fit on the British and French-made planes that have flown the bulk of the missions."
These are some of the difficulties that an unprepared operation can face. One of the reasons offered for President Sarkozy's present unpopularity is his 'impetuosity'. Libya is a typical case.
The Libyan situation will probably not end soon. Gaddafi has still many supporters amongst tribal chiefs in Libya while several African heads of State who have been 'sponsored' by him in the past still respect him. This shows the limit of an 'interventionist' policy.
Further, there are plenty of tyrants on the planet, which one to chose? Should Western democracies also intervene in Syria, in Yemen, in Iran? And why not in China where the Tibetans are badly treated? President Sarkozy's advisors should have thought about this earlier.
For the French President the real issue is: How can he come out of the quagmire without losing face and points in the surveys?
It is nearly impossible, if the war goes on.
Posted by Claude Arpi