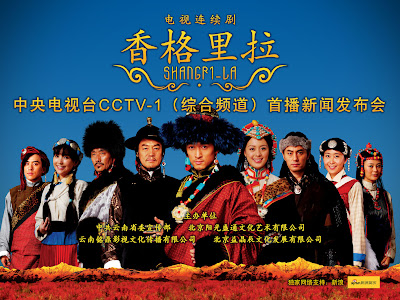 While repression is every day harsher on the Tibetan plateau, the Chinese TV (CCTV) has decided to offer to its mainland public, a new 'Tibetan' soap opera with purely Chinese characteristics.
Will it help create a better understanding between the different 'nationalities'? Certainly not.
One of the few Chinese who did an effort to understand the Tibetans was CCP General Secretary Hu Yaobang.
In May 1980 in Lhasa, during a party meeting organized to celebrate the 1951 Agreement, Hu gave a powerful political speech to some 5,000 cadres in Lhasa. The motto was 'Strive to build a united, prosperous and civilized new Tibet'. In the speech Hu listed a few tasks for Tibet. Hu very frankly admitted:


Our present situation is less than wonderful because the Tibetan people's lives have not been much improved. There are some improvements in some parts, but in general, Tibetans still live in relative poverty. In some areas the living standards have even gone down. We comrades in the Central Committee, Chairman Hua as well as several vice-chairmen, were very upset when we heard about this situation. We feel that our party has let the Tibetan people down. We feel very bad! The sole purpose of our Communist Party is to work for the happiness of people, to do good things for them. We have worked nearly thirty years, but the life of the Tibetan people has not been notably improved. Are we not to blame? If we don't make this clear, people won't let us off the hook; party members won't let us get away with it!

Wang Yao, an assistant of Hu Yaobang later wrote: “he was open and honest, dared to act, dared to face reality and dared bear responsibility.”
From the time of the ‘liberation’ till today, it was probably the first and the last time that a Communist leader accepted the Communist Party’s mistakes in Tibet and tried to remedy them.
'Tibetan' soap operas can only bring more tourists to Tibet; it will not build a bridge between Han and Tibetan cultures.

Tibetan TV series to be broadcast today
China Tibet Online
2011-05-06
Shangri-la, the newly produced TV series on intriguing Tibetan stories is all set for broadcasting through CCTV Channel 1 at 10:30 pm starting from May 6, 2011, news from its launching press conference Wednesday afternoon.
The 30-episode TV series, directed by HK director Jiang Jiajun (also director of a number of Hong Kong films in 1990s and recent mainland TV series), is starred with a troupe of first-line actresses and young actors.
Tibetan actor Tashi Dundrup is also acting a leading role in this story happened in 1930s, which is trying to probe the harmony and conflicts between human beings tangled with love, hatred and national responsibility.

"With many advanced filming techniques, we want to present conflicts among people from different backgrounds and Tibetan sceneries for audiences", said director Jiang Jiajun.
Different from "Shangri-la"-themed movies, the series try to present a whole picture of Tibet in more aspects, such as Tibetan Tusi (native chieftain, an old title in southwest China in Ming Dynasty and Qing Dynasty), local horse caravans, friendship between local people of ethnic minorities and the Red Army, Chinese people fighting against the aggression of the Japanese Army.

In addition to inviting Hu Ge, a popular image among young Chinese, and adopting the impressive fight choreographer used in film "Let Bullets Fly", a good number of horse-riding or gun-shooting battle clips between different groups have brought the producer more confidence about the ratings from the audience.
In the background, the TV series have used much picturesque scenery in Yunnan Province, e.g. ecological features from Shangri-la, Lijiang, Dali, Tsongzanlin Temple, Baishui Tai (said to be the origin of Naxi ethnic group), Hu Tiaoxia to Meri Snow Mountain.
Posted by Claude Arpi at 6:29 AM