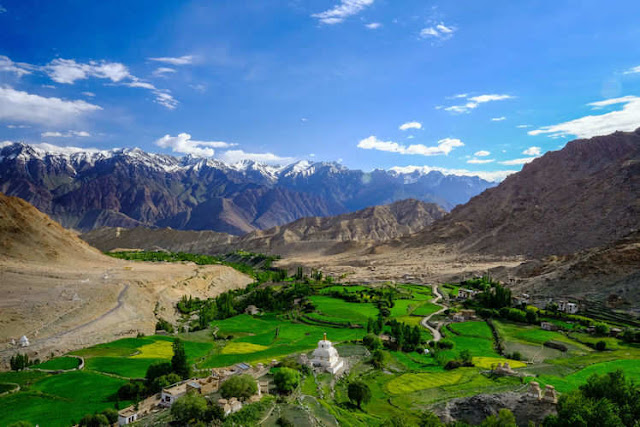 The tragedy is that for decades the leaders of the Valley and now of Jammu, have had a step-brotherly attitude towards Ladakh.

On November 20, news from the high plateau of Ladakh said that Thupstan Chhewang, the lone local MP had resigned from his Lok Sabha seat; hardly a month earlier the BJP had failed to win a single ward in the civic polls in the mountainous region.
Chhewang blamed his own party; he said that his “position became morally and politically untenable because the Centre failed to deliver on promises made during the 2014 Lok Sabha polls.”

Union Territory
In a letter to PM Narendra Modi, the former MP wrote: “All my pleas fell on deaf ears.” He spoke of delay in executing electoral assurances; Chhewang particularly mentioned the Union Territory (UT) status for Ladakh, the plank on which he had been elected (with a thin margin of 36 votes). He reminded the PM about the strength of slogans of five years ago, which now "sound like empty rhetoric".
Chhewang was particularly upset by the fact that the J&K State President Ravinder Raina had declared that the MP was 'opting for spiritual isolation'; “This is far from truth,” he asserted.
The tragedy is that for decades the leaders of the Valley and now of Jammu, have had a step-brotherly attitude towards Ladakh; for most politicians "one" seat is not so important and promises can be broken. These "leaders" forget that Ladakh is perhaps more strategically important than the Valley or Jammu; to neglect the border populations has never been a healthy practice for a nation. China knows this and in recent months has been trying to woo the Tibetan populations on their side of the LAC by building model villages with all sorts of amenities.
The demand for UT status has been a long-standing one. Already in 1949, a delegation of the Young Men’s Buddhist Association of Ladakh led by Kalon Chhewang Rigzin met Nehru in Delhi and presented him a memorandum: “We seek the bosom of that gracious Mother India to receive more nutriment for growth to our full stature in every way. She has given us what we prize above all things — our religion and culture.”
The Ladakhis were delighted to see the Ashoka chakra on the Indian flag; it was the Buddhist symbol of "goodwill for all humanity and India’s concern for her children". Unfortunately, Indian leaders did not respond to Ladakh’s appeal.
In 1989, the Ladakhis had no alternative but to resort to an "agitation", a concept alien to Buddhism. In 1995, after a long struggle, Ladakh was finally offered a Ladakh Autonomous Hill Development Council (LAHDC) as a compromise. Though the chairman and his Executive Councilors (ministers) have vast executive powers on paper, they are often faced with Srinagar holding the purse strings.

Promises broken
Since then, the big-brotherly (not too say arrogant) politics from Srinagar has continued. When the Government of India constituted a three-member interlocutor group to find out the way forward, a proposal separating Ladakh from the Kashmir Division and granting it divisional status was made, but this never materialised. Despite its crucially strategic location, the region has kept its low administrative status.
Another genuine demand from Ladakh has been a university for Ladakh. There is no doubt that a full-fledged university in Ladakh region is needed.
In a letter to the editor in The Daily Excelsior, a young Ladakhi wrote: “In absence of this university, the student community suffers a lot. Students usually have to go other places like Jammu, Kashmir, Delhi and other parts of the country for higher education. This entails a lot of money, which every aspirant here can’t afford.”
While Jammu and the Valley have their own State and Central Universities, Ladakh does not. It is not that the centre has not tried to disenclave Ladakh. Take the Zojila tunnel, the country’s longest Zojila tunnel – once it's completed.
Unfortunately, India’s leading infrastructure finance company (IL&FS), which is responsible for the project, is over Rs 91,000 crore in debt and recently defaulted on payments. Some have suggested rebidding, whatever decision is taken, the project will be delayed.

Urgent requirement
This brings serious doubts about the proposed all-weather motorable road from Manali through Zanskar, though a Border Roads Organisation (BRO) official recently affirmed that the cold desert region will be accessible in all weather conditions. Again an electoral promise?
It is certain that the future of Ladakh cannot be left to the local politicians, whether in Srinagar or Jammu.
Ladakh needs a special status with a chief secretary rank officer posted in the district. Just think that the Army 14 Corps Commander responsible for Ladakh’s defence is headed by an officer of lieutenant-general rank, with some 38 years of experience in the Indian Army. His civilian counterpart is the DC who would be the equivalent of a captain or a major at the most; to make things worse, the DC is also the chief executive officer of the LAHDC, making the situation even more ridiculous.
In these circumstances, the Ladakh Buddhist Association (LBA) organised a mega rally on November 26 to demand "Union Territory Status with Legislature for Ladakh". The meeting pledged that besides the UT demand, inclusion of Bhoti language in the 8th Schedule of the Constitution, declaration of Ladakh as a Tribal Area and establishment of a Central University in Ladakh.
The importance of Ladakh is that due to its geographical location, it has to face two enemies — the Chinese "Liberation Army" in the north and west and Pakistan in the east. It is high time that Delhi wakes up and realises that Ladakh is a "special" place requiring some nurturing.
Posted by Claude Arpi