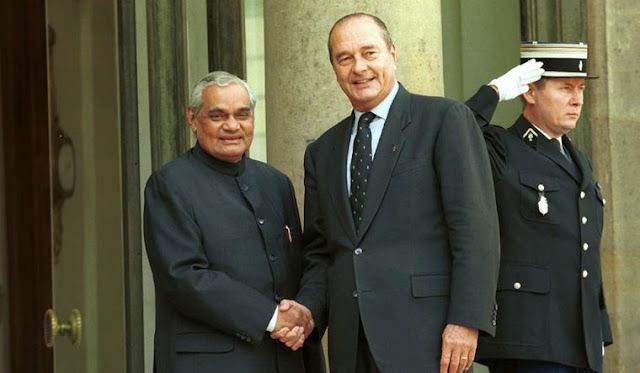 As my article Reliable Partner appeared in the Edit Page of The Pioneer, President Jacques Chirac, the third President of the French Republic, passed away.
He leaves a great vacuum on the French political scene.
I posting here a few lines that I wrote several years ago on the Indo-French Strategic Partnership, the first of this kind, initiated by President Chirac and Prime Minister Atal Bihari Vajpayee.
It remains a model for other partnerships.
Merci President Chirac and Prime Minister Vajpayee for this!

Here is old article on the Indo-French Relations
The most interesting aspect of the 90’s was the tremendous boost in bilateral relations given by the visits of President Chirac in January 1998 and Prime Minister Vajpayee’s trip to Paris later in the year.
The most striking feature was the setting up of a framework for a strategic partnership.
Before reaching Delhi, the French President had declared that he was keen on an “ambitious partnership”. Using a de Gaulle-like language, Jacques Chirac saluted India, “a nation which has affirmed its personality on the world stage”. He said that he had come to show that “France wanted to accompany India in its potent march [towards the future].”
Inaugurating a Seminar in Vigyan Bhavan, the French President elaborated on the nuclear deal. Reminding that “certain conditions are to be met ”, he however suggested to: “reflect, together with those of our partners involved, on the ways to reconcile our common will to cooperate and the necessary respect for the rules the international community has set itself”.
Nine years later, a similar language could be used by President Sarkozy when he visits Delhi in January 2008.
Chirac’s words were not mere political niceties.
When India conducted its nuclear tests in Pokhran in May, France was one of the few countries which did not condemned Delhi (or impose sanction). This was greatly appreciated in Delhi and when Prime Minister Vajpayee returned Chirac’s visit in October, the new strategic dialogue could take its first concrete steps.
These events set in motion a closer collaboration.
From the friendship mentioned by de Gaulle, the relation had become a partnership.
By putting proper structures in place, the dialogue was institutionalized:
The bilateral relations have benefited in several ways:
Exchanges have not been too successful so far. According to General Alain Lamballe (Retd), a former military attaché and expert in the Indo-French relations: “Both nations have not sufficiently explored the possibility to send young officers for training. It is the only guarantee to have a good reciprocal knowledge in the long term. India hesitates to put its officers in contact with foreigners, fearing compromises. ” If trust between the armed forces of the two countries increases, one can hope that there will be an improvement in this field.
In 2006, the Indian Navy called these exercises: “A Significant Indicator”. Explaining the background of the successful Varuna joint naval exercises, the Indian Ministry of Defence said: “In recent times the Indian Nary laid great emphasis on enhancing bilateral ties and interoperability with navies of developed countries through professional and operational interactions.” Varuna 07, a sea and air military exercise was held from the September 11 to 19, 2007, off the Somali coasts and in the Gulf of Aden in continuation of the exercises organized in March and April 2006 off the coast of Goa. The French contribution was then centered on the aircraft carrier Charles De Gaulle.
From 12 to 23 February 2007, the French and Indian Air Forces carried out the third edition of the Garuda series of air force exercises. Organized for the second time in India, this year exercise took place at Kalaikunda Air Force Station. The French Air Force participated with one Airborne Warning and Control System (AWACS) aircraft, four Mirage 2000-D Air-to-Ground fighters and four Mirage 2000-5 Air-Defence fighters. It was the first time that a French AWACS Aircraft came to India.
One of the many examples which could be given is the Defence Research and Development Laboratory (DRDL), a missile research laboratory under the Defence Research Development Organisation (DRDO) and the leading European company, MBDA Missile Systems, planning to jointly develop a new-generation low-level, quick-reaction missile (LLQRM). The $500 million project is aimed at developing the 35-kilometer Maitri quick-reaction missile, a blend of the French Mica and DRDO Trishul. MBDA will develop an active homing head, thrust-vector controls and missiles. DRDL will handle software, command-and-control, and integration.
Though President Chirac’s visit to India in February 2006 was marred by the Clémenceau controversy, it further cemented the close relations between the two nations. On the eve of the visit, France’s ambassador Dominique Girard had summed up the relations: “Our two nations now more than ever before have a major responsibility in relation to the rest of the international community and the promotion of peace and development. The strategic partnership that they have forged with one another must be based on sound and coordinated defence systems”. 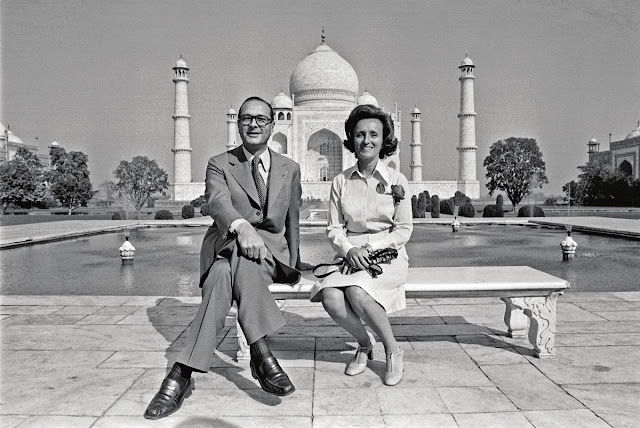 Here is my Pioneer's article on 'Reliable Partners'

France has had a long relation with India, particularly in the defence sector. One area where India can be of great help to it pertains to the transport sector