The US Ambassador in Lhasa 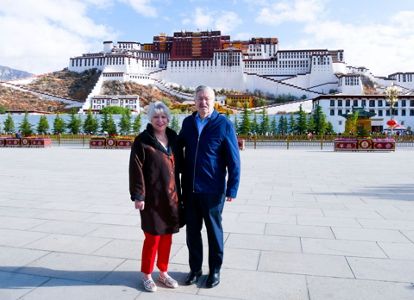 According to the State Department, the US Ambassador to China, Terry Branstad spoke his mind during a visit to the Roof of the World between May 19 and 25.
A Statement from Washington said that he “urged China to open ‘substantive dialogue’ with exiled Tibetan Buddhist leader, the Dalai Lama and give the Himalayan region’s Buddhists freedom to practice their religion.”
It was the first trip by a US ambassador since 2015.
During his tour, Branstad met “religious leaders and toured historic sites in Tibet Autonomous Region (TAR) and Qinghai Province”, Washington said, stating: “The Ambassador raised our long-standing concerns about lack of consistent access to the Tibetan Autonomous Region. …He also expressed concerns regarding the Chinese government’s interference in Tibetan Buddhists’ freedom to organize and practice their religion."
Branstad visited number of places such as the Potala Palace, the Jokhang Temple, the Norbulingka Palace and the Sera Monastery; he met with senior Tibetan religious and cultural leaders: “He encouraged the Chinese government to engage in substantive dialogue with the Dalai Lama or his representatives, without preconditions, to seek a settlement that resolves differences.”
All this was obviously not reported in the Chinese press.

Meeting with the Party Boss
More importantly, though not said in the US communiqué, Branstad met Wu Yingjie, Tibet’s Communist Party Chief, who explained the ‘huge achievements’ undertaken for guaranteeing the rule of law, religious freedom and traditional culture in the Tibet Autonomous Region (TAR).
According to the Communist Tibet Daily newspaper, Wu added that he “sincerely welcomed more American friends to visit” in the Region.
Before the visit, Beijing had announced that it hoped that the ambassador would come to the TAR with any prejudices.

The Encounter
A Chinese official website gave more details of the encounter between the US ambassador and the Party Boss; were also present the two Tibetan members of the Communist Party’s Central Committee, Lobsang Gyaltsen, the Chairman of TAR People’s Congress and Che Dalha, the Governor of Tibet.
Ding Yexian, a Deputy Secretary of the TAR in charge of ‘development’ also participated.
Other members of the TAR Party’s Committee Standing Committee in attendance were Norbu Dhondup, Pema Wangdi and Liu Jiang.
Missing, for obviously reasons was Lt Gen Xu Yong, the Commander of the Tibet Military Region and No 6 in the TAR Standing Committee.
Also missing  on of the Party's Deputy Secretaries Zhuang Yan.
None of the old Tibetan guard, principally, the head of the Tibet CPPCC, Phakpalha Geleg Namgyal, but also also Raidi, Legchok, Raidi or Pasang were seen around.
Other senior leaders such Sonam Rinchin, Jampa Khendup (Zonglo Tulku) and Lhaba a monk and Party cadre of Jokhang Cathedral were also seen on some of the photos.
The Chinese had obviously taken seriously Branstad’s visit.
The American too as the Ambassador's delegation was rather large.

Incidentally, the Chinese released only one picture (below). 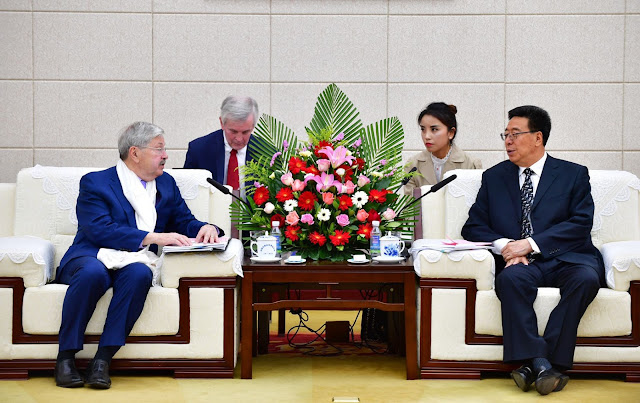 The meeting took place on May 22 afternoon.
The Chinese report says that Wu Yingjie first welcomed Branstad to the TAR; Wu noted that 2019 marks the 40th anniversary of the establishment of diplomatic relations between China and the United States: “Over the past 40 years, China-US relations and the two countries have made historic progress; this has brought great benefits to the two peoples, and made important contributions to world peace, stability, and prosperity,” he observed.
Of course, there was no question of the on-going trade war, started by President Trump.
Wu reminded his guest that in December last year, President Xi Jinping met with President Trump in Argentina and “reached important consensus”, which was an indication of the direction in which Sino-US relations were moving. Wu said that was hoped that “the two sides would work together …in the same direction.”
The Party boss added that in accordance with the principles and directions set by the two heads of state, “we will expand our cooperation on the basis of mutual benefit, manage differences on the basis of mutual respect, and jointly promote Sino-US relations based on coordination, cooperation and stability;” all this for the benefit the people of the two countries and the people of the world. 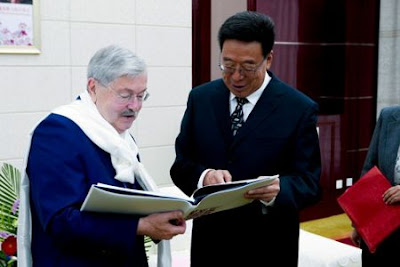 Then Wu Yingjie briefly introduced the “great achievements made by the TAR under the leadership of the Communist Party of China in safeguarding the freedom of religious belief, traditional culture and ecological environment protection, and people's livelihood, education, employment, and poverty alleviation.”
What is most surprising is that this report, in Communist jargon, appeared more than five days after the meeting took place …and it is completely different from the US account.
Wu concluded that he hoped that Ambassador Branstad’s visit would further deepen his own understanding of the TAR and that what he will see during his visit, would be an good introduction “to a prosperous and developing Tibet and its people from all walks of life.”
Wu sincerely welcomed “more American friends to come to Tibet for sightseeing, exchanges and cooperation.”

Branstad's Answer
According to the Communist mouthpiece, Terry Branstad expressed his gratitude for the warm welcome. He would have observed that the Region “has beautiful natural scenery and profound historical culture, and its economic and social development is very fast. The visit left a deep and beautiful impression.”
The report concluded by noting that the two sides “exchanged views on issues of common concern.”
That must have been the most interesting part of the discussion, but it will probably remain classified for many years.
Did Branstad ask about the fate of the Panchen Lama, kidnapped 20 years ago? Probably not!

It is difficult to say if the visit will be beneficial for the Tibetans, as for the Chinese, it was probably a gesture to cool down the tensions, in the midst of the trade war.
Beijing can’t fight the US on too many fronts at the same time.
One could wish that the Indian Ambassador to China would also visit Lhasa and recall his hosts about the century old relations between Tibet and India.

Postcript
After writing this post, the Foreign Ministry Spokesman Lu Kang came back on the visit,
he asserted: "We welcome Ambassador Branstad to visit Tibet and hope he will have a first-hand understanding of economic and social development, as well as significant changes in people's livelihood over the past 60 plus years since the peaceful liberation of Tibet."
He repeated the same argument: "We hope Ambassador Branstad will visit [visited] Tibet in an objective manner and draw [drew] his own conclusion with respect for facts and without prejudice."
He was also aksed about ambassadors of other countries: "Whether it is the US ambassador or other countries' diplomatic envoys to China, consulting with relevant parties is necessary before making visits to specific places in China," Lu answered in diplomatic jargon.
No harm for the Indian Ambassador 'applying'. 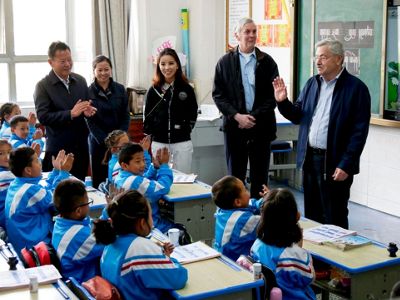 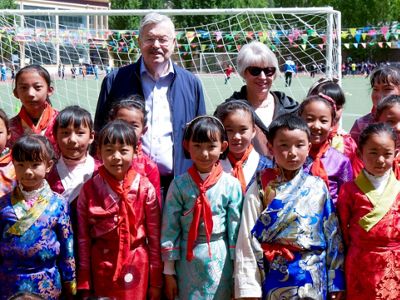 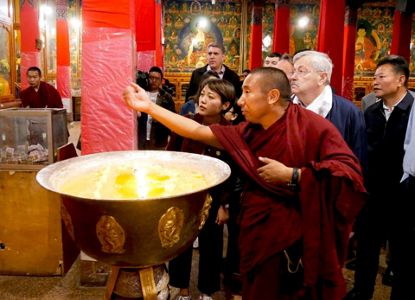 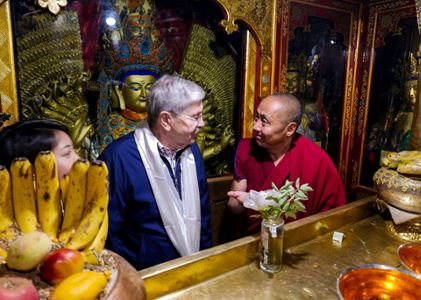 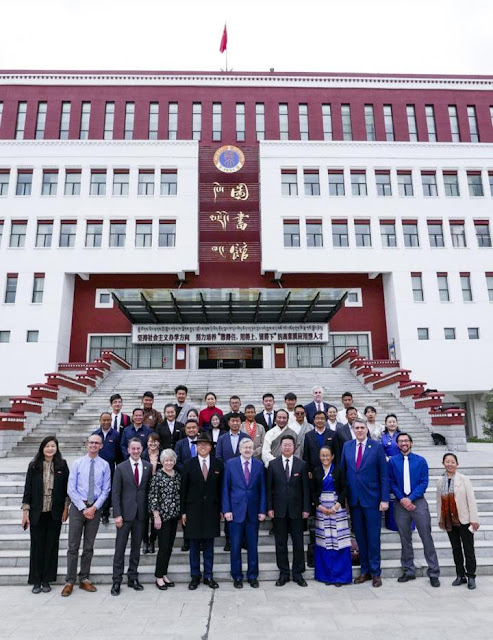