Why China cannot be considered a dependable global power 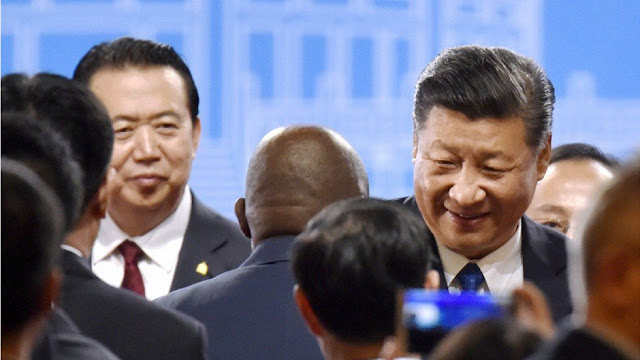 We are perhaps at a turning point in China’s relations with the rest of the world. During recent weeks, a series of events has showed that the "peaceful rise of China" may not be that smooth.
During the last National People’s Congress in March, the Chinese legislative included "Xi Jinping Thought on Socialism with Chinese Characteristics for a New Era" in the country’s constitution, but the sailing for the Great Helmsman of the "new era" will certainly not be the way President Xi Jinping expected it.

No global trust
Take the sudden disappearance of Meng Hongwei, the Interpol chief; the story is unheard of and it is bound to have serious implication for China’s growing role on the world scene. Meng is/was a high dignitary in the Chinese security apparatus; he served as deputy security minister before getting the plum international assignment in Lyon, France; this was till his wife Grace told the French police that she had not heard from her husband for several days. She was especially worried after receiving a text message from Meng’s phone with a knife emoji.
China’s National Supervisory Commission had no choice but to announce in the middle of the night that Meng was under investigation: “his insistence on doing things his own way means he only has himself to blame” said the Commission. It was also announced that he had resigned from his high-profile job.
What is the meaning of "insistence on doing things his own way"? Not listening to Xi? In the process, China’s credibility takes a huge beating as it will be difficult to sweep the story under the carpet for the sake of business.
This is happening at a time China celebrates the 40th anniversary of reform and opening-up, a reference to the transparent policies heralded by Deng Xiaoping. Meng’s arrest looks more like a Stalinist procedure than opening-up.
Can China today be considered a dependable global partner? Another example of China’s wrong ways of dealing with the rest of the world appeared in a Bloomberg article. After long in-depth investigations, the financial newspaper discovered: “The attack by Chinese spies reached almost 30 US companies, including Amazon and Apple, by compromising America’s technology supply chain.” The journalists reached this conclusion after extensive interviews with government and corporate sources.
Bloomberg affirmed: “Nested on the servers’ motherboards, the testers found a tiny microchip, not much bigger than a grain of rice, that wasn’t part of the boards’ original design. Amazon reported the discovery to US authorities, sending a shudder through the intelligence community.”
The microchips may have affected the Department of Defence’s data centres, the CIA’s drone operations, and others. Though the affected companies denied the facts, nobody took Bloomberg to court, knowing perfectly well that the journalists had done their homework in a professional manner: “During the ensuing top-secret probe, which remains open more than three years later, investigators determined that the chips allowed the attackers to create a stealth doorway into any network.” The chips had been inserted at factories run by manufacturing subcontractors in China.

US Criticism
China is today so obsessed to become the World Number One superpower that the party led by Xi does not hesitate to use unfair means to reach its objectives, but the international community is slowly opening its eyes.
Nothing may be the same for China anymore. The so-called Trade War, a small element of a larger design by the Trump administration (which includes a stronger presence in the South China Sea, triggering differences with the CCP, etc) was outlined by the US vice-president Mike Pence in a recent speech.
After saying that President Donald Trump “made our relationship with China and President Xi a priority,” he complained about China’s bad behaviour like never before: “We’re implementing tariffs on $250 billion in Chinese goods, with the highest tariffs specifically targeting the advanced industries that Beijing is trying to capture and control,” he said.
He added that the US is “building new and stronger bonds with nations that share our values across the region, from India to Samoa.” Targeting Beijing repeatedly, Pence asserted that Washington was working on “a just and transparent alternative to China’s debttrap diplomacy,” pointing a finger to Xi’s Road and Belt Initiative. The Vice-President also warned Google not to launch a censored search engine in China.
The distrust vis-a-vis China is fast spreading over the planet and Beijing’s new propagandist tool, the Voice of China, will find it increasingly difficult to defend Beijing’s views (like justifying a million Uyghurs sent to reeducation camps in Xinjiang).

Tightening grip
Two months back, Australia blocked Huawei and ZTE, two Chinese telecom giants, from providing equipment for its 5G network, though Huawei had given assurances that it would not pose a threat to Australian national interests. But who is believing China today?
The wave is spreading to Europe, too. A question remains: can China amend its ways? It is doubtful. A new regulation was recently issued by the Chinese Ministry of Public Security (Mengs’ parent ministry) authorising authorities to enter the premises of all entities that provide Internet services and look for information relevant to cybersecurity.
Beijing is every day tightening its grip on China’s already restricted cyberspace. Where is the opening-up of Deng Xiaoping?
It will certainly have consequences on China’s role on the world scene.
Posted by Claude Arpi at 7:36 AM