An excellent article ('Muddy Siang is sign of danger ahead, wake up call for Indian authorities') on the recent developments on the Yarlung Tsangpo/Siang/ Brahmaputra has been published by the South Asia Network on Dams, Rivers and People (SANDRP).
It is worth reading.
Two important questions have been raised.
Why China kept quiet if it was ‘only’ a earthquake and why India remained ‘unaware’ when it was not too difficult to ‘know’ the facts with remote satellite imagery.
SANDRP has answered the second question (or at least has questioned the role of the Indian officials).

But why has China kept silent?
According to the report quoted by SANDRP, a huge amount of debris has accumulated and blocked three locations, forming natural dams on the river across a 12-kilometre stretch in Tibet. It was cause by a 6.4 (or 6.9) earthquake in the Great Bend region. It darkened the waters of the Yarlung Tsangpo.
In November, Xinhua quoted the China Earthquake Networks Center (CENC) to report that no casualty had occurred “after a 6.9-magnitude earthquake hit Nyingchi, southwest China's Tibet Autonomous Region at 6:34 a.m. on November 18.”

The agency added that the quake caused "power failures and building damages in a number of villages in [around] the epicenter in Nyingchi City. "
The epicenter was located at 29.75 degrees north latitude and 95.02 degrees east longitude; it struck at a depth of about 10 km and several minor aftershocks were felt.
Xinhua quoted Pasang Tsering, Communist Party chief in Tashigang Village of Lunang Township, saying that he could not stand still in his house when the quake struck: “Six houses in his village had damages from the jolt.”
Incidentally, Lunang (or Lulang) is the newest town in Tibet: “It was built with a total investment of more than 3 billion yuan (436 million U.S. dollars). Here tourists can enjoy splendid natural scenery, various traditions and high-level infrastructure,” wrote Xinhua.
According to the Chinese press agency: “Lunang, meaning ‘Dragon King Valley’ in Tibetan, sits near the Sichuan-Tibet Highway. The small town is 3,300 meters above the sea level and is surrounded by Yarlung Tsangpo Grand Canyon, Mount Namjabarwa [Mt Namcha Barwa near the Great Bend] and many other scenic spots. It is known as the most beautiful town in Nyingchi.”
The state of the 'new' Town is unknown.

China finally speaks
Yesterday, Hua Chunying, the Chinese foreign ministry spokesperson, known for her sharp tongue during the Doklam incident, said that China “will maintain communication with India over the transboundary rivers in the wake of lakes and dams being formed on the Yarlung Tsangpo due to earthquakes in Tibet”.
Ms Hua stated: “According to verification by the relevant authorities, I can tell you that this lake is to the east section of the China-India boundary. It is caused by natural factors, it is not man-made."
She added: “I noticed that Indian professional authorities have made an analysis and clarification on this. We hope the Indian media will not make a groundless speculation on this and the Chinese side will, through the existing channels, maintain communication with the Indian side on the cross-border rivers.”
As mentioned earlier on this blog, following the Doklam incident in June, China did not respect its agreements with India to share the data of the Yarlung Tsangpo and the Sutlej.

More details are out
The China Seismological Bureau is said to have launch "a third-degree emergency response mechanism, holding a teleconference to monitor an investigation into the situation and sending experts to the quake-hit region."
Why was India not informed?
The Bureau noted that the highest seismic intensity of the quake affected an area of 500 square meters, which is sparsely populated.
According to the Bureau's findings, the tremors triggered falling rocks, blocking a highway linking Nyingchi's city proper with Tangmai, one of the quake-hit townships. Armed police were called to clear the road. 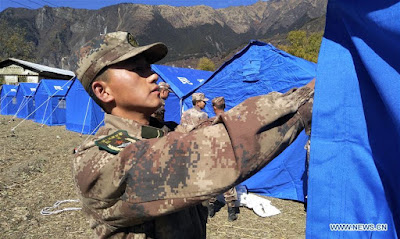 The Fire Department of the Ministry of Public Security stated that fire fighters from Nyingchi city were working in Tangmai Township: "Another team of rescuers will take helicopter to Gyalha village in the epicenter, after road to the village was blocked by rocks." The Ministry of Transport has also dispatched staff to investigate the safety condition of bridges in the quake-hit area.
The report added: "The Tibet subsidiaries of Chinese telecom providers China Mobile and China Tower said that their networks are operating normally. But the Tibet branch of China Telecom reported the disruption of an optical cable for broadband service in Pome and Zayul counties."
Why nothing was said on the three new lakes affecting the Siang/Brahmaputra?

A  second earthquake
The Chinese media later reported that a second earthquake took place on December 20, 2017. Pictures showing Bayi town of Nyingchi City appeared in the Chinese press.
Incidentally, Bayi (8-1 or August 1) is the HQ of the PLA in Southern Tibet; August 1 being the date-anniversary of the foundation of the PLA in 1929.
A caption said: “No casualties were reported as of 11 a.m., following two earthquakes in Tibet early Wednesday morning [December 20]. A magnitude 5 earthquake jolted Bayi District of Nyingchi City at 1:40 a.m., according to the China Earthquake Networks Center. At 4:08 a.m., a magnitude 3.2 earthquake hit the same region.”

The Three Warfares
China has kept quiet because post Doklam, Beijing started an information war with India.
This began by an article planted in The South China Morning Post.
On October 29, Jack Ma’s newspaper reported that “Chinese engineers are testing techniques that could be used to build a 1,000km tunnel – the world’s longest – to carry water from Tibet to Xinjiang. …The proposed tunnel, which would drop down from the world’s highest plateau in multiple sections connected by waterfalls, would ‘turn Xinjiang into California’, one geotechnical engineer said.”
The idea was to create hysteria in India, which is not difficult.
Three weeks later, the earthquake triggered a tsunami of alarmist ‘expert’ views in the Indian press.
China decided to remain silent. Ms Hua can now say “We hope the Indian media will not make a groundless speculation on this.” But who triggered the ‘groundless speculations’?
By the end of November, Beijing could have mentioned the earthquake as the source of the black colour of the Siang, but the Chinese leadership preferred to let the Indian media ...and politicians speculate.
Indian needs to be prepared for more Information Warfare. 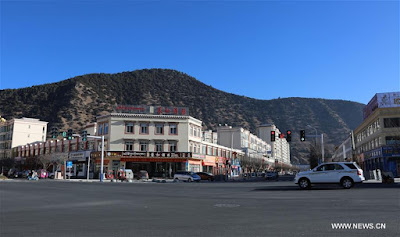