The Land of Mon 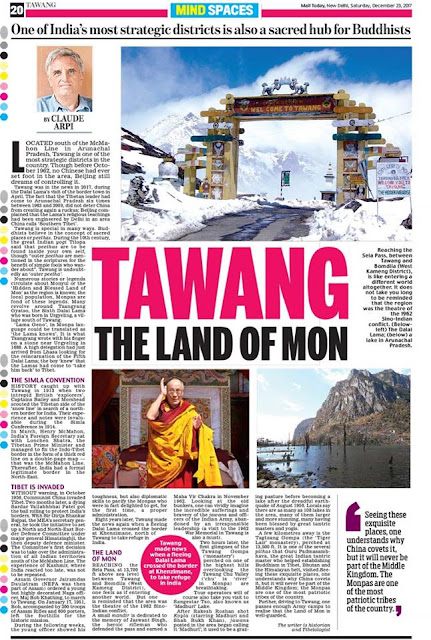 My article The Land of Mon appeared in the yearend magazine of Mail Today.

Yearend is always the best time to analyse the year that's on the verge of ending. Mail Today does the same with its 24-page special year-ender that maps 2017 through paces like Shopian, Kannur, Darjeeling, Somnath, Ayodhya, Doklam, Agra, Basirhat, Tawang and Sukma. As one of the Mail Today readers told me, it's a collector's copy and should not be missed. I have my own couple of favourites here. I am sure even you will find yours.

Tawang, the Land of Mon

Located south of the McMahon Line in Arunachal Pradesh, Tawang is one of the most strategic districts in the country. Though before October 1962, no Chinese had ever set foot in the area, Beijing still dreams of controlling it.
Tawang was in the news in 2017, during the Dalai Lama’s visit of the border town in April. The fact that the Tibetan leader had come to Arunachal Pradesh six times between 1983 and 2009, did not deter China from creating again a ruckus; Beijing complained that the Lama’s religious teachings had been engineered by Delhi in an area China calls ‘Southern Tibet’.
Tawang is special in many ways. Buddhists believe in the concept of sacred places or peethas. During the 10th century, the great Indian yogi Tilopa said that peethas are to be found inside your own self, though “outer peethas are mentioned in the scriptures for the benefit of simple fools who wander about”. Tawang is undoubtedly an ‘outer peetha’.
Numerous stories or legends circulate about Monyul or the ‘Hidden and Blessed Land of Mon’ as the region is known; the local population, Monpas are fond of these legends. Many revolve around Tsangyang Gyatso, the Sixth Dalai Lama who was born in Urgyeling, a village south of Tawang.
‘Lama Geno’, in Monpa language could be translated as ‘the Lama knows’. It is what Tsangyang wrote with his finger on a stone near Urgyeling in 1688. A high delegation had just arrived from Lhasa looking for the reincarnation of the Fifth Dalai Lama; the boy ‘knew’ that the Lamas had come to ‘take him back’ to Tibet.

The Simla Convention
History caught up with Tawang in 1913 when two intrepid British ‘explorers’, Captains Bailey and Morshead scouted the Tibetan side of the ‘snow line’ in search of a northern border for India. Their experience and notes were invaluable during the Simla Conference in 1914. In March, Henry McMahon, India’s Foreign Secretary sat with Lonchen Shatra, the Tibetan Prime Minister and managed to fix the Indo-Tibet border in the form of a thick red line on a double-page map — that was the McMahon Line. Thereafter, India had a formal legitimate border in the North-East.

Tibet is invaded
Without warning, in October 1950, Communist China invaded Tibet.
Two months later, a dying Sardar Vallabhbhai Patel got the ball rolling to protect India’s borders. With Sir Girija Shankar Bajpai, the MEA’s Secretary General, he took the initiative to set up a North and North-East Border Defence Committee under Maj Gen Himatsinghji, the then Deputy Defence Minister. The Committee’s first decision was to take over the administration of all Indian territories south of the McMahon Line. The experience of Kashmir, where India reacted too late, was not to be repeated.
Assam Governor Jairamdas Daulatram (NEFA was then part of Assam) ordered a young but highly decorated Naga officer, Maj Bob Khathing, to march to Tawang. On January 17, 1951, Bob, accompanied by 200 troops of Assam Rifles and 600 porters, left the foothills for the historic mission. During the following weeks, the young officer showed his toughness, but also diplomatic skills to pacify the Monpas who were in fact delighted to get, for the first time, a proper administration.
Eight years later, Tawang made the news again when a fleeing Dalai Lama crossed the border at Khenzimane, north of Tawang to take refuge in India.

The Land of Mon
Reaching the Sela Pass, at 13,700 feet above sea level between Tawang and Bomdila (West Kameng District), one feels as if entering another world. first But one is reminded that the area was the theater of the 1962 Sino-Indian conflict. A small mandir is dedicated to the memory of Jaswant Singh, the heroic rifleman who defended the pass and earned a Maha Vir Chakra in November 1962. Looking at the old bunkers, one can vividly imagine the incredible sufferings and bravery of the jawans and officers of the Indian Army, abandoned by an irresponsible leadership (a visit to the 1962 War Memorial in Tawang is also a must).
Two hours later, the first glimpses of the Tawang Gompa (‘monastery’) perched on one of the highest hills overlooking the Tawang Chu Valley (‘chu’ is ‘river’ in Monpa) are breathtaking.
For the past three centuries, life in Monyul has been centered around the Gompa, the fountainhead of the Buddha Dharma for some 30,000 Monpas and other Buddhist ethnic groups (like the Sherdukpens).
The history of the location of the Gompa is most interesting: a monk called Mera Lama, born in Kitpi village near Tawang, spent several years in Tibet before returning to his native place. Before leaving Lhasa, he met the Fifth Dalai Lama who asked him to propagate the Dharma in Monyul and establish a large monastery. The legend says it is Mera Lama's horse who found the location of the new monastery. It became known as Tawang Gompa: in Monpa dialect ‘ta’ means ‘horse’ and ‘wang’ ‘blessings’ (Tawang is ‘the place blessed by the horse’).
One may be called ‘simple fool’ by siddhas, but visiting these ‘outer’ empowered places, is tremendously enjoyable.
Tour operators will of course also take you visit to Sangestar Tso, also known as ‘Madhuri’ Lake. After Rakesh Roshan shot Koyla (starring Madhuri and Shah Rukh Khan), jawans posted in the area began calling it ‘Madhuri’; it used to be a grazing pasture before becoming a lake after the dreadful earthquake of August 1950. Locals say there are as many as 108 lakes in the area, many of them larger and more stunning, many having been blessed by great tantric masters and yogis.
A few kilometers away is the Tagtsang Gompa (the ‘Tiger Lair’ monastery), perched at 13,500 feet. It is one of the several pithas that Guru Padmasambhava, the great Indian tantric master who helped establishing Buddhism in Tibet, Bhutan and the Himalayan belt, visited.
Seeing these exquisite places, one understands why China covets it, but it will never be part of the Middle Kingdom; the Monpas are one of the most patriotic tribes of the country. Further, driving to Tawang, one passes enough Army camps to realize that the Land of Mon is well-guarded.
Posted by Claude Arpi at 5:55 AM