Ngaba (Chinese, Aba) Tibetan Autonomous Prefecture is one of the most ‘restive’ prefectures in Tibet.
RFA’s Tibetan Service recently reported that on the occasion of the Tibetan New Year (Losar), several monasteries placed photos of the Dalai Lama on thrones, while monks made offerings and recited prayers for their leaders’ long life.
The forthcoming 80th birth year of the exiled leader was openly celebrated during the Losar celebrations in several places in Tibetan-inhabited areas and this, despite the fact that the display of Dalai Lama’s photos was harshly punished in the past.
RFA mentions the monasteries of Se, Nyentse, and Sumdo of Ngaba Prefecture, where the Dalai Lama’s photos were displayed. It was also reported that some Tibetan national flags were carried along with flags for world peace and Buddhist flags, in Gomang monastery in the same county.
According to the US radio program, thousands of Tibetans took part in the festival, which is hosted each year, on a rotating basis, by one of six villages attached to the monastery. On March 4, the festival was held in Suwa village.
Again in Ngaba, a Tibetan woman, Norchuk, set herself ablaze in Trotsuk village. Norchuk's remains were cremated the next day by members of her village to prevent the Chinese authorities to take her body away, said RFA.
Norchuk, who is survived by her husband and one son and two daughters, became the 137th known case of self-immolation since 2009.
In another incident in the same area, a Tibetan monk was beaten and detained by police after he decided to launch a solo protest for Tibetan freedom and the return of the Dalai Lama. Gendun Phuntsok, 18, launched his protest around noon on March 8 on the main street of Ngaba town.
According to RFA, Phuntsok “shouted slogans calling for the Dalai Lama’s return. He also demanded freedom and equality for Tibetans, saying that Chinese policies in the region have caused intolerable suffering.” He was later taken into custody.
Before Losar, large numbers of Chinese security forces were deployed to Tibetan-populated areas of Sichuan, Gansu and Qinghai provinces to ‘deter anti-China protests’.

RFA said that “the measures included checkpoints examining vehicles on major roads and police equipped with fire extinguishers and  fire trucks standing by to respond to self-immolations.” 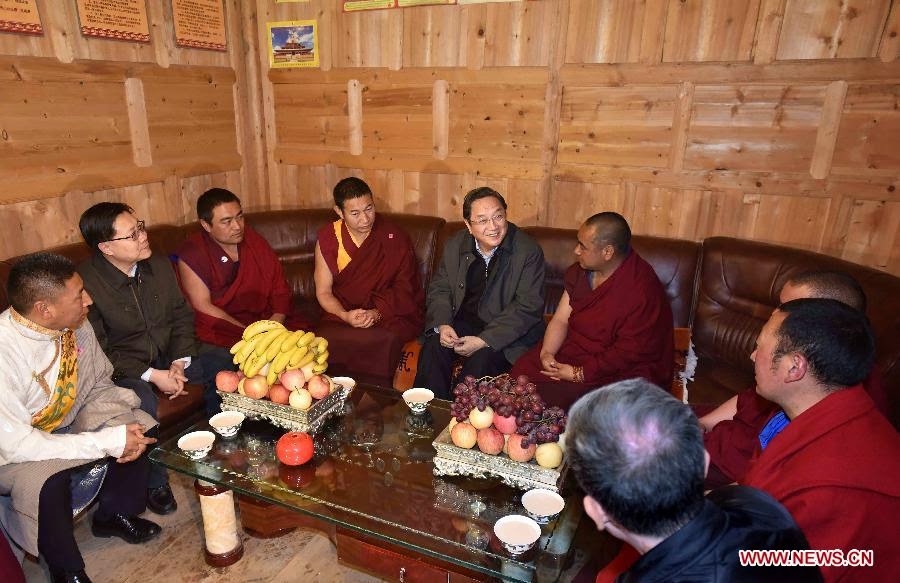 Yu Zhengsheng in Ngaba
In these circumstances it is surprising that Yu Zhengsheng, chairman of the Chinese People's Political Consultative Conference (CPPCC) and member of the Politburo’s Standing Committee visited Ngaba Prefecture between March 25 to 27.
According to Xinhua, Yu spoke of the ‘long-term prosperity, stability stressed for China's Tibetan regions’.
Xinhua reported: “Top Chinese political advisor Yu Zhengsheng has called for efforts to coordinate development and improvement of people's livelihood, promote religious and ethnic harmony to maintain long-term prosperity and stability in Tibetan regions.”
Yu spent three full days in the restive prefecture (from Wednesday and Friday).
He was accompanied by Wang Dongming, Sichuan’s Party Secretary, who earlier served as the Director of Office for Central Organization Committee of CPC Central Committee (from 2007 to 2012).
Xu would have declared: “The ultimate goal for accelerating the development of Tibetan regions is to improve people's livelihoods, and improving people's livelihoods should be a key criterion for evaluating the quality of development."
According to Xinhua, he promised more funds and projects favoring the grassroots, rural and pastoral populations.
According to official information, Yu inspected “schools, hospitals, monasteries and held symposiums with local officials.”
Yu, who is also the Chairman of Central Working Coordination Small Group on Tibet stressed the importance of having the education in both Mandarin Chinese and local ethnic languages (i.e. Tibetan).
Yu noted that the teaching of science and engineering should be strengthened to boost the ability of students of ethnic minorities: “Great efforts should be made to develop local medical services and cultivate high-level health workers in the Tibetan regions." 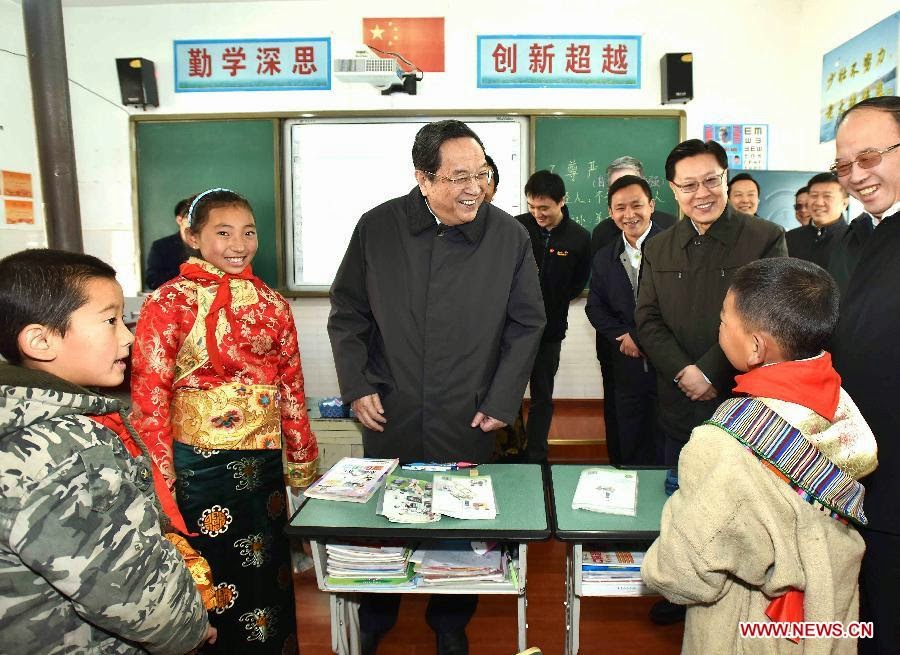 Does this visit mark a change in policy for the Tibetan-inhabited areas (i.e. former Kham and Amdo provinces)?
It is too early to answer this question, however Yu also mentioned that “local religious work should be conducted in line with the principle of rule of law, and religious figures should actively guide Tibetan Buddhism to adapt to a socialist society, while resolutely resisting the influence from foreign forces.”
What about the Dalai Lama? He is considered as a 'foreign force'?
Regarding the Rule of Law, it stipulates that it is the Party which chose the ‘incarnations’ of deceased Lamas.
If Beijing decides to follow the rule of the Party’s Law, this may create further tensions with the local population, particularly if the Party interferes in the ‘local’ belief system (reincarnation of Lamas). 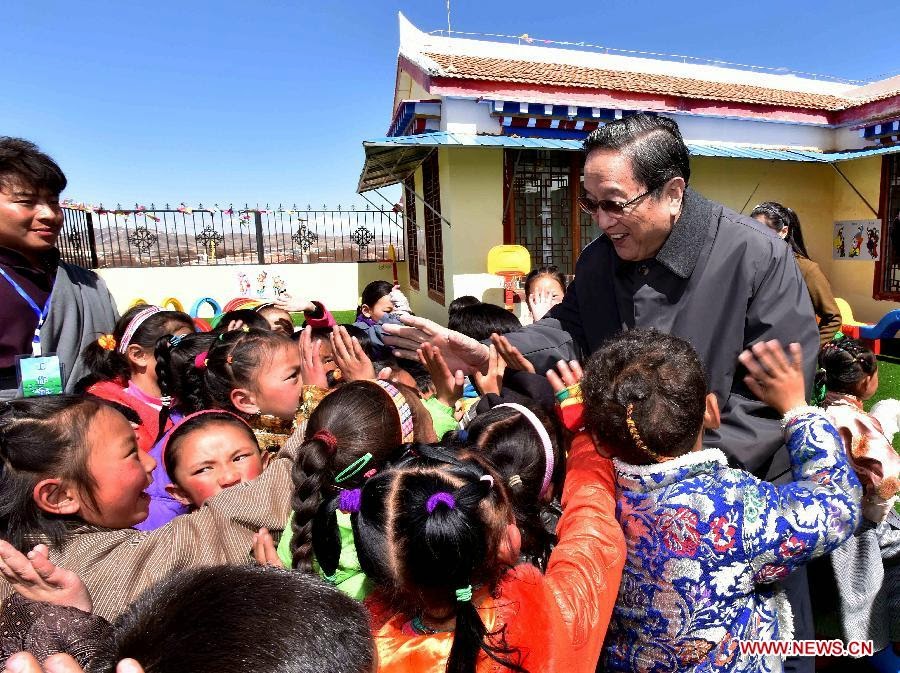 Xinhua asserted that Yu praised social and economic achievements of Ngaba and urged the region to map out an employment-oriented development plan that combined infrastructure and environmental protection.
Official authorization to have photos of the Dalai Lama would probably be a first concrete sign that Beijing is interested to cool down the volatile situation in the Prefecture and elsewhere in Eastern Tibet.
Economic development and infrastructure have never been the main concern of the Khampa population.
Has Mr. Yu been told this during his 3-day visit?
Let us hope so.
As always, the visit was announced once the leader was back between the protected and safe walls of Zhongnanhai in Beijing.
It is perhaps safer for 'Central' leaders.
Posted by Claude Arpi at 10:48 AM