White Paper on China No VIII 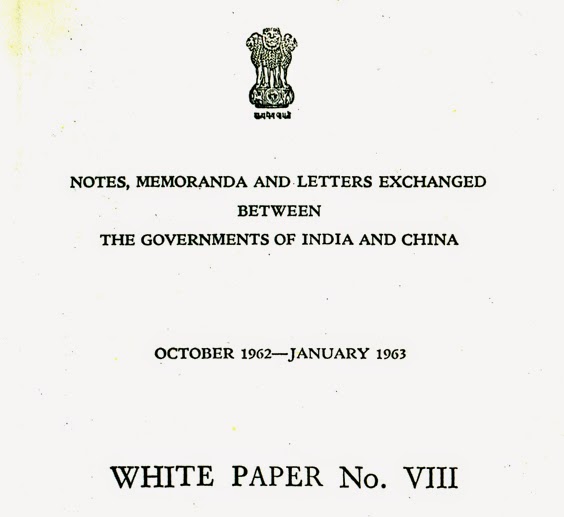 I have posted on my website, a digital version of the White Paper No.VIII on China (also known as Notes, Memoranda and Letters Exchanged Between the Governments of India and China).
This volume relates to the period between October 1962 and January 1963, the months following the India-China War.
This White Paper, which was presented in the Parliament by the Prime Minister on January 20, 1963, contains the notes, memoranda and letters exchanged between the two Governments since 24 October 1962.
It also contains a few notes which had not been included in the previous White Paper.
The note below was presented by the Embassy of China in India to the Ministry of External Affairs in New Delhi on November 13, 1962.
It is one of the hundreds of documents published in this White Paper on China...
Enjoy!

You can download the White Paper by clicking here...

The Embassy of the People's Republic of China in India presents its compliments to the Ministry of External Affairs of the Republic of India and has the honour to state as follows:
On the afternoon of November 3, 1962 a few hundred Indian ruffians carrying with them loud-speakers arrived successively at the gate of the Embassy from 4.50. They shouted slogan insulting Chairman Mao Tse-tung and kept on clamouring as long as one and a half hours.
At about 11.45 A.M. on November 7 and 3.15 P.M. on November 10 respectively more than one hundred people shouted in front of the Embassy slogans insulting the Chinese people and their leaders and burnt an effigy of Premier Chou En-lai.
At about 7.15 P.M. on November 9, about 150 people carrying torches and Congress flags shouted and made disturbances before the Embassy's gate. Again, on November 11, about 200 ruffians carrying Congress flags came to the Embassy at about 11.50 A.M. burnt an effigy of Premier Chou En-lai and shouted insulting slogans like 'Death to Mao and Chou'.
In Calcutta about 200 ruffians made clamours before the Chinese Consulate-General at 5.50 p.m. on November 3 and slandered the Chinese people as 'bandits'. On the afternoon of November 4, two batches of ruffians made troubles and burnt portraits of Chinese leaders before the Consulate-General. On the afternoon of November 6, about 300 and on the afternoon of November 9 about 80 ruffians were clamouring before the Consulate-General. Before the Chinese Consulate-General in Bombay similar incident occurred on the afternoon of November 2.
It must be pointed out that after the Chinese Embassy lodged a protest with the Indian Government on November 3, 1962 against incidents of Indian ruffians making clamours and disturbances in front of the Chinese Embassy and Consulates-General, those ruffians should have still been allowed to continue to make trouble and provocations, and insult the Chinese people and their leaders. That the Indian authorities do not stop the outrages by the ruffians shows that the Indian Government is conniving at them to fan up anti-Chinese sentiments. For this the Indian Government can in no way evade its due responsibility. The Chinese Embassy hereby lodges a strong protest with the Indian Government and demands that the Indian Government immediately take effective measures to prevent recurrence of the above-said acts of slandering the People's Republic of China and her leaders, obstructing the normal functioning and threatening the security of the Chinese Embassy and Consulates-General.
The Embassy of the People's Republic of China takes this opportunity to renew to the Ministry the assurances of its highest consideration.

The Indian answer is available in the downloadable pdf version.
Posted by Claude Arpi at 6:51 AM