The Return of Du Qinglin in Tibetan affairs

In September 2012, the appointment of Ling Jihua as the boss of the CCP's United Front Work Department was reported by the Chinese press.
Ling then replaced Du Qinglin.
My reading of this move was that after retirement, President Hu Jintao wanted to keep his fingers in the Tibetan pie through his protégé, Ling.
The interesting part of it is that though Ling replaced Du Qinglin, the latter now seats in his place in the Secretariat of the Communist Party of China (CPC) Central Committee.
That is a hot seat.
Who is Du Qinglin?
Born in November 1946 in Jilin Province, Du joined the CPC in March 1966. He graduated from the School of Economics and Management at Jilin University with a major in national economic planning and management. He received a postgraduate education while in service and was awarded the degree of Master of Economics.
Apart from his important job in the Secretariat of the CPC Central Committee, Du is also vice chairman of the 12th CPPCC National Committee.
Du is a truly important man in the Party.
Du recently visited the Tibetan-inhabited areas of Sichuan and Yunnan.
What was the purpose to the visit?
Probably, the Standing Committee of the Politburo wanted his views on the prevailing situation in these regions.
According to Xinhua: "Du urged them to serve local people with emotion and responsibility. He called for the cultivation of a number of capable and passionate cadres to enhance the Party's public support."
He may not be able to find many 'passionate' cadres to impose more repression around, but this another issue.
Du would have said: "Unity and democracy are the two great themes of the CPPCC. The CPPCC is a patriotic united front organization of the Chinese people, serving as a key mechanism for multi-party cooperation and political consultation under the leadership of the Communist Party of China (CPC), and a major symbol of socialist democracy."
It is still not clear to me what 'socialist democracy' is. 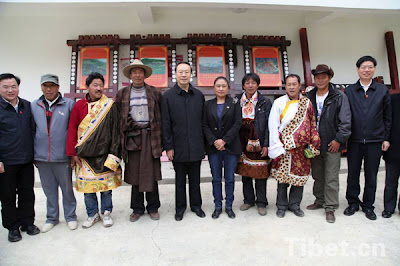 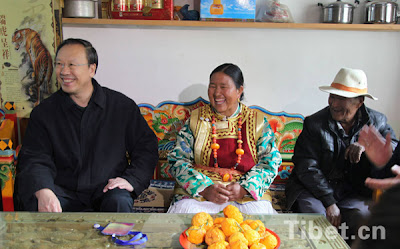 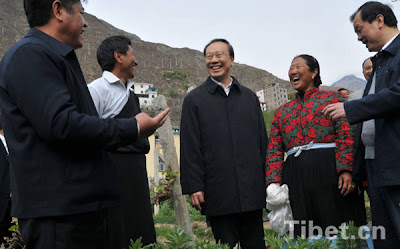 Official stresses Party-people ties in Tibetan-inhabited area
English.news.cn
April 1, 2013
BEIJING, April 1 (Xinhua) -- Senior political advisor Du Qinglin has stressed forging closer Party-people ties and hardening local residents' common understanding of safeguarding ethnic solidarity and national unity in Tibetan-inhabited regions.
Du made the remarks during an inspection tour to the Tibetan autonomous prefectures of Ganzi and Diqing, in southwest China's Sichuan and Yunnan provinces respectively, between March 29 and April 1.
According to an official statement Xinhua obtained Monday, Du visited farmers' households, schools and monasteries where he held face-to-face talks with Party cadres, farmers and herdsmen, and people from religious circles.
Du, vice chairman of the National Committee of the Chinese People's Political Consultative Conference and a member of the secretariat of the Communist Party of China (CPC) Central Committee, called for greater efforts to consolidate the foundation of CPC-people ties.
He encouraged authorities to explore ways for local economic and social development that match local conditions, with an aim to increase people's income and make them become better off.
"Greater strength should be exerted to solve the problems of healthcare, education and employment, which are among the people's top concerns," he said, stressing that efforts to win people's support and to improve their well-being should be combined.
Extending greetings to grassroots-level cadres and CPC members, Du urged them to serve local people with emotion and responsibility. He called for the cultivation of a number of capable and passionate cadres to enhance the Party's public support.
He also urged efforts to step up administration of religious affairs in accordance with the law, and bring the positive role of religious personages and believers in facilitating economic and social development into play.