Nepal is the new Chinese colony 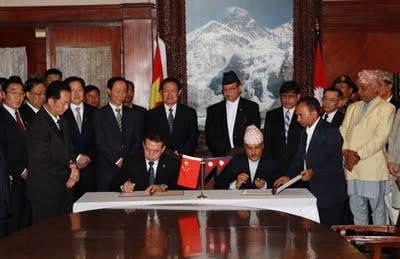 My article Nepal is the new Chinese colony appeared in niticentral.com.

Nepal is the new Chinese colony
Niti Central.com
April 20, 2013
The Chinese are slowly invading Nepal. Last month, AFP reported that ‘China eyes India trade by boosting spending in Nepal’. The news agency stated that China’s ambassador to Kathmandu was recently seen in a traditional Nepali cap and silk scarf, digging with a spade to symbolise the laying of the foundations of a new land port on the Tibet border.
China had just completed a 22-kilometre road connecting central Nepal with Kyirong district in Tibet. The new road is said to be the shortest motorable overland route between China and India.
Purna Basnet, a Nepalese political commentator told AFP that this will help China to export to India: “It will be easier for China to supply goods to India via Nepal. There is even talk of connecting Kathmandu with the rail network in Tibet. The Shigatse-Lhasa railway will be completed in a couple of years. From Shigatse, they have plans to connect Kathmandu through railways.”
In an op-ed article in The Republica in January 2013, Chinese ambassador Yang Houlan had propounded the same theory — Kathmandu could be a trade gateway to New Delhi: “From an economic viewpoint, Nepal links China (with 1.3 billion people) with South Asia (with 1.5 billion). The huge common market provides great opportunities for both China and South Asia.”
This argument however does not make sense. If India was so keen to trade with Tibet (and vice-versa), why is the trade through Nathu-la pass between Sikkim and Tibet faring so poorly?
A more plausible theory is that China’s investment in Nepal is part of a vital factor for controlling unrest in Tibet. Lekhnath Paudel, a Kathmandu-based strategic affairs analyst told AFP: “In Tibet, unrest has significantly increased, so Chinese investment in Nepal should be understood in the context of China’s integrity, which is very important for the giant nation.”
One still remembers that in the 1960’s the CIA-supported guerillas, based in Mustang in northern Nepal, valiantly fought against Communist China. The camps were closed in the early 1970’s when Kissinger decided to befriend China and take his boss, President Nixon to Beijing.
Recently, The New York Times affirmed: “These days, it is the Chinese who are showing up in this far tip of the Buddhist kingdom (Mustang)… Chinese officials are seeking to stem the flow of disaffected Tibetans fleeing to Nepal and to enlist the help of the Nepalese authorities in cracking down on the political activities of the 20,000 Tibetans already here.”
Beijing regularly sends military officials across the Tibetan border to ‘train’ the local Nepalese in ‘border security’.
The New York Times reported: “Their efforts across the country have borne fruit. The Nepalese police regularly detain Tibetans during anti-China protests in Katmandu, and they have even curbed celebrations of the birthday of the Dalai Lama”.
During the first eight months of 2012, the number of Tibetan refugees crossing from Tibet into Nepal was about 400, half as many as during the same period in 2011.
In August 2011, an unnoticed development took place in Nepal. Zhang Qingli, the then hardliner Party boss in Tibetm accompanied the Politburo Standing Committee member Zhou Yongkang to Nepal. Zhou was the tough security czar of the Middle Kingdom at the time.
With a 60-member delegation, Zhou raised Beijing’s concern about Tibetans in Nepal and their supposed support for the Tibet autonomy movement. Strangely, an unexpected event poured some cold water over Zhou Yongkang’s visit: the Nepalese PM Jhala Nath Khanal suddenly resigned. During his stay, Zhou however stated, “China would like to see stability in Nepal.”
Though it was widely projected as the main agenda of the visit, Zhou did not mention a word regarding Tibet during the hour-long meeting with Khanal.
Zhou however implied that Nepal needed to improve its weak security arrangements along Nepal-China border; he said China wished to help Nepal in doing so.
Already in July 2010, a meeting termed ‘Nepal-China Border Security and Law Enforcement Talks’ was held in Kathmandu. Both sides had agreed to set up ‘focal points’ in the respective Home Ministries in Kathmandu and Beijing. A senior Nepali Government official told The Kathmandu Post: “The Chinese side assured full support to enhance capacity building, training of Nepali security personnel to be deployed across the northern border, seeking Nepal’s full commitment on information sharing on anti-China activities with effective law enforcement mechanism to contain the activities.”
A few months after Zhou Yongkang’s visit to the erstwhile Kingdom, Chen Zhimin, the Chinese Vice-Minister of Public Security led a delegation to Nepal. According to the official communique issued after the visit: “The two sides exchanged views on cooperation of police affairs and law enforcement and reached consensus on some issues.”
The Nepali Press reported: “The Chinese offered ‘logistic support’ worth $300,000 dollars in the form of laptops, searchlights or metal detectors.”
Chen Zhimin was very pleased with outcome of his stay in Nepal: “My visit is to find out ways to strengthen the bilateral relations between Nepal and China.”
It is in this context that one should look at President Xi Jinping’s meeting with Puspa Kamal Dahal Prachanda in Beijing this week. Xi told his visitor: “The China-Nepal friendship is not only in the fundamental interests of the two countries and peoples, but also conducive to stability and development in the region”.
All these ‘achievements’ have been bad news for the Tibetan refugees, but also for India. Nepal has become a Chinese colony.
Posted by Claude Arpi at 5:33 AM