Why Xi Jinping did not visit Tibet? 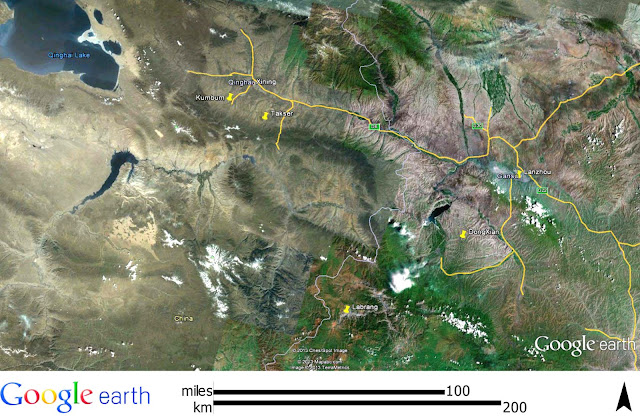 This map shows Gansu province.
According to The China Daily, Xi Jinping, CCP's General Secretary and Chairman of the Central Military Commission paid a visit ('an inspection tour') to Gansu from February 2 to 5.
The Chinese paper says: "During his visit, Xi also extended Spring Festival greetings to all Chinese people as the Spring Festival, or the Chinese Lunar New Year, approaches."
But what about the Tibetans?
The monastery of Labrang Tashi Kyil, where several self-immolations were reported is located some 100 km from Dongxian Autonomous County, where Xi spent some time with another minorities', the Hui Muslims.
The Chinese article affirms: "[Xi's] remarks reflected the new leadership's determination to boost the image and working style of the Party and the government."
Why did he choose not to address the Tibetan issue, while he was so close?
Some guesses: one, the Tibetan self-immolations and the situation on the Roof of the World is not Xi's priority. His first priority seems to fight against corruption in the Party.
Second guess: Xi may not be 'settled' enough in his new chair to tackle such a tricky question as Tibet.
The leadership change will only be completed next month and Xi is perhaps unwilling to put his fingers in the Tibetan problem too early.
Another possibility is that Xi prefers (or is forced) to let Yu Zhengsheng, his colleague in the Standing Committee of the Politburo to handle the Tibetan affairs. Read my earlier posting on the subject.
One has to wait and see what will happen after the Two Meetings.
But he was so close! 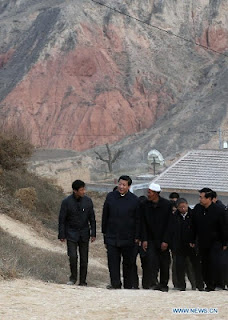 China Daily
Xi Jinping, general secretary of the Central Committee of the Communist Party of China (CPC) and also chairman of the CPC Central Military Commission, visits a major water diversion project in the Weiyuan County of Dingxi City, northwest China's Gansu Province, Feb. 3, 2013. Xi Jinping visited villages, enterprises and urban communities, chatting with impoverished villagers and asking about their livelihood during an inspection tour to Gansu from Feb. 2 to 5. During his visit, Xi also extended Spring Festival greetings to all Chinese people as the Spring Festival, or the Chinese Lunar New Year, approaches.
A down-to-earth attitude, a good work ethic and an ability to stay away from empty gestures are some of the key characteristics officials require for promotion, top leader Xi Jinping said during a visit to Gansu province.
Officials who are out for pleasure and love formality must be told their behavior is unacceptable and reprimanded, he said.
Party chief Xi urged officials to spend more time with the public to address their problems and concerns, and work harder to develop poverty-stricken regions. 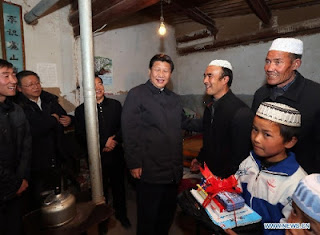 His remarks reflected the new leadership's determination to boost the image and working style of the Party and the government.
A good work ethic and personal integrity should be the key criteria in selecting, evaluating and promoting officials, Xi said during his four-day visit to the province, which started on Saturday.
The comments came against a backdrop of a number of recent scandals that have involved officials suspected of abusing their power or embezzling taxpayers' money.
Several officials across the country have been placed under investigation following allegations they owned property worth far more than they could afford on their official salaries. 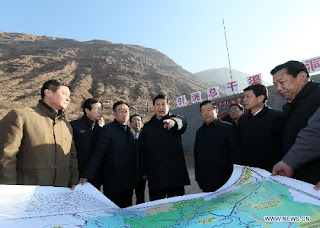 Another case involved 10 officials in Chong-qing who have been removed from their posts after a whistleblower revealed a sex scandal.
"China has entered a crucial period that means the government and local authorities have to narrow the gap between developed and underdeveloped regions," Wu Hui, a deputy professor of Party building at the Party School of the CPC Central Committee, said on Tuesday.
"This task demands officials at all levels have a good work ethic and maintain close ties with the general public.
"To achieve the goal of building a prosperous society, the government must make sure that residents in the remote, impoverished areas can enjoy a rapid increase in their income in the coming years, and the key lies in the work of local officials," Wu said. "That is why Xi emphasized work ethics and integrity in Gansu."
Bordering the Qinghai-Tibet Plateau, the Inner Mongolia Plateau and the Loess Plateau, Gansu is one of China's poorest provinces. The annual net per capita income of local farmers in 2012 stood at 4,507 yuan ($723).
"The fundamental problem behind incompetent officials is that there are loopholes in the selection and promotion mechanism," Wu said.
If there are those who think they can bribe their way up, then the public will lose confidence in the Party and the government, Wu added. 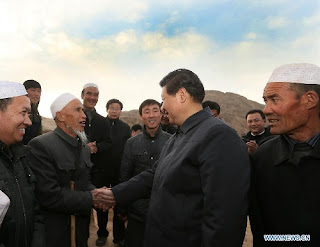 "Officials at the grassroots level must use wisdom to improve the standard of living of their communities and strengthen links with the people."
During his visit, Xi met with villagers and migrant workers and asked about their lives.
On Monday, Xi visited Xihu community in Lanzhou.
The community has created a mechanism that collects public opinion and suggestions, deals with problems people are most concerned with and releases the results to the public.
Xi praised them for establishing such a platform.
On Sunday afternoon, Xi went to a reconstruction site in  autonomous county, where a landslide triggered subsidence in March 2011.
Chatting with migrant workers, he said a prosperous society could not be realized without the contribution of migrant workers
Posted by Claude Arpi at 5:53 AM