Is Zhu Weiqun back in action? 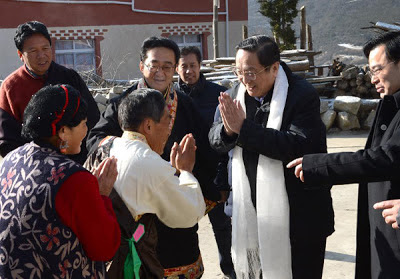 It appears that Yu Zhengsheng is settling in his new job, even before been officially anointed: he will be responsible of the United Works Department in the Standing Committee of the Politburo.
This article of The South China Morning Post says that Yu will certainly becomes the Chairman of the Leading Group for Taiwan affairs, which means that he will also chair the Tibet Work Coordination Small Group as both issues are under the same umbrella.
Interestingly, when he visited Tibetan areas in Sichuan, Yu was accompanied by Zhu Weiqun, the former Executive Vice Minister of the United Front Work Department. Does it mean that Zhu is teaching Yu the intricacies of United Front policies and politics.
Two years ago, I published an interview of Zhu Weiqun on this blog.
Zhu explained: "The peaceful liberation of Tibet is a milestone in the national liberation undertaking of the Chinese people under the leadership of the Chinese Communist Party as well as in the entire Chinese nation's century-long struggle for national unity".
A year ago (on February 19), I mentioned an article written by Zhu Weiqun, in The Study Times (Xuexi Shibao) which has hardly been noticed by the Indian press, though it has serious implications for India. Zhu, then interlocutor of the Dalai Lama's Envoys in the Beijing-Dharamsala negotiations, argued that China must change some aspects of its present political and educational system in order to achieve 'national cohesion'.
He wanted a discussion on this issue to take place at the last National People's Congress and Chinese People's Political Consultative Conference annual meetings in March 2012. The discussion was apparently not held and Zhu in the meantime lost his United Front job.
He seems to be back in action.

Taiwan media speculate on Beijing's picks for cross-strait relations
The South China Morning Post
CROSS-STRAIT RELATIONS
Lawrence Chung in Taipei
Taiwanese media buzzing over the key officials likely to represent Beijing in Taipei affairs
With the mainland's cabinet reshuffle taking place next month, Taiwanese media have begun speculating on who Beijing will appoint as its top officials responsible for cross-strait affairs.
Speculation is rife that Yu Zhengsheng, a member of the all-powerful Politburo Standing Committee, and Commerce Minister Chen Deming are two officials being considered for cross-strait posts.
Taiwanese media carried reports yesterday that Yu spoke at the Communist Party's 2013 annual work session on Taiwan affairs, held in Beijing on Tuesday, suggesting that he might be named deputy head of the party's leading group for Taiwan affairs. The group is generally headed by the party secretary.
Jia Qinglin , chairman of the National Committee of the Chinese People's Political Consultative Conference, is the current deputy head of the group, with outgoing president Hu Jintao being the leader.
Both had stepped down from the Politburo Standing Committee in November's party congress and will retire at next month's annual meetings of the National People's Congress and the CPPCC. Meanwhile, Yu is the only Politburo Standing Committee member in the upcoming CPPCC session, suggesting he would almost certainly head the CPPCC.
On Tuesday, Yu stressed the mainland would strive to increase mutual political trust across the strait, expand exchanges at grass-roots levels and speed up cross-strait co-operation in the industrial and financial sectors.
Taiwanese media focused on Yu's call for academic circles on both sides to begin dialogue on resolving cross-strait political issues. He also said that peaceful relations was the only path to peaceful unification.
Taiwanese media have also speculated on the possibility that Chen could be named head of the Beijing-based Association for Relations Across the Taiwan Strait (Arats), which was formed in the 1990s to represent Beijing in dealing with Taiwan, in the absence of formal ties.
The Taipei-based United Daily News reported that Chen, who failed to be elected as a member of the party's Central Committee, was likely to replace the current head of Arats, Chen Yunlin , who will reportedly retire soon.
If Chen Deming joined Arats, the newspaper said, Beijing's cross-strait work policy would likely become even more resourceful, given his rich experience in international trade talks.
Posted by Claude Arpi at 8:07 AM