Article 370 is a very misconceived Article 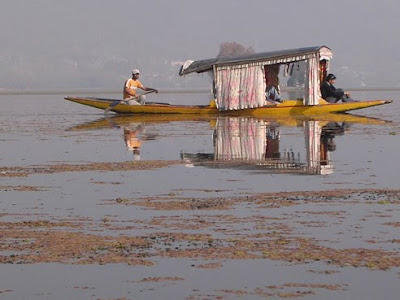 My interview with Mr. Jagmohan, former Governor of Jammu and Kashmir and Union Minister is posted in The Indian Defense Review website. It was recorded in 2007.

Claude: Sir, there are rumors that India and Pakistan will soon have a ‘deal’ on Kashmir. As someone who has been twice governor, in 1982 and in 1989 and this in the most difficult conditions, could you tell us how do you see the situation today? Is there any chance of a breakthrough in the peace process?

Jagmohan: The basic point is: whatever arrangements will be made, these arrangements will not work if the fundamentalist forces remain in power and if they dictate the law by the virtue of the gun. Take for example the suggestion [from President Musharraf] that they should be a joint-rule, joint management [of parts of the J & K State]. All this sounds very big, but it does not mean anything. If you and I are controlling the same place and if we differ, who is going to decide, who will have the final word? Even elementary things like that are not clear in Musharraf’s proposal.
And what does it means ‘self-rule’. If it means a ‘democratic rule’, it is already existing in our part of Kashmir; elections are regularly held and elected leaders form the government. What other ‘self-rule’ do you want? ‘Self-rule’ does not mean that Kashmir can become independent.
The poorest State in India is Bihar, but today Kashmir gets 11 times more Central assistance than Bihar.
And if Kashmir becomes independent, who is going to provide the money which is needed to run the government. Take the example of the Plan Expenditure [money allocated for development in the Five- Year Plan], today it is 100% financed by the Central Government.
Between 40 to 45% of the Non Plan Expenditure [allocations outside the Plan to run the day to day expenses] are met by the Central Government. In case of ‘self-rule’, nobody has made clear who will pay the bill.

Claude: Kashmir is today the most subsidized State in India!

Jagmohan: The poorest State in India is Bihar, but today Kashmir gets 11 times more Central assistance than Bihar. If ‘self-rule’ means self-sufficiency, all this support from the Central government will stop. But the problem is that nobody, none of the Kashmiris leaders will tell you this. If you ask them, they will say, “the finances will come”, but they will remain vague. That is for development.
Then Non Plan Expenditure, the day to day expenses like the salaries [of the government employees]. If tomorrow Kashmir is ‘de-linked’ from India except for External Affairs, Communications and Defence, the finances will not be provided anymore.
The next question is “who will pay?”
Will the Americans do it? Nobody is able to answer these questions. Some say, India should continue to finance ‘self-ruled’ Kashmir, but if tomorrow the ‘self-ruled’ government declare themselves independent or an Islamic State, will India, a secular State continue to finance a theocratic State?
There are so many contradictions in these proposals; it is what people do not understand. There are so many loopholes.
So far is Pakistan concerned, it is not even a democracy [and they are speaking of ‘self-rule’].

Claude: Does ‘self-rule’ applies also to Baltistan, Gilgit and other parts of Kashmir occupied by Pakistan?

Jagmohan: [Musharraf] has not clarified this. Today, [these areas] are virtually a colony of Pakistan. In POK, the President of Pakistan is the Chairman of the Security Council, of the Development Council and of the Kashmir Council. The Minister for Kashmir Affairs in Islamabad is the Vice-Chairman of these Councils. It means that all decisions are taken by Islamabad. It is not like here in India where the elected Chief Minister can take its own decision, there is not such thing in PoK. [The problem is that] nobody has gone into the nitty-gritty of these proposals.… it generates the feeling among Kashmiris that they are different. They believed: “We are different”. This has created a separate psyche in Kashmir.

Claude: Would this means ‘self-rule’ for Ladakh and Jammu?

Jagmohan: On the Indian side, we have given an autonomous Council to Ladakh because of his special character. It means that for certain subjects, whatever Ladakh decides, it is final. You can not [constitutionally] go beyond this, but because of these arrangements, Ladakh is prosperous.
Their only grievance is that they want to get rid of the Kashmir State. They want the status of Union Territory whereby they will directly be linked with the Central Government. It is also a problem, because Ladakh has two districts, Leh which is Buddhist dominated and Kargil which is Shia dominated.
The only solution for all these areas of the Valley, Jammu, Ladakh is that we have to learn to live together and to learn to work for the social and economic development of the State. We should not waste our energies in ethnic issues. If you look at ethnicity in the Jammu & Kashmir State, you will find so many ethnic groups. For example the shepherds in hilly areas can ask for a separate State, the people living in the mountains close to Himachal Pradesh speak Pahari, a different language and they are racially different, they can ask for a separate State, same thing with the Jammu people, or Pooch or Rajauri area. Even on the Pakistan side, you have the Mirpuri or people from Gigilt. It is just like Yugoslavia, the separation has only created havoc and bloodshed.
[In Jammu & Kashmir], many small dictators will claim to the leadership of their own area and the economical development will suffer, the State will suffer, everybody will suffer. I am against this; people should learn to live together with their own differences. So far the State is concern, one should provide good governance, give justice to people, offer economic development.
When I was in Kashmir the first time, I did a lot of developmental work and people forgot about article 370 and other [political] issues. There was justice, the roads were built, everything was done and people were happy; their attention was diverted from the narrow issues.

Claude: I noticed recently in Jammu that Indian firms can not invest in Jammu & Kashmir because of the Article 370. How to develop in these conditions?

Jagmohan: Article 370 is a very misconceived Article.
First, it generates the feeling among Kashmiris that they are different [from the rest of India]. They believed: “We are different”. This has created a separate psyche in Kashmir.
Then it benefits people who want the power like the Abdullah family; they have exploited this Article, not allowing outside people to come to the State. They have thus created their own sheikhdom.
I will tell you a story. When I was for the first time Governor in Kashmir, one day a fire erupted in an area of Srinagar. I went to inspect the place, it was stinking, there was no sewage at all. After some time, I sold in the same area a plot for a cinema which brought 60 millions rupees to the State. I had opened the tender to outside parties from Delhi and Mumbai. Normally under Article 370, it should have been restricted to local people, but we would have not got more than 4 millions. A friend of a politician would have bought it and eventually this ‘friend’ would have entered into a lease agreement with the Mumbai businessman and will have pocketed the difference. The middle man would have got the benefit, not the State.
The local leaders started an agitation against me, because I was not respecting Article 370. They came in a delegation, it included the people from the area were the fire had erupted (and where there was no sewage). They told me that it is an infringement of Article 370. I told them: “Do you understand what it means for you Article 370?” They spoke of their self-identity. I told them: “I went to your colony and it was stinking, yourself told me that you were living in hell, now with this 60 millions I will provide you with proper sanitation. Do you want sanitation or Article 370?” They immediately understood.
It is vested interest who keeps this article 370 and do not allow outside investment to come. This article does not help anyone, it hampers economic development. It only helps politicians and narrow-minded people who work only for their selfish interest.

This interview was taken in 2007, but is equally relevant even today — Editor.
Posted by Claude Arpi at 9:33 PM