She spent her 64th birthday in jail. 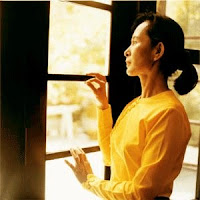 Where is India in this picture?
In 2007, India lost to China a 30-year gas concession from the junta. India will keep loosing to China, its diplomacy does not have the teeth of a sharky China. At the same time, India’s foreign policy has lost its moral foundation.
Suu Kyi’s family was close to India’s First Family. When Suu Kyi’ father was assassinated Nehru wrote: “I mourn Aung San, friend and comrade, who even in his youth had become the architect of Burmese freedom.” Young Suu Kyi was then two years old.
A few years later, in the early 1960’s, her mother Daw Khin Kyi was appointed Burma's ambassador to India. Suu Kyi, a young girl of fifteen with long thick plaits, joined Lady Sri Ram College in Delhi. She knew Indira and her sons well.
Today, everyone has forgotten her, one could say for a few drops of oil more, but it is not even true. And what about her old collegemates in LSR? Several of them are today in positions of influence, but they have also forgotten her. It is the tragedy of a world running on oil, not on Dharma.
Posted by Claude Arpi