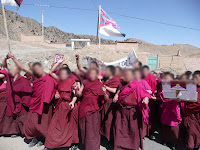 A group of Chinese independent lawyers has just published an interesting report entitled: "An investigative report into the social and economic causes of the 3.14 incident in Tibetan areas"

Here is some of their conclusions and recommendations:

For the sake of the long-term harmony and unity of the state, the 3.14 [March 14, 2008] incident in Tibet is worthy of our deep reflection. If external factors alone are emphasized and we ignore reflections upon internal social and political structures, this would be irresponsible to the long-term interests of the state. Against the great background of modernization, although there have been great developments to the economy in Tibetan areas, compared to other provinces, other countries, and even ordinary people of other nationalities living in Tibetan areas, it is still evidently backward. This is particularly so when more and more people from elsewhere are acquiring great wealth in Tibetan areas, and unintentionally creating a sense of relative deprivation. At the same time, religious traditions have come under attack from modernization, and many young Tibetans have been cast into a state of puzzlement and confusion. Behind all of these questions lies an urgent problem, and that is the problems in our country’s political structures. Power relations from top to bottom have created a group of local Tibetan cadres who use the resources of authority that come to them from above in order to build a complex network of contacts in nationality areas, where the state’s economic assistance largely becomes used for career projects for the few, or for the personal wealth of the few. They are not good at facing the masses, not good at facing a society in the process of development and with a plurality of thought, and they frequently stir up social contradictions and then hope that the central government will foot the bill. Ordinary Tibetans have a far keener and evident sense of deprivation than any sense of government help, and like many people living in provinces in the interior, are deeply discontented with the local power-brokers. This accumulation of frustration and anger over a long period of time with the added fuses of religion and external forces led to the 3.14 incident.
We believe that at present, there is no factual basis for the “extinction of Tibet” as described by some. In the main, Han-Tibetan relations are good. However, following the chaos of 3.14 in Tibetan areas we discovered that there are many prominent contradictions and hardships in society in Tibetan areas. We tried to understand this situation by means of research and documentary analysis, and to understand the living conditions of the masses in Tibetan areas. This report is only the reflection of a merest glimpse, and such perspectives can in no way cover all of the issues facing Tibetan areas. However, it has been based on the intention to understand the changes taking place in Tibetan areas, and at the same it is hoped that it will bring about further and ever more detailed exploration.
We call for ethnic relations of “unity, equality, mutual assistance, harmony and people first,” and “a unified multi-ethnic joint struggle, common construction, common prosperity and shared success.” The prerequisite is for the government to fully recognize the citizen status of ordinary people in Tibetan areas, to ensure the rights and interests of ordinary Tibetan people, and that conceptual thinking needs to adapt to the social reality of Tibetan areas in a period of rapid modernization, where it is hoped to be able to be unencumbered by current ideological frameworks to broaden horizons and make policy breakthroughs.
In focusing its research on the social factors of the “3.14 incident,” the research panel presents the following suggestions:

2. Guide the rational development of economic structures in Tibetan areas, paying particular attention to guiding all Tibetans to share in acquiring ample benefits from opportunity and development. Pay attention to nurturing local economic entities; in the process of support, pay close attention to changing the degree of serious inequalities, reducing the discrepancy between urban and rural rich and poor in Tibetan areas; extend the scope of Aid Tibet to Tibetan autonomous areas outside Tibet. Continue the model of economic development based on a combination of financial aid, technical assistance and human resource expertise, and adopt measures to attract foreign investment at the same time as taking appropriate measures to protect local industries. In the labor market pay close attention to fully protecting the employment rights of Tibetan people. In farming and nomadic regions within Tibetan areas, promote support and protections which benefit the individual.

3. Increase effective supervision over local power structures in the implementation of regional ethnic autonomy policies, and speed up the process of democratizing power structures. End tolerance of corruption, poor administrative abilities and dereliction of duty which is apparent in government in Tibetan areas, and in particular of those officials who suppress local social problems in the name of “anti-splittism.” Establish more rational and democratic selection policies for Tibetan cadres in order to optimize current cadre structures.

4. Pay close attention to the living situation of young Tibetans, and with the greatest good faith resolve current education problems in Tibetan areas, particularly the problems of rural education and education for farmers and nomads, and by means of subsidies and guidance entice children to complete nine-year compulsory education. Continue to develop and encourage training mechanisms for highly skilled personnel in Tibetan areas, and to optimize specialized knowledge structures among college students. Speed up and improve grass-roots professional technical education in Tibetan areas, and using the method of joint work and study as used in schools in the eastern provinces, allow Tibetan students to set out and increase the degree of training in schools’ high-tech content and training in practical production in Tibetan areas, in order to train up skilled workers and eliminate all barriers for encouraging varied Tibetan employment and entrepreneurship. Particular attention should be paid in school education on extending and developing appropriate content on Tibetan history and culture, and increasing the civic awareness content of the training. Education and training must be regarded as the most important long-term resolution to the question of Tibetan areas.

6. When resolving problems in Tibetan areas, thinking must be transformed; adopt appropriate measures and thinking which is more positive and wise. With the guiding thought of facilitation, understanding and integration, reduce inter-ethnic prejudice, ignorance and injury. When handling sudden incidents, change the overly-strong attitude of “from top to bottom,” and wisely mobilize positive forces in Tibetan areas (such as religious forces) to solve them.

7. Promote rule of law in governance processes in Tibetan areas. Urge the introduction of laws and regulations as represented by ordinances in the Tibet Autonomous Region and other autonomous areas, to change the current status quo of a lack of lower laws since the promulgation of the Regional Ethnic Autonomy Law. Regulate the ownership rights and disposal rights of key natural resources. Encourage positive expert participation in advising and discussing all aspects of policy in Tibetan areas.

8. When upholding and propagandizing construction to the state of ethnic unity, propagandize the successes of reform and opening up in Tibetan areas instead of depicting the past system of serfdom. At the same time as manifesting the vitality of development, admit to the social problems facing Tibet. Be vigilant against the dark racist waves of secession and ethnic revenge.

9. When handling crisis situations, it must first be discerned whether there is a social problem, an economic problem, or a religious problem, with different problems having different means of being handled. The central government should be in the position of “arbiter,” and maintain a distinction to the best of their ability from local officials’ inappropriate conduct. Sensitive incidents should be “de-sensitized” to the greatest degree.

To read the full Report, visit http://www.savetibet.org/media-center/ict-news-reports/bold-report-beijing-scholars-reveals-breakdown-china%E2%80%99s-tibet-policy
Posted by Claude Arpi at 4:13 PM