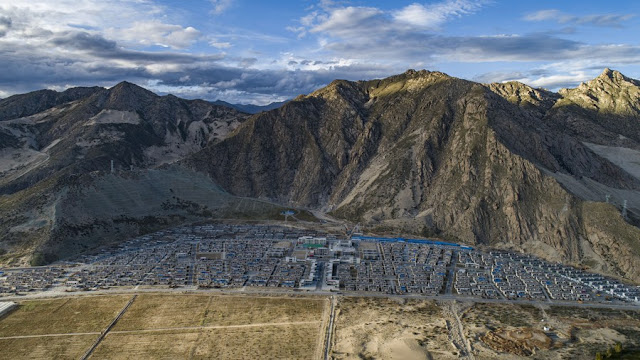 Three years ago, we mentioned a large scale relocation program on this blog.
It looks as if the Chinese government has decided for another round.
On June 30, The China Daily published an article announcing “Thousands to be relocated from high altitudes.”
Two days earlier, Xinhua had published another article on the same topic with different figures.
The second article reported that some 26,300 rural residents (from 6,306 households) would be relocated to a site named Sinpori in Lhoka prefecture (City) before August 11, 2022. When one looks at the location, it is strikingly close to the Gongkar airport, the main airport  for civil and military use on the plateau.
Why to bring a new town in this strategic area is a mystery. The China Daily says that thanks to the Tibet Autonomous Region's (TAR's) relocation policy, “started in 2016, many rural residents living at altitudes above 4,800 meters have been moved to lower valleys more suitable for human habitation.”
The rationale for the scheme is that the nomads living in high altitude in Ngachu City can’t breath at altitude above 4,000 or 4,500 meters. But they survived quite well for centuries.
The mouthpiece of the Communist Party further explains: “The latest relocation plan will help residents from 58 villages in 12 townships in the counties of Tsonyi, Amdo and Nyima in Nagchu. With an average altitude above 4,500 meters, Nagchu is one of the region's highest cities. Residents are mainly herders and nomads, most of whom change their dwelling and herding pastures a few times in a year.”
Why to move nomads to sedentary ghettos? 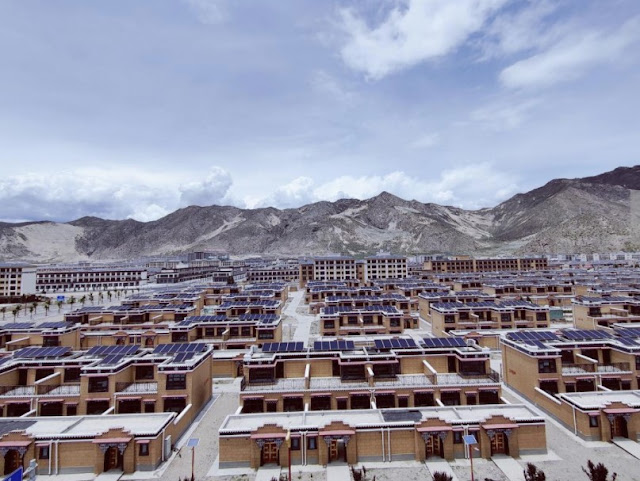 One of the reasons is that it is easier to control  and monitor the nomadic population when they are brought in these new townships, often located at the border with India (and equipped with facial recognition cameras, etc).

perhaps because nomads are born-free, they are an issue for the totalitarian regime in Tibet.

Scheme Over in August
The China Daily says that the relocation is planned to be over on August 11, 2022: “The first group of families is expected to arrive in their new community by July 15.”
The article adds that being the busiest time for the nomads: “some residents will remain in their original places.”
What is the big hurry in any case …except if the TAR government is planning to immediately re-employ the nomads on some large infrastructure projects near the airport or at the airport.
Finally, the article says that to ensure the safety, smooth traffic, control of the pandemic as well as proper medical rescues and emergencies, “more than 200 government workers from all walks of life have been dispatched to relocation sites to provide support.”
The government of Lhoka was asked to accelerate infrastructure construction, including housing, water and electricity supplies, traffic, schools and clinics.

A First Article
A few earlier, Xinhua had announced that a total of 17,555 people were to be relocated away from Nagchu City, ”thanks to a local program to improve people's living and protect the plateau region's fragile ecosystem.”
Quoting Wu Wei, director of the regional forestry and grassland administration, Xinhua asserted: “The people had lived in places with harsh weather and relatively backward production and living conditions, where the grassland degraded. The relocation scheme reflects a people-centered development thought, taking into consideration both the ecological protection and people's demand for a better life," Wu said.
The fact is that for centuries, it is the nomads and herders who looked after the conservation of the natural environment; it is of course not mentioned (or even taken into account).
The objectives of the relocation scheme is somewhere else, as Xinhua admits: “The region's overall relocation plan will cover more than 130,000 people in Tibet's nearly 100 townships in eight years.”
This is big, and for India, it is a worry, as many of these new township may come near the border.

What is striking is that ONE-THIRD of the population is being relocated.
Why such large percentage?
What will happen to these already sparsely inhabited areas?
It looks a certain death for these counties? 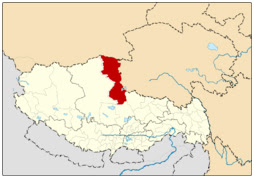 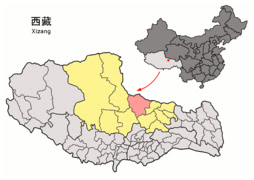 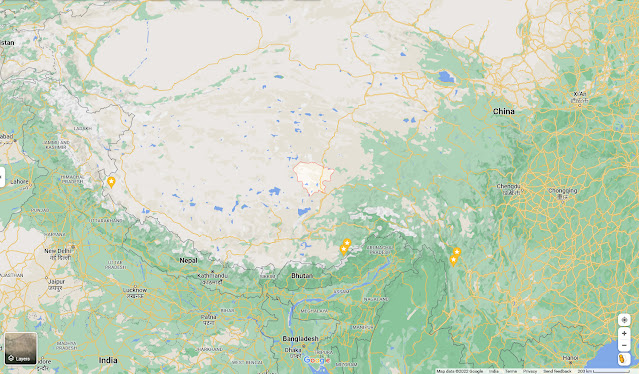 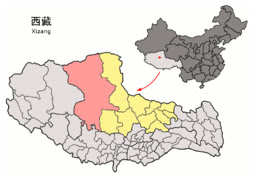 Location of Nyima County within Tibet 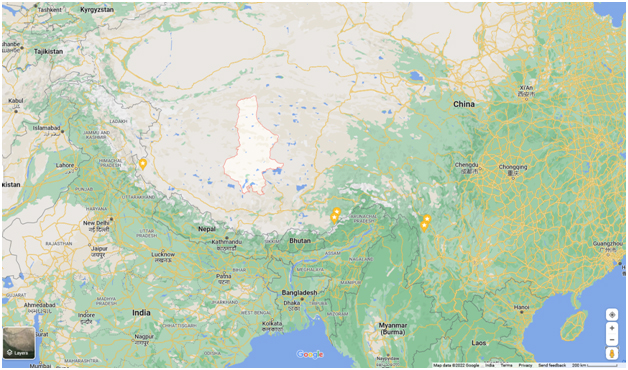 Tibetan: ཉི་མ་རྫོང་།, Wylie: nyi ma rdzong,
Simplified Chinese: 尼玛县; traditional Chinese: 尼瑪縣; pinyin: Nímǎ Xiàn)
The northern part of the county is within the Changtang area.
With an area of 72,499 km2 (27,992 sq mi) and a population of 29,000 (2012), it has an average population density of less than 0.4 people per square kilometre.

The scheme raises some important questions:

The developments in the area need to be watch carefully.
Posted by Claude Arpi at 11:09 AM