How China lost a friend in Ladakh 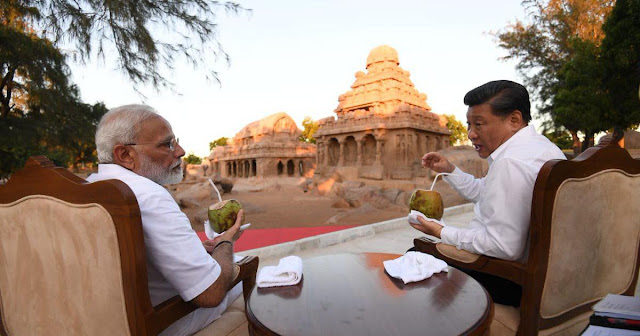 My article How China lost a friend in Ladakh appeared in Mail Today/DailyO
Here is the link...
Post-Covid-19, China is facing great internal difficulties, why pick fights with most nations and particularly India?
During his visit to Nimu, near Leh (Ladakh), Prime Minister Narendra Modi interacted with the Indian troops facing the People’s Liberation Army (PLA) on the border; in his address, Modi stated: “Indians can go about their lives peacefully because they know that our Armed Forces are standing firm, protecting the nation.”
Connected or not with the visit, two days later, probably feeling that the wind was turning, the Chinese asked for talks. For Beijing, the situation had taken unexpected turns; the Communist leadership had not realised that Delhi could take retaliatory measures so fast.
Wang Yi, China’s clever Special Representative (SR) and Minister of Foreign Affairs, spoke on the phone for two hours with Ajit Doval, his Indian counterpart and National Security Advisor.

Status quo question
The two SRs agreed that maintenance of peace in the border areas was essential and “[the] two sides should not allow differences to become disputes.” It is China who created the ‘differences’, not India. The SRs also spoke of the necessity to ensure “at the earliest complete disengagement of the troops along the LAC and de-escalation from India-China border areas.”
Indian observers are doubtful that the so-called disengagement would be sincerely completed. Geo-strategist Brahma Chellaney, wrote in a newspaper column: “A full return to status quo ante as sought by India seems remote, thanks to India’s own mixed signals. By encroaching on additional areas behind the previous disengagement facade, China has armed itself with greater leverage to impose a revised status quo.”
India should study the classic Unrestricted Warfare written by Sr Col Qiao Lang and Wang Xiangsui some two decades ago; the Chinese officers advocated “Ten Thousand Methods Combined as One”; they believed “the war will be fought and won in a war beyond the battlefield; the struggle for victory will take place on a battlefield beyond the battlefield.” India needs to use new ‘methods’, such as banning 59 Chinese Apps or cancelling major infrastructure projects involving China.

Steps to be taken
Unfortunately, Delhi has lost an excellent occasion when the Dalai Lama turned 85 on July 6. It would have cost nothing for the Prime Minister to tweet his best wishes for good health and long life to the Tibetan leader; it did not happen. The Foreign Secretary, who is from Sikkim should also have paid his respects to the Dalai Lama. This would have sent a strong message to Beijing, that Tibet, is closer to India than to China.
Today, the only way to have a fair chance on the battlefield is to have ‘ten thousand’ such small messages sent to Beijing; otherwise, the battle is bound to be lost. This reminds me of the visit of Chinese President Jiang Zemin to the Swiss Parliament in 1999. He didn’t like the presence of pro-Tibet demonstrators ‘greeting’ him on his arrival. In a speech to the lawmakers, he said: “Switzerland has lost a good friend”. The Chinese President was so angry that during the following State banquet with the Swiss authorities, he refused to eat.
In a different context, the Prime Minister and the External Affair Minister should show their anger at Xi Jinping, and let him know, “you have lost a friend”. Ambitious generals in Chengdu’s Western Theater Commands sold the idea to Xi to place the PLA troops on the LAC in new positions, better located to destroy, if necessary, the new infrastructure built by India in East Ladakh; but in the process, Xi Jinping lost the trust built during the Wuhan Consensus in 2018 and the Chennai Connect in 2019. Both exercises were meant to build confidence at the highest level of the State, without being bothered by any protocol or a formal agenda. A few powerful statements would have an effect; it would put pressure on the Chinese President from within the Communist Party. By using more ‘ten thousand methods’, India could make sure that Xi’s actions are questioned by the Party’s elders; particularly during the forthcoming yearly summer conclave in the beach resort of Beihai.
Post-Covid-19, China is facing great internal difficulties, why pick fights with most nations and particularly India? There is no doubt that many in China are waiting for such an occasion to question Xi. A few points need to be noted in the current crisis in Ladakh, which is bound to last till the winter. Himalayan and Border studies must be developed in India. Most present studies remain in the philosophical domain, instead of the strategic, defence and historical field; for example, why don’t organisations such as the Indian Institute of Advanced Studies in Shimla and other such institutions, start such study programmes?

A lesson from history
Ultimately, the Historical Division in the Ministry of External Affairs should be reopened (it was closed by all-knowing mandarins in the 1990s). Similarly, a historical cell or directorate should be set up by the Department of Military Affairs headed by the Chief of Defence Staff. It would greatly help officers serving on the borders (for example officers of the 14 Corps negotiating with their Chinese counterparts) to have a wider understanding of the overall situation (something the Chinese have). It would have wide positive consequences for the preparedness of the Defence forces. It is a fact that it is part of modern warfare; the Chinese have understood this long ago.

Isn’t it true that it was mainly an event by WTC commander to please his bosses ... and he lost it totally ... who goes back remains a huge question but with new docking facilities near the fox hole it seems India is in for tough choices here