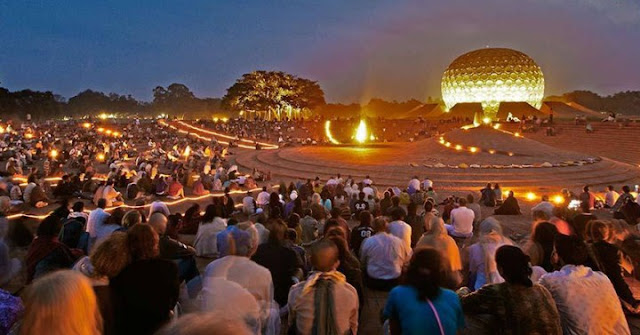 My article The Experiment called Auroville appeared in The Mail Today.

On the last day of February 1968, some 5,000 people, young and not so young, gathered on a barren plateau of red laterite, some ten kms north of Pondicherry, the former French Establishment.
It would have been a very special moment for those present that day; it was like the birth of a ‘Dream’ which had rarely been attempted; to bring people from different countries, races, religions, backgrounds in one single place to build a city together, ‘a Tower of Babel in Reverse’, in the Founder’s words. 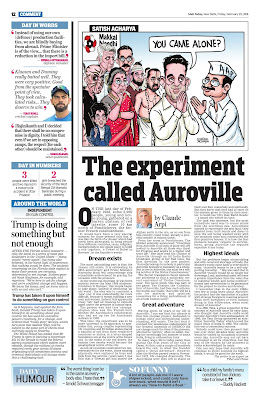 The most astonishing part is that the ‘dream’ still exists; it is celebrating its 50th anniversary and the Prime Minister of India will acknowledge this remarkable achievement by gracing the occasion with his presence.
As the world was churning (it was three months before the May’ 68 students’ revolution in Europe), this utopia began to take shape; instead of destroying ‘an old world’, the idea was to construct a ‘new’ one; it was undoubtedly far more difficult, because it meant building a new men and women. Indeed, this apparently crazy ‘lab’ had all chances to explode apart under the pressure of human egos.
The person who had this ‘strange’ utopian idea was the French-born Mother, Sri Aurobindo’s collaborator, who had set up the Sri Aurobindo Ashram in 1926.
This time, the experiment was to be more ‘universal’ in its approach; to symbolize this, young couples representing 121 countries and 23 Indian states placed a handful of soil from their respective countries or states, in a lotus-shaped foundation urn at the centre of the future City. In the midst of the red desert, the banyan tree nearby would become the geographical center of the City.
As not all countries could send two representatives for the event, those missing physically were replaced by boys and girls from the Ashram (years later, I was told that a Tibetan girl had placed the Afghan earth in the urn, as no one from this country could come; already a powerful symbol of Human Unity).
From her room in Pondicherry, The Mother solemnly announced: “Greetings from Auroville to all men of good will; are invited to Auroville all those who thirst for Progress and aspire to a higher and truer life.” She later read the Charter of Auroville through an All India Radio broadcast, giving, in her frail voice, the first direction to the new project: “Auroville belongs to nobody in particular. Auroville belongs to humanity as a whole. But to live in Auroville, one must be a willing servitor of the Divine Consciousness.”
The Soviet translators faced immediate problems to find a politically correct equivalent of ‘Divine Consciousness’, but never mind, this was part of the game. The Charter, the ‘Constitution’ of Auroville, had four such articles; the fourth one reads: “Auroville will be a site for material and spiritual researches for a living embodiment of an actual human unity".

The Great Adventure
Having spent 43 years of my life in Auroville, I can say that the miracle is that this utopian project, dedicated to human unity and international understanding, still exists.
The fact that it received the unanimous endorsement of the General Assembly of UNESCO did not change much the lives of the pioneers, who had to ‘survive’, often on millet, during the scorchingly hot summer of South India, living in rudimentary huts.
In many ways, life is today easier than during the first years of the City of Dawn. At first, only a couple of hundreds heard the call, to what the founder called a ‘Great Adventure’. However, after the Mother passed away in November 1973, life changed drastically. The Aurovilians were then left to stand on their own feet, materially and spiritually. But they knew that they had to carry on the mission given to them by their mentor, to built the ‘City that Earth Needs’; a smart city before its time.
The task was immense, but the most immediate need was down-to earth, to create shade from the scorching sun. Aurovilians started to rejuvenate the arid land; they planted trees, built bunds and dams to stop the soil being washed away with the monsoon rains and constructed the first primitive houses. It is how the first pioneers became ‘experts’ in environment, giving Auroville the reputed expertise it has today.

The Highest Ideals
But the problems began accumulating and with recurrent shortage of funds, the Mother’s words, came back to everybody’s mind: “Auroville wants to be a self-supporting township…” She had had also said that in Auroville “money would be no longer the Sovereign Lord, individual merit will have a greater importance than the value due to material wealth and social position”; money had nevertheless to be generated for the project to survive and develop.
I remember that in the early eighties, very few in India knew about Auroville; the project had the reputation of a place with strange foreigners roaming around. What were foreigners or even Indians doing in this wilderness, when most dreamt of America?
It is JRD Tata, a great supporter of the concept of Auroville since its early days, who thought that Auroville crafts could become Auroville’s best ambassadors. In 1980, the Tata Group sponsored an exhibition Auroville Today which toured the major cities of India in 1980. The exhibition was a tremendous success.
Nobody could have then guessed that just over three decades later, Auroville would be visited by thousands of people every day. Auroville may not yet have succeeded in all its objectives, but the way of life chosen by the pioneers is today acknowledged by many.
One can only hope that Auroville will continue to strive towards its highest ideals; it would be good for the earth.
Posted by Claude Arpi at 6:34 AM