Post-Doklam, Chinese aggression not yet over 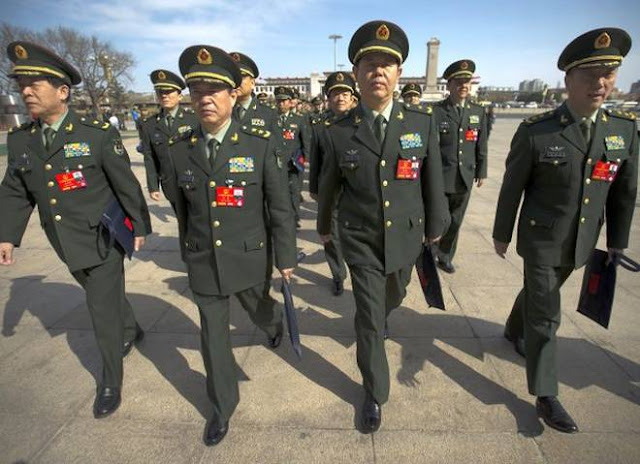 My article Post-Doklam, Chinese aggression not yet over appeared in the Edit Page of The Pioneer.

The renewed Chinese aggressiveness, including against India's Army Chief, is probably triggered by a great sense of insecurity, not to say instability. The battle for Chairman Xi is far from over
The Doklam incident is over and one could say, ‘All’s well that ends well’, to paraphrase the title of Shakespeare’s play. Lessons should, however, be drawn from the nearly three-month long confrontation near the tri-junction Tibet-Sikkim-Bhutan. Even once a bilateral agreement has been found, China has remained belligerent. Aggressiveness is still over-present in the Chinese official media.  Can it be due to the fact that China lost face and had to withdraw from the disputed area without building a road?
Chief of Army Staff General Bipin Rawat had just to say that India needed to be prepared for a two-front war and The Global Times went ballistic. The communist party’s tabloid asserted, “While many people believe it is time to leave the episode of the border stand-off behind, Rawat has sent the completely opposite message.”
Verging on vulgarity, The Global Times wrote, “Rawat has such a big mouth that he could ignite the hostile atmosphere between Beijing and New Delhi. He not only turns a blind eye to international rules, but also made us see the arrogance probably prevailing in the Indian Army.”
Incidentally, who broke ‘international rules’ in the first place? There was nothing wrong in the Army Chief’s remarks, but the tabloid added: “Generals in India need to form some basic knowledge about the current situation. …It seems that there are two India(s), one that is thriving and …the other that keeps provoking and tangling with China. Should we embrace the first India or teach the second India a lesson? Let the first India discipline the second one and the Indians with dignity should take care of the mouths of senior officials like Rawat.”
The party mouthpiece then invites India to reflect.

Why such aggressiveness?
One answer is that all is not well for Chinese President Xi Jinping, especially within the People’s Liberation Army (PLA). His in-depth reforms are not appreciated by all. Just a few weeks before the party’s 19th Congress (scheduled to start on October 18), an important reshuffle of the PLA’s generals has taken place, not only at the Group Army (Corps) level, but at the top of the hierarchy too.
US-based publication, Quartz, wrote: “As the big day nears, lots of the behind-the-scene political struggles are gearing up,” adding that Xi has promoted favorites to top posts in the PLA. In the process, two top generals got the sack hardly a month before retiring.
Bloomberg explained the move: “Two generals who sit on China’s top military body have been excluded from a twice-a-decade leadership reshuffle next month, setting the stage for President Xi Jinping to carry out a further shake-up of the world’s largest Army.”
General Fang Fenghui, the equivalent of the US Chief of Defence Staff, was one of China’s most visible officers — he accompanied Xi to Florida to meet US President Donald Trump in April and received his US counterpart last month. Soon after, he was replaced as Chief of the PLA’s Joint Staff Department by General Li Zuocheng, a Xi favorite. His name and General Zhang Yang’s, another member of the all-powerful Central Military Commission (CMC), were not on the list of the delegates to the Congress.
The rumour mill said that they were being ‘investigated’, a term not usually auguring well for the targeted person. This may indicate disciplinary probes and bad days ahead for the generals.
Bloomberg asserted: “As many as five members of the top military body were already expected to step down under an unwritten rule marking senior officials for retirement after 68. Fang and Zhang are [were] among five members below the threshold, which would put them in contention for a powerful vice chairman post.”
Hong Kong’s publication, Sing Tao Daily, usually well informed, quoted sources in Beijing, to say both were investigated for suspected breaches of party discipline.
Indian analyst, Brahma Chellaney suggested that the reshuffle was linked to the Doklam issue: “pullbacks suggest that the removed chief, General Fang Fenghui, was an obstacle to clinching a deal with India and probably was responsible for precipitating the stand-off in the first place.”
To support his argument, he quoted the Chumar incident in Ladakh which happened as President Xi landed in India on a state visit in September 2014; a theory difficult to confirm. It is, however, clear that a younger generation is taking over. This reflects the deep changes in the PLA…and this may have triggered resentment amongst the ‘retiring’ officers.
On September 1, General Han Weiguo, only 61, was appointed commander of the PLA Army and 60-year old General Ding Laihang, commander of the PLA Air Force (PLAAF). General Han served in Fujian in the 1980s at the time Xi was Deputy Mayor of Xiamen, while Gen Ding’s career also overlapped with Xi’s term in Fujian. He was Chief of Staff of the eighth corps based in Fuzhou in 2001 and later head of the PLAAF in Fuzhou; Xi was then Governor of Fujian Province.
The list of PLA’s delegates to the 19th Congress has some surprises. The 303 ‘elected’ members belong to 31 different units, compared with 19 in 2012; one example, the new PLA rocket force is now represented. While the PLA itself has 253 delegates, the People’s Armed Police has 50.
According to The Global Times: “The number of units increased due to the ongoing military overhaul launched in 2015, which split the former four military headquarters — staff, politics, logistics and armaments — into 15 new agencies.”
Interesting are the general statistics. More than 90 per cent of those ‘elected’ will be first time attendees, representing a new generation of officers who will owe their rise to Chairman Xi, who heads the CMC.
According to The Asia Times, the ethnicity factor plays an important role in promotions: “while sweeping military change is on the cards at China’s upcoming communist party Congress, few expect ethnic minority officers from unstable regions to make top brass.”
Though there is a slight rise in the number of ‘ethnic’ delegates (six per cent of PLA delegates are ethnic minority officers, from 4.6 per cent at the 18th Congress), their number is relatively small and they don’t occupy important post.
Asia Times noted: “The Manchus and Tibetans will each send three delegates, while the Uyghur, Hui and Tujia will each put forward two. The Zhuang, Xibe, Korean, Qiang, Bai and Naxi ethnicities will each send one delegate to the Congress.” Incidentally, two of the three Tibetan delegates are lady officers.
‘Ethnic representation’ has always been limited to junior ranks “but thins out considerably at higher levels. There are comparatively few generals of ethnic minority backgrounds,” writes The Asia Times. It is telling that the PLA has never seen Uyghur or Tibetan commanders posted in their own military districts.
The renewed Chinese aggressiveness, including against India’s Army Chief, is probably triggered by a great sense of insecurity, not to say instability. The battle of Chairman Xi is far from over.
Posted by Claude Arpi at 7:43 AM