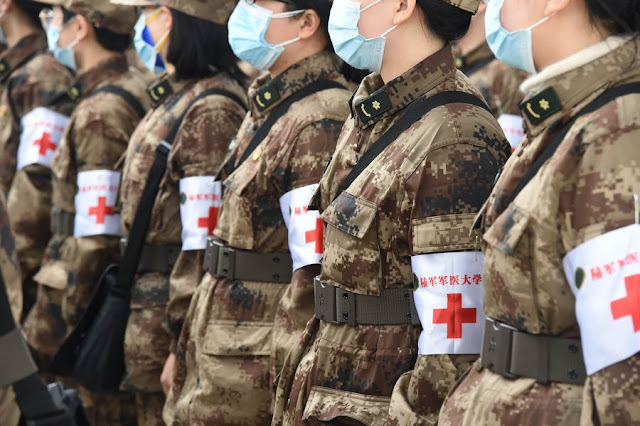 From Day One, a PLA unit has been on the central stage of what the Communist Party of China called the 'People's War' against the 'demon' virus.
We all know that the world will be different once the coronavirus crisis is over; very few countries will be spared. China, the origin of the virus, whether it came from the wet market or the Wuhan Institute of Virology, will never be the same too; more importantly, the Middle Kingdom will never be perceived as before. Further, Beijing is bound to face tremendous economic difficulties. Will Beijing be able to find innovative solutions and the Communist regime be able to adapt to the new realities? It remains to be seen.

Handpicked by Xi
In this context, it is interesting to look at the role played by the People's Liberation Army (PLA) during the pandemic and at the future of the Chinese Armed Forces, which could become far more aggressive in view of the general economic slowdown. From Day One, a PLA unit, the Joint Logistics Support Force (JLSF), has been on the central stage of what the Communist Party of China called the 'People's War' against the 'demon' virus.
There is no doubt that the Communist authorities were lax, to say the least, during the first weeks; it is only on January 23, more than one or two months after the apparition of the first cases of coronavirus pneumonia, that the Joint Logistics Support Force (JLSF) troops entered the stage. The Force was created on January 11, 2016 as part of Xi Jinping's Dream of a rejuvenated China with a modern powerful and efficient Army; according to Xinhua, it "comprises the support forces for inventory and warehousing, medical services, transport, force projection, oil pipelines, engineering and construction management, reserve assets management, and procurement." Coincidentally, it is based in Wuhan. Interestingly, on October 18, 2019, President Xi Jinping, also Chairman of the Central Military Commission (CMC), flew to Wuhan to attend the first JLSF Party Congress. According to Xinhua, Xi Jinping encouraged the JLSF delegates and other senior officers stationed in Hubei province "to faithfully perform their duties and contribute to fulfilling the dream of a strong military." The tasks for the JLSF were already clearly defined and once the COVID-19 broke out, it was soon implemented on the ground; in fact, it became a mega military exercise for the Force. The PLA immediately made the headlines by building the Huoshenshan 1000-bed field hospital in 10 days.
During the entire crisis, China has demonstrated an amazing opacity, whether it is about the origin of the virus or the number of infected cases and casualties, while Xi's presence remained central to the propaganda. At a press conference on March 2, Maj Gen Chen Jingyuan, Director of the health division of the Logistic Support Department made an astounding statement; he announced that the pneumonia outbreak did not cause cases of infection among the involved PLA personnel, while it improved the combat readiness of the Chinese military instead. One can believe the second part of the statement, but the first part can only make one smile.

Lack of transparency
Significantly, it was from the command centre at Huoshenshan hospital, that on March 10, Xi announced the 'Victory'. Five weeks later, Xi signed an order of commendation to honour all the military personnel who participated; the order said: "The whole military has resolutely carried out the decisions and commands of the Communist Party and the CMC and shouldered heavy responsibilities, making outstanding contributions to winning the people's war against the epidemic." Commendation is one thing, but what will happen to PLA post coronavirus crisis is another; the Armed Forces may be cut.
The Global Times already announced that the military budget will be hit …only mildly. The budget figure is expected to be announced at China's annual two sessions, to be held at the end of May: "The defense budget may grow more slowly than in 2019, rising to about 1.27 trillion yuan ($179 billion), or it may fall to only 1 trillion yuan," some knowledgeable analysts predicted. If it is so, this projection is not mild, it is more than a 20% official cut. Will this be taken 'mildly' by the PLA victors? It is doubtful.
In recent weeks, China has shown a renewed aggression, whether it is in the South China Sea or on the Indian borders. On April 18, Sky Map, the Chinese public service platform working under the National Surveying and Mapping of China published new digital maps. At one point, Sky Map updated the map information and 'inadvertently' disclosed China's borders' claims, particularly in the area that they called 'South Tibet', i.e. the Indian State of Arunachal Pradesh.
Was this new aggression necessary at this point in time? In the meantime, the infrastructure in Tibet on India's borders has restarted on a war footing, even while public places, such as the Potala Palace in Lhasa, are still closed.

Another Doklam ploy?
On April 7, Xinhua reported that the construction on the last two of the 47 tunnels on a 435-km railway linking Lhasa and Nyingchi, near the Indian border of Arunachal Pradesh, had been completed "marking huge progress for the mammoth project." One tunnel is 11.5 km long, while the other is 8.7 km. Examples could be multiplied, particularly an electricity mega project near the Ladakh border in Western Tibet employing 4,000 workers and the PLA aggressive posture in Northern Sikkim or Upper Subansiri district. Historically, when the PLA does not get its 'dues', it starts diverting its aggressiveness towards external targets; in which case, a new Doklam is always possible.
Posted by Claude Arpi