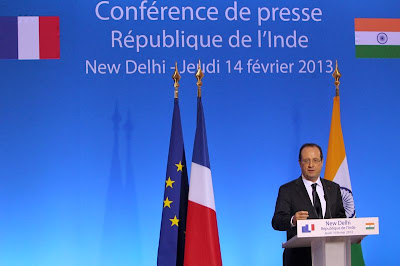 One French presidential visit to India follows another and although they can’t be more different in style and appearance, the essence of the Indo-French relations remains the same, based on trust and history.
Nine months ago, François Hollande became President of the French Republic. He took over from the flamboyant and hyperactive Sarkozy justifying the French press calling the new President, ‘Mr. Normal’.
It turns out that after all, Hollande is not that ‘ordinary’. As France was busy with a hot debate over gay marriages, Hollande suddenly became a chef de guerre, a Commander-in-Chief when he sent French troops to Mali.
Moreover, the new President had scored over his predecessor even before reaching Delhi. While Carla Bruni did not get the coveted status of ‘spouse’ during Sarkozy’s first visit in January 2008, Hollande's partner, Madame Valerie Trierweiler, was treated as such during Hollande’s State visit to India, being officially received at Rashtrapati Bhavan.
But the Indo-French relations go far beyond society gossip or the tight MEA protocol.
In December 2010, as I was in the bus with the French journalists returning from Hyderabad House (where Sarkozy and Dr. Manmohan had issued a Joint Statement) to the Media Center in the Maurya Center, everyone was busy with calculators to check the ‘total’ of the agreements signed. President Sarkozy’s tally reached 17 billion Euros; this was including 9 million for two Areva nuclear plants in Jaitapur, Maharashtra (not yet started), the refitting of the Mirage 2000 and other sundries.
This time, there was no big money contract ‘signed’ during Hollande’s visit, but the new President took time to speak to his interlocutors, whether they were businessmen, researchers, journalists or ordinary French citizens. Never, did I got the impression of a man in a hurry, a big difference with his predecessor.
The four agreements, signed at Hyderabad House after a meeting with the Indian Prime Minister, included initiating a Cultural Exchange Programme between India and France (exchanges between artists, architects, cultural stakeholders, students, teachers, researchers, etc.); a Letter of Intent on the Intensification of Cooperation in the Fields of Higher Education and Research; a Statement of Intent for long-term cooperation in Space; and a Joint Statement to strengthen co-operation in the railway sector.
The agreements signed are not as ‘tangible’ as those inked by Sarkozy in December 2010, but signal a close and long-term partnership in diverse fields such defence, civil nuclear energy, space, economic and scientific exchange or culture.
What emerged clearly from the presidential visit is that the relation between France and India is ‘historic’, old, stable and based on trust. This was repeatedly mentioned during his two-day stay in Delhi and Mumbai.

The Defence Sector
In the critical domain of defence, the Joint Statement affirms: “the Leaders noted that the projects for the Scorpene submarine and upgrade of the Mirage 2000 are moving forward and steps are being taken for early finalization of the SRSAM Project [between MBDA and DRDO]. Both sides noted the ongoing progress of negotiations on the MMRCA [Medium Multi-Role Combat Aircraft] programme [Rafales] and look forward to their conclusion.”
‘The mother of all deals’, the supply of 126 MMRCA to the IAF, for which the Rafale of Dassault Aviation has been selected, was, of course, at the heart of the visit.
Someone noted that if Dassault’s karma is good, the deal may be signed before the summer. A week earlier at the Bangalore airshow, the Indian Air Chief had confirmed that the file would be sent to the Finance Ministry sometime in April/May and if it comes back with favorable notings, the deal may be signed soon after.
The main issue seems to be a lack of ‘understanding’ between Dassault and Hindustan Aeronautics Ltd (HAL). News had circulated that Dassault was keen to have a deal with Reliance Industries to build 108 Rafales in India (18 will be directly supplied from France). Defence Minister A.K. Antony had to clarify that Dassault could not decide on the quantum of work taken up by HAL in the deal, as the tender mentions that HAL will be the Indian partner of the French firm. The Anglo-Italian choppergate will certainly not incite the Government to change the rules of the game.
As per the Joint Statement, the two nations have decided “to promote an ambitious and balanced Free Trade Agreement between India and the EU; establish an annual bilateral dialogue on economic and financial issues; facilitate and support investments from French companies into India and Indian companies into France; foster people mobility between the two countries and twining of higher education institutions...”
It is rather ambitious.
President Hollande even spoke of Bollywoood; a joke which was lost to many: he asked: “who invented cinema, is it France or India?” and added that it would be finally decided during the next Cannes Festival which will be consecrated to the 100th anniversary of Indian Cinema.

Economic perspectives
An important part of the State visit was consecrated to economic cooperation. On the first day, addressing the Economic Forum held at the Taj Hotel, President Hollande gave a business perspective to the Strategic Partnership between the two nations.
Hollande pointed out that France is ranked 9th as an investor in India, “It is not enough”, he said, adding, “…India is ranked 13th as an investor in France, it is far too little.”
He regretted that the bilateral exchanges have been stagnating at 7.5 billion Euros, the objective of 12 billion (fixed by Sarkozy in 2008) not having been reached. In his own style, he asserted: “Me, I don’t want to fix objectives with figures, but what I know is that we have large domains of collaboration, great potentials and [possibility] of common development”.
He mentioned amongst others, the fields of energy, transport, audiovisual, culture and large retailing.
On the second day, the French President travelled to Mumbai where he toured the Lafarge Research and Development Centre and later addressed a number of CEOs of Indian companies. He told them: “Mumbai is India’s economic heart; I can feel it pulsating at high speed. It is India’s industrial, commercial and financial centre; the first port of your great nation. It is therefore the privileged place to speak about the future economic relations between France and India”.
The Mumbai leg of the visit was clearly to invite businessmen of both countries to develop closer contacts and eventually invest in each other’s economies. Indian CEOs were told: “More than ever we have to be partners, partners for growth.”
A day earlier, The Times of India had asked the President why France trails other European countries in trade with India? He had answered: “In France, as in India, we wish to boost growth. The development of our bilateral trade must contribute to that goal. But to state things frankly, Indian customs duties are very high in certain areas, such as the food-processing sector. The entire challenge of the Free Trade Agreement under discussion between the EU and India is to give fresh impetus to our trade both ways.”
Several times, Hollande mentioned Europe: “Our interests are linked. We, in Europe, want to create stability, trust, but also growth. You, here in India, like every important emerging nation, you should take part in the world’s growth.
He firmly added: “I can tell you, the crisis in the Euro zone is over”, but [to grow] France needs the help of the great emerging economies like India.”
A few days later, Prime Minister Cameron would speak the same language, minus mentioning Europe, of course.
While pointing out that French companies employ more than 2,40,000 skilled Indian workers, Hollande said that the trade should be balanced and mutually beneficial.
During the two days, whenever he had the occasion, the President invited Indian companies to invest in France: “You are welcome. You will find the best technologies in France, very good infrastructure, a workforce of exceptional quality”.
During a working breakfast, when senior heads of the Indian industry asked him if investing in France could be a window on Europe, he answered (in English, can you believe it!): “it is not a window, it is an open door”.
He insisted that he was not only addressing the large enterprises, but also the medium and small-scale industries.
He introduced to the audience the Special Representative for economic relations with India, Paul Hermelin, the Chairman of the large IT firm Capgemini. Hermelin’s job will be to try to bring some vitality to the relatively slow economic relations.
Hollande recalled several times that there are today 750 French companies working in India; he particularly mentioned the Banque Nationale de Paris which came 150 years ago to Mumbai.
But everything is not rosy. It is not always easy for French companies to ‘settle’ in India (that is perhaps why Dassault seems nervous). Take Snecma, a French multinational aircraft engine manufacturer based in France. For several years, Snecma worked with Gas Turbine Research Establishment (GTRE), a lab under the DRDO for the joint development of the Kaveri engine for India's Light Combat Aircraft. The Business Standard recently reported that the Ministry of Defence “will no longer ask French aircraft engine builder Snecma to help it in resurrecting the indigenous Kaveri jet engine, which has reached a dead end in development”.
Despite the goodwill and the trust, joint or single ventures are bound to face difficulties.
It is however worth mentioning an issue which has remained rather discreet, but which is the oldest collaboration between India and France; it is the cooperation in space.
During their discussions at Hyderabad House, President Hollande and Dr Manmohan Singh mentioned: “the success of Megha-Tropiques satellite launch in October 2011 and the upcoming SARAL satellite launch. Both satellites contribute significantly to environmental and maritime survey purposes.” The SARAL satellite was successfully launched on February 25 from Sriharikota in Andhra Pradesh.
The maiden visit of President Hollande in Asia could be best described as more than ordinary; it reveals a meaningful and trusted partnership. It does not mean that the road will not be bumpy.
Posted by Claude Arpi