I posting today extracts from the Monthly Report for October 1960 sent by the Political Officer (PO) in Sikkim (Apa Pant) to the Ministry of External Affairs in Delhi.
We can see that the Chinese are fast consolidating their presence on the plateau ("the programme of mass settlement of Chinese in Tibet has started. There are rumours in Lhasa that about 2.1/2 lakhs Chinese civilians are to be brought in and settled in Tibet in the very near future. Even at the moment the Chinese population both at Lhasa and Gyantse has increased considerably").
At the same time, communications to the Indian borders are built on war-footing, while the trade with India is progressively stopped.
Two years later, an armed conflict would erupt between India and China.
We know the outcome.
Nobody had seen the writing on the wall, though in November 1960, the PO wrote: "It has also been reported that roads have been constructed from Chusal to Bhutan border via Nagartse, Nalung, Talung and Ling. All these roads lead towards Tawang in NEFA."
Here is the report:

Infrastructure and Migration
Except for reports that there have been sporadic dislocations of traffic on Lhasa-Chamdo-Sining-Sinkiang [Xining-Xinjiang] highway due to guerilla action of the Khampas and of resistance by isolated pockets on the Nepal-Tibet border region, the resistance of the rebels in the regions round about the big towns of Tibet appears to have been not considerable. Chinese cadres continue to pour into Tibet in increasing numbers.
The programme of mass settlement of Chinese in Tibet has started. There are rumours in Lhasa that about 2.1/2 lakhs [2,50,00] Chinese civilians are to be brought in and settled in Tibet in the very near future. Even at the moment the Chinese population both at Lhasa and Gyantse has increased considerably.
Women cadres have also been brought in.
Lhasa now looks like a Chinese city where the Tibetans form only an insignificant minority. The lamas have been taken out of the monasteries and put to work as labourers and the monasteries are being used as public offices by the Chinese.
The Ramoche Monastery in Lhasa is now the head quarters of the traffic police while the Kundeling Monastery which had been damaged in March 1959 struggle, is after repairs being utilised to house the Chinese cadres. The houses vacated by the Kashmiri Muslims have also been occupied by the Chinese cadres.
The Chinese now appear to be in complete control of the administration.
The members of the former Tibetan nobility are in concentration camps except for those who had cast their lot with the Chinese Communists prior to the March 1959 conflagration, who have been given official positions and can be seen moving about in motor vehicles in Lhasa.
The Tibetans in Lhasa are being made to adopt the Chinese dress – the close collar coat and trousers while the traditional Baku is being discarded.
This sartorial reform is being ushered on grounds that it is more economical on clothing material.
Tibetan children above the age of 12 are being sent in large numbers for education and training to China which is to last for a period of between 3 to 5 years.
Apart from the general education imparted these Tibetan children would be systematically indoctrinated. There are reports that the younger generations of Tibetans appear to be quite enthusiastic over the reforms introduced by the Chinese authorities and opportunities offered to them.

Construction all-around
2. There are reports of all round construction activities being carried on by the Chinese in Tibet which is one more evidence of the consolidation of their hold over Tibet. A steel factory is coming up at Dode – a place near Lhasa. Cement though of an inferior quality is being produced in substantial quantities locally and is being utilised in the construction of important buildings.
At the foot of the Potala a four storey building is going up which is to be used as a Radio Station. This Radio Station will have special services beamed towards NEFA, Bhutan, Nepal etc.
A new building for housing the Chinese Foreign Bureau office is going up at Gyantse. Apart from construction of these administrative buildings residential quarters for Chinese settlers are also being constructed.
Telegraph and Telephone lines have been installed between Tsechen and Gyantse and telephone Telegraph poles are also being installed on the new Gyantse-Lhasa road. It is expected that the telephone and telegraph links between Gyantse and Lhasa will be completed by the end of November 1960.
A large number of new schools have been opened all over Tibet, there are eight schools in Lhasa alone. While Tibetan is taught in the lower classes in these schools, Chinese is taught to the students in the higher classes.

Trade being Stopped
3. Trade which was formerly in the hands of Indian and Nepalese traders and Kashmiri Muslims is gradually being taken over by the Chinese who have by their restrictive policies and heavy taxation driven out the non-Chinese traders.
A large number of Kashmiri Muslims have already left Tibet or are on the way out. Many Nepalese traders are also closing their establishments in Lhasa.
Most of the Indian shops at Phari have already closed down while those at Yatung are also in the process of closing down and within a month or two there will be only just a couple of shops left there.
There are only three Nepali shops left in Gyantse which are also likely to be closed shortly. The position on Gartok side is also no better. Chinese authorities have opened a number of shops in the towns where Chinese goods are sold, and as they do not look favourably upon the Tibetans and Chinese cadres patronising private shops the private shops have very little business left to them. Salt, borax and wool trade has already been taken over by the Chinese authorities.
It is only a question of time before the entire trade becomes a State monopoly to be directed and controlled according to the plan policies of the Communist authorities.

Communication with Mainland and to the Indian Border
4. About 60 vehicles ply each way daily between Lhasa and the Chinese mainland. There are reports of considerable movement of troops on the new Lhasa-Gyantse road. All these troops appear to be fresh arrivals from the mainland.
About 10,000 of them have passed through Gyantse during the course of a few days. It is suspected that this movement is towards Bhutan.
Reports have been received that Chinese have constructed a road connecting Nyiru with Ramto and Ramto with Yatung, this road has also been connected to Khangma.
It has also been reported that roads have been constructed from Chusal to Bhutan border via Nagartse, Nalung, Talung and Ling. All these roads lead towards Tawang in NEFA.
Reports have also been received that the Chinese have also constructed an aerodrome near Talung from where aircraft can very easily cover Bhutan and Kameng Frontier Division of NEFA.
Reports from Bhutan however indicate that there is no immediate concentration of troops on Bhutan border and possibly the Chinese troops have been proceeding towards Guru which is two days journey from Rhamtoi and Rham me and that probably the Chinese are moving towards Toi. 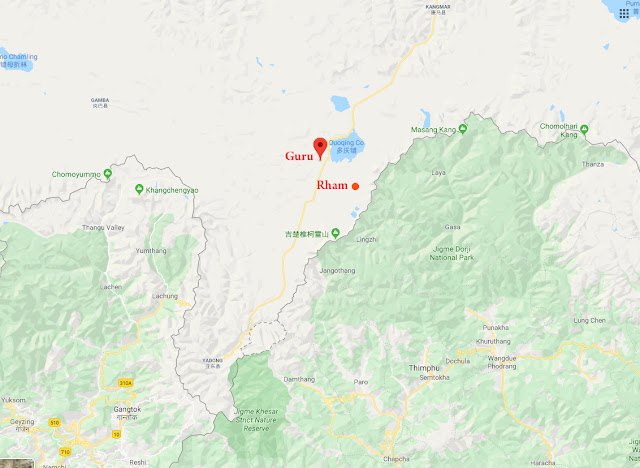 The Situation in Gartok
5. It is reported that there were very few Indian traders in Gartok this year. The Chinese authorities are not issuing certificates to local Tibetans traders to enable them to go for trade to the Indian side of the border thus reducing their contacts with Indians. Although the Indian traders have been allowed this year to visit the interior they have been informed that from next year they would not be allowed to proceed beyond the recognised trade marts.
Even otherwise it has become impossible for traders to function there as the Chinese authorities have banned export of live-stock as beasts of burden to India and as the Tibetans are discouraged from transporting goods across the Indo-Tibetan border and as there is lack of adequate transport facilities on Indian side of the border.
The 3% export and import taxes imposed on the traders is being realised in kind as traders in Gartok side are not in possession of local Chinese currency.
The goods are under-valued for purpose of taxes realised in kind but are over-valued for purposes of imposing the export taxes thus both ways the traders are being penalised and squeezed out. Trade Agent Gartok could not visit Tashigang trade mart this year because Chinese authorities failed to provide transport facilities and it was not possible for him to visit the other trade marts as winter was already advanced and it was late for him to go there.
Thus the Chinese have succeeded in preventing him from discharging his functions effectively. During his stay at Gartok the Trade Agent brought up for discussion with the local Chinese authorities the question of settlement of debts owed by local Tibetans to Indian traders but no solution could be found as the Chinese authorities were not prepared to permit export of live-stock – the only commodity in which the Tibetans could make their payment nor was it possible for him to get restored to the Indian traders their goods which they had stored at Tharchen in the house of the Bhutanese Officer in the previous year, since the Chinese insisted that the Bhutanese officer should come there personally to hand over the goods and this was obviously not possible.

Miscellaneous
7. The Panchen Lama accompanied by his parents and tutor Nbulchu Rimpoche proceeded to Peking to attend the [his] 11th anniversary celebration.

8. Floods in Gyantse this year have caused some damage to the [Indian Trade] Agency premises.

9. About 25 Russians have been seen in the month of September in Gyantse.