The Rafale deal is Modi's 'masterstroke' 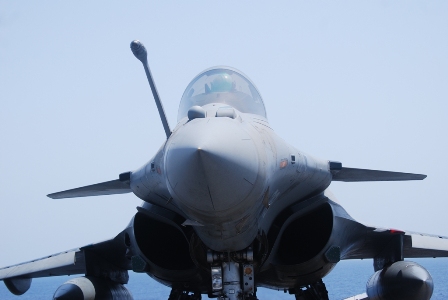 My article The Rafale deal is Modi's 'masterstroke' appeared last week in Rediff.com.

Under the present Defence Procurement Procedure, it would have been a nightmare, and a long, long one at that, to build 108 Rafales in India. Modi realised this and took the wise decision, though it is a definitive setback for his Make in India scheme,' says Claude Arpi.

Has the Congress started using the Aam Aadmi Party's tactics? You make any allegations against your opponent, whether true or not, and the media believes you; at the worst, nobody will check the veracity of your declarations.
It is the way the Congress trained its best gunners on the Rafale deal. According to PTI: 'The Congress alleged non-transparency in the multi-crore Rafale deal and questioned the Centre's move to bypass defence procurement procedure in the absence of inter-governmental agreement with France.'
The news agency quotes Congress spokesperson Tom Vadakkan, who 'informed' reporters in Goa: 'Till date, even the price of aircraft has not been disclosed by the Modi government. India does not have inter-governmental agreement with France for government-to-government purchases.'
There was no clarity even on the transfer of technology agreement, Vadakkan added.
The former defence minister, probably upset with his successor who was reported to have said that A K Antony had 'killed the deal by making several notings on the file,' also participated in the blitzkrieg: 'The present government has compromised our national security.' Antony also criticised the deal for the French fighter plane.
But let us come back to the facts.
First, no contract has been signed so far, negotiations are still on between the French team nominated by President Francois Hollande and its Indian counterpart. The details of the talks are not known, except that France agreed to a 25 per cent 'discount on its earlier offer for an off the-shelf purchase of 36 Rafale aircraft: This will be the base on which further negotiations will take place,' a French source told the Economic Times.
The basic price of the aircraft should be the same as the one paid by the French air force for a similar configuration.
'The overall cost is not expected to cross $8 billion for the entire 36 aircraft fleet,' ET added. The final price will include the cost of the aircraft, and also include maintenance facilities, training of pilots and technicians, some armaments and spares.
It is what is presently being negotiated.
Details of government to government talks are never made public during the negotiations; it is the normal procedure.
How did the 'deal' reach this stage?
On April 9, 2015, an Indian delegation arrived in Paris, ahead of Prime Minister Narendra Modi. Till that time, discussions were still on for the 126 planes (the bone of contention being the 108 planes to be manufactured by Hindustan Aeronautics Limited in Bengaluru), but the negotiations had reached a dead-end as Dassault was not ready to take on the responsibility for the work done by HAL and there were too many uncertainties/complications in the Defence Procurement Procedure to make the deal viable.
Modi's decision to purchase 'off-the-shelf' was a quick, pragmatic, and smart move. He brought the IAF's 'critical operational necessity' on the negotiating table, while dropping the Medium Multi-Role Combat Aircraft framework. We shall see why.
Prime Minister Modi confirmed the decision for a government to government deal during his press conference with President Hollande.
A few days later, Defence Minister Manohar Parrikar hoped that the Rafale would be inducted into the IAF in two years's time, adding: 'India has finally broken the ice over the deal which has been pending for the last 17 years.'
The Congress's accusation, that there is no procedure to by-pass the Defence Procurement Procedure, is absolutely wrong and it shows that Congress leaders have not done their homework.
Article 71 of the Defence Procurement Procedure deals with the possibility of direct purchase: 'There may be occasions when procurements would have to be done from friendly foreign countries which may be necessitated due to geo-strategic advantages that are likely to accrue to our country. Such procurements would not classically follow the Standard Procurement Procedure and the Standard Contract Document but would be based on mutually agreed provisions by the governments of both the countries.'

Article 72 further confirms the advisability of direct purchases in some cases: 'In cases of large value acquisition, especially that requiring product support over a long period of time, it may be advisable to enter into a separate inter government agreement (if not already covered under an umbrella agreement covering all cases) with the government of the country from which the equipment is proposed to be procured after the requisite inter ministerial consultation. Such an inter governmental agreement is expected to safeguard the interests of the Government of India and should also provide for assistance of the foreign government in case the contract(s) runs into an unforeseen problem.'
In the case of France, though it may not be considered as an 'umbrella' agreement, there is an 'agreement on defence cooperation' signed on February 20, 2006, by Pranab Mukherjee, then defence minister, and his French counterpart (Madame Michele Alliot-Marie). Article 4-3 says: 'The defence equipment sub-committee shall organise and direct cooperation in the field of equipment. It shall also be responsible for examining the issues relating to export controls of defence equipment and related items.'
Further, Article 73 of the Defence Procurement Procedure mentions a special procedure on 'strategic considerations:' In certain acquisition cases, imperatives of strategic partnerships or major diplomatic, political, economic, technological or military benefits deriving from a particular procurement may be the principal factor determining the choice of a specific platform or equipment on a single vendor basis.'
In this case, the IAF's 'critical operational necessity' was the imperative.
India regularly buys equipment from the US in a similar manner under the foreign military sales programme (for example, six Lockheed Martin C 130J transport aircraft were thus inducted in 2011. By who, did you ask? Why, by Antony himself!). The condition is that each deal is treated separately. With Russia, contracts are negotiated through a government agency called Rosoboronexport.
Major General Mrinal Suman, one of the foremost Defence Procurement Procedure experts, confirms that in any case 'a separate inter government agreement has to be signed for every deal.'
In the present case, it will be done when both parties will have agreed on the details (price, delivery, conditions, etc). General Suman adds: 'I think it was a master stroke by Modi. There will be no bribes and no middlemen. Further, it will be for the French government to negotiate price with the manufacturers and deliver the planes to India. Most importantly, the deal will carry the sovereign guarantee of the French government.'
As for HAL, the situation is complicated, and everyone agrees that it would have not been possible to build 108 jets in Bengaluru in the required time delays.
A couple years ago, Wing Commander I M Chopra, a former HAL chairman, explained to me one of the many difficulties: 'HAL is a vertically integrated company. Practically every item is made in-house, ranging from accessories, avionics, and engines to aircraft. It is a management nightmare. No company in the world attempts such vertical integration. About 60, 70 per cent of a Boeing aircraft is made by subcontractors. When I tried to get engine fuel pump components for the Jaguar made by MICO, Bengaluru (a Bosch subsidiary), it was a non-starter because we needed manufacturing tolerance of five microns and MICO had experience of working with 25 microns.'
'I think now, 20 years later, it would be possible to induce the private sector to set up high-tech units for building accessories etc,' Chopra added. 'It should be possible also to subcontract high technology work as I believe a few companies have set up machining centres with very modern CNC machines. Such companies have started taking up defence sector work. All of us are interested in indigenisation but there are difficulties to achieve it in high technology items.'
Under the present Defence Procurement Procedure, it would have been a nightmare, and a long, long one at that, to build 108 Rafales in India. Modi realised this and took the wise decision, though it is a definitive setback for his favourite 'Make in India' scheme.
Interestingly, recently, Xinhua commented on the purchase of the Rafales by India. The Chinese news agency wrote: 'The fighter established its reputation with airstrikes against targets in Libya in 2011 when it proved capable of carrying out a mission lasting a total of nine hours and 35 minutes with an in-flight refueling. In 2013, the fighter's twin engines proved they could withstand the heat of the Sahara when France attacked rebel camps in eastern Mali. The aircraft has also been outstanding in reconnaissance and precision bombing in Iraq, where it is one of the main aircraft used in airstrikes against Islamic State.'
'The aircraft's aerodynamic design, avionics and engines are superior to its Chinese counterpart, the Chengdu J-10, which has entered service with the PLA,' Xinhua admitted, to conclude that the Rafale also has 'the capacity to carry the ASMP-A, a cruise missile that can be fired as a warning shot before a nuclear strike. Both India and Pakistan are nuclear powers, but the means to deploy nuclear weapons is crucial in establishing a credible deterrent.'
Congress leaders should not forget this either.
Posted by Claude Arpi at 7:43 AM