Latest news on the Brahmaputra

Several times on this blog, I mentioned the string of 5 or 6 dams planned by China on the Yarlung Tsangpo (Brahmaputra).
According to the 9th report of the Inter-Ministerial Expert Group: "Jiacha could be the next hydroelectric project on the mainstream of Brahmaputra River. It may be followed by hydroelectric projects at Lengda, Zhongda, Langzhen, where dam related peripheral infrastructural activity (including 4 new bridges) has gathered speed. Dagu and Jiexu projects, which are also on the main course of Brahmaputra River, along with Nangxian project may see considerable development activity in future."
The report also apparently mentions that no instance of water diversion activities is discerned on the main course of the river and its tributaries.
This is obvious because if a diversion is ever undertaken, it will be 200 or 300 km upstream. Further a project of such pharahonic dimension, will take 2 or 3 decades to be completed and will have to be incorporated in a Five-Year Plan. It is not the case today.
The fact that "China is carrying out series of cascading ROR projects in the· middle reaches of Brahmaputra, the same may be replicated in the Great Bend Area as a viable alternative to a single mega project", is an interesting hypothesis, which makes sense, technically and strategically.
More than 2 years ago, I wrote about opening of the tunnel to Metok (Motuo in Chinese) as the turning point of the proposed mega project(s).
In an earlier posting, I also mentioned an interview of Dorji Wangdark, the deputy head of Metok County, a delegate to the Regional People's Congress. He thus described his native village: "Metok County has a typical sub-tropical climate, which brings plenty of rainfall and spring-like days all year round, thus, it’s suitable for agriculture and animal husbandry. Metok abounds with rice, millet, bananas and many other grains and fruits, all of which, especially bananas, can be processed and pushed to market.”
Dorji Wangdark also praised Beijing for having brought a road to his border village: "great chances have been brought to Metok since the highway linking Bomi County and Metok opened. But part of the highway, about five kilometers in high altitude, is easy to get snowed up in winter, so the traffic will be held up then."
Wangdark's proposal to the Congress was to improve the maintenance of Metok highway "to accelerate economic development of Metok County".
A cascade of large dams will certainly 'accelerate' the 'development of the area. The tunnel was the key; the gate is now opened. 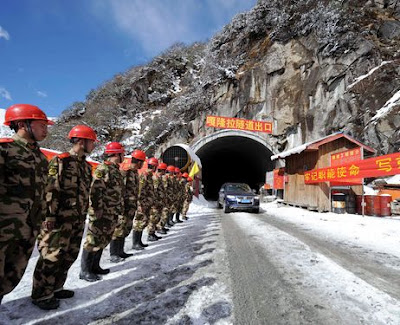 Latest meeting of Committee of Secretaries: Govt of India pushes enviable hydro projects in North East Without due process
South Asia Network on Dams, Rivers & People
April 11, 2013
In a recently held meeting, the Committee of Secretaries have pushed for large hydro power projects in Arunachal Pradesh. As the agitation against the under construction 2000 MW Subansiri Lower HEP on Arunchal Pradesh border has shown any such move, without credible, independent and comprehensive options assessment, social and environmental impact assessment at project and basin level in a transparent and democratic way would prove to be disastrous not just from social and environment point of view, but also from economic aspects. Hurrying through such projects in the name of establishing prior use rights in the name of Chinese projects in Brahmaputra basin would not be helpful. The fact that the river and its ecology are in use by the people of Arunachal Pradesh, Assam, other North East and east India states, Bhutan and Bangladesh should be sufficient if prior use was indeed a tenable argument in international context.
Some new facts that have come to light from the CoS meet include:

Latest updates on this issue from http://www.energylineindia.com/

The observations of the 9th report of the Inter-Ministerial Expert Group (IMEG), were discussed during the course of the meeting. There has been an increase of three project sites on the mighty river since IMEG’s last report, prepared a few months earlier. A total of 39 Rune of the River projects/sites are now present on Brahmaputra and its tributaries.
Dam related peripheral infrastructural activity has gathered speed at Lengda, Zhongda and Langzhen, which are on the main course of Siang or Yarlung Tsangpo as it is called in Tibet. The Bome-Medog road which passes through the Great Bend Area is also being upgraded. The Joint Secretary, Ministry of External Affairs said that keeping in mind China’s bad track record to resolve water disputes, he was of the opinion that India should cooperate with other countries facing similar issues with China.
This report suggests that no instance of water diversion activities is discerned on the main course of the river and its tributaries.
Jiacha could be the next hydroelectric project on the mainstream of Brahmaputra River. It may be followed by hydroelectric projects at Lengda, Zhongda, Langzhen, where dam related peripheral infrastructural activity (including 4 new bridges) has gathered speed.
Dagu and Jiexu projects, which are also on the main course of Brahmaputra River, along with Nangxian project may see considerable development activity in future.
The China is carrying out series of cascading ROR projects in the· middle reaches of Brahmaputra, the same may be replicated in the Great Bend Area as a viable alternative to a single mega project and this needs further monitoring.
The CoS has directed the Technical Expert Group (TEG) to submit its action plan for establishing India’s user right within a month’s time. Cabinet Secretary directed TEG to submit a blueprint for action with indicative time lines within a month. CoS has recommended Additional Secretary, Ministry of Power to chair the TEG. Notably, the TEG along with other standing groups like IMEG, will continue to submit their six monthly reports.
Unfortunately, none of the reports of the TEG or IMEG are in public domain, nor are they available under RTI Act. The people of north east are kept in complete darkness about the decisions these officials take.
About the projects in the NE India, the CoS meeting noted:
Special Secretary, Water Resources, stated that 92 HEPs (above 25 MW) with aggregate capacity of 36,272.5 MW have been allotted of which about 20 are at some progressive stage of development.
While for 11 HEPs, aggregate capacity of 8,510 MW, the detail project reports (DPRs) have been submitted to CEA for examination, 9 projects worth 10,570 MW have been concurred by CEA.
In the case of Pashighat (2700MW) project, Techno Economic Clearance has been received and public hearing is scheduled next month.
Indeed as SANDRP analysis of functioning of EAC shows, the Expert Approval Committee has said yes to the largest of projects from Arunachal Pradesh.
An important agenda of the CoS meeting was to assess the progress of the measures suggested by the committee in its 4th meeting held on April 26, 2011. The committee had directed a Joint Steering Committee consisting of representatives from NHPC and Assam government to end the long standing deadlock at the 2,000 MW Subansiri HEP. Notably, the Joint Steering Committee has submitted its report in July 2012. In response to the CoS decision that Ministry of External Affairs (MEA) should firm up views on the modalities of initiating a more informed public debate on the issue of the Brahmaputra water diversion, MEA and MoWR have formed a joint mechanism to pursue the same. An FAQ has also been prepared on the subject to disseminate awareness. Apart from this, MoWR has initiated action on the decision of the CoS to hold informal discussion between concerned ministries for constructing multipurpose projects in Arunachal Pradesh. An inter-ministerial informal discussion was held in October 2011. An outcome of the meeting was that discussion of rehabilitation, an issue hampering many projects, should be project specific. Further, the Planning Commission has formed an Expert Panel to take up the sub-basin wise Environmental Impact Assessment (EIA) study under the chair of Chairman CWC which will submit its report this month.
Many of these actions of CoS and other related bodies clearly lack credibility. The Central Water Commission itself largely acts like a lobby for big dams in India and it is never known to have taken any credible steps for environment or EIA. Under the circumstances, the sub basin wise study that is expected from CWC would not have any credibility.
Posted by Claude Arpi