A fable of blood and bribes? 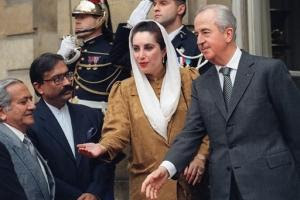 No French scriptwriter could have dreamed of such a great script for the Cannes Festival. Even Bollywood could probably not have thought of it.

Flashback: May 9, 2002. It is early morning for the guests of the five-star Oberoi Hotel in Karachi. But some white men are not here for tourism, they have come on a mission. They will provide expertise for a top secret project, building a submarine for the State of Pakistan.
A minibus stops in front of the hotel. Eleven French engineers and 3 Pakistani staff board the vehicle which is to take them to a dockyard. The French are working for the Direction des Constructions Navales (DCN, Direction for Naval Constructions), an undertaking of the French Ministry of Defense.
A Toyota Corolla (1976 make) approaches the bus and in a fraction of second explodes. All the French engineers (and their Pakistani colleagues) are killed. Fourteen by-passers and hotel staff are badly wounded.
The kamikaze attack deeply shocks the French public; it is the first time that French citizens are directly targeted after September 11, 2001. Terrorism becomes suddenly concrete. It is always the case when the skin of the charred bodies retrieved by the rescuers is white.
The French media and the French government immediately suspect the infamous Al Qaeda network. Al Qaeda is a practical concept: it is so nebulous that everything and anything can be attributed to it. Just what the media needs. The French Chief of Army Staff, General Jean Pierre Kelche goes on air to speak about ‘a non-negligible possibility’ of the involvement of Osama bin Laden and his Al Qaeda group.
It was simple: the French Air Force had participated in the bombing of Tora Bora where bin Laden was hiding a few months earlier: the elusive Saudi had now decided to take revenge.
In Pakistan, everyone remembers the 1971 humiliating defeat against ‘expansionist neighbour’ India. For Pakistani leaders, the only solution to change the past is to arm Pakistan to such an extent that New Delhi remains in a position of military inferiority.
In 1994, Prime Minister Benazir Bhutto is not different from the previous General-Dictator Zia-ul-Haq or her own father who ruled the country two decades earlier. The leadership in Islamabad has to remain ahead of the enemy no 1, New Delhi.
On September 1994, Benazir’s government signs a 162-page very secret contract with the DCN to supply to the Pakistan Navy three Agosta submarines (far superior to the Russian ones then used by the Indian Navy).
Many meetings are said to be held in the Prince of Wales Hotel in Paris where several professional arm dealers such as Ziad Takieddine and Ali ben Moussalam are often seen with Emmanuel Aris, the Vice-President of the DCN-International and Renaud Donnedieu de Vabres, then advisor to the minister of defense François Léotard.
The 825-million euros contract is for 3 Agosta 90B sub-marines, one to be manufactured in France in Cherbourg shipyard, one assembled in Pakistan and a third one entirely built in Pakistan (the French engineers and staff were working on the third one in Karachi).
Coincidentally, the contract is signed after tough financial bargaining when the French presidential election race begins.
The battle for Mitterrand’s succession rages.
Within the RPR, the Gaullist party, Jacques Chirac and Edouart Balladur, two old friends of 30 years try their best to be elected.
But let us comeback for a moment to the terrorist attack. Suspicion points towards the Islamic fundamentalists, especially when persons belonging to the Harkat ul Mujhaideen al-Alami, a terrorist group involved in Kashmir are arrested On December 3in Pakistan.
However their leader Asif Zaheer’s declarations remain vague. According to the Pakistani officer in charge of the inquiry, Asif Zaheer admitts during the inquiries that he himself fixed the explosive in the car used for the attack, he was to suppose to be the kamikaze, but now affirms that American engineers and not French were the target of the attack. This did not make too much sense, though in July 2002, two terrorists Mohamed Imran Bhai et Mohamed Hanif, also belonging to the Harkat are arrested after the attack on the US Consulate in Karachi and tell the police that they knew about the Oberoi operation. They add that they had refused to participate. Later someone else was assigned the job, they tell the police. Finally Asif Zaheer and Mohammed Rizwan (and a third terrorist Mohammed Soham still absconding) are found guilty. They are sentenced to death in June 2003. The file seems closed as far as the Pakistani authorities are concerned.
But in May 2009, after an appeal, all the ‘overwhelming’ proofs against Asif Zaheer and Mohammed Rizwan are found to be vague; they are discharged. The Prosecution is told that they have not given sufficient proof to remove all doubt from the judge’s mind. The ‘terrorists’ are however not freed, being accused in several other cases. In January 2007, the French famous anti-terrorist judge, Jean-Louis Bruguière issues an international arrest warrant against Abdul Saham, now designated as no 4 in the Al Qaeda hierarchy. But no cooperation is received from the Pakistani authorities.
The script should have ended at that point of the story, but it would have been dull and the families of the victims would have remained frustrated.
Suddenly sometimes in 2008, the affair rebounds. During the search of the office of one of the managers of the DCNS (ex-DCN), the police finds an interesting rapport, code-named ‘Nautilus’, though the search had nothing to do with the attack in Karachi. It is related to some commissions paid during an arm deal, a routine affair in other words.
As it mentions the 2002 Karachi attack, the Nautilus report is sent to Justice Marc Trevidic who deals with the case.
According to the weekly Le Point, the report is explicit: “After several contacts, in Europe as well as in Pakistan, we came to the conclusion that the attack in Karachi has been carried out with some complicity inside the [Pakistani] Army… The [Pakistani] military personnel used the Islamic group to achieve the desired results, but [the affair] has a financial angle”. The document speaks of unpaid commissions following the sales of the three subs.
According to the Nautilus, different commissions would have been promised to different middlemen and the highest Pakistani authorities (Benazir Bhutto was then Prime Minister and her husband was known as Mr. 10%). For example on June 30, 1994, Emmanuel Aris signs an agreement with Mercor, a Panama society represented by Ziad Takieddine offering him 4 % of the contract for his services.
The Nautilus report also speaks of retro-commission which would have come back to France and would have helped to finance the campaign of a candidate. That is why, Jacques Chirac, once elected President in 1995 decided to “dry the hidden financial networks” of French politicians and stop the payment of the commissions (It would be done in 1996).
His former companion and looser in the elections, Balladur, who was Prime Minister at the time of the signature of the contract is targeted.
After meeting anti-terrorist judges Marc Trévidic and Yves Jannier, the advocate of the families of the victims, Olivier Morice declared bluntly: “The Al Qaeda lead has been completely abandoned [by the French judge]. The attack seems to be linked to the stoppage of payment of commissions”.
The script has a super-casting from the French side as well the Pakistani side where the present Pakistani President Asif Ali Zardari and the former Navy Chief Mansur ul-Haq are cited (the latter was sentenced to accepting $ 7 million ‘thank-you gift’ for his collaboration with the French). According to the Nautilus, Zardari “used this type of arm deal to get funds to finance Islamic guerilla.” It is also said that he was close to Takieddine.
The weekly Le Point adds that with the help of the ISI, the objective of the Pakistan leadership was to destabilize India through a proxy war in Kashmir (we knew this!).
The French secret services, the DST (Direction for the Surveillance of the Territory) and DGSE (Direction General of External Security) had known from the start that the attack was not ‘Islamic’. For example, the explosive (TNT) used had a ‘military’ origin and the attack was not claimed by any of the terrorist groups, which is their usual practice after murderous attacks.
It appears that the US secret services were also aware. One Randall Bennett from the US embassy in Pakistan would have informed the French Prosecutor Michel Debacq that the attack was linked to the submarine deal.
Though President Sarkozy termed the disclosure a ‘grotesque fable’, the script is too good for the French press to be easily dropped. Especially when so many of the actors are still around. Zardari is President of Pakistan, Sarkozy was Budget Minister in Balladur’s government and as such officially authorized the creation by the DCN of a special structure in Luxembourg for the transit of ‘export commissions’. This, of course, did not legalize the retro-commissions or any payment to French politicians, but ’officialized’ the payment of commissions (The law has changed since then).
Balladur has denied any wrong doings and for the time being Chirac has kept quiet, though Charles Millon, Chriac’s defense minister admitted to the weekly Paris Match on June 24 having blocked in 1995 “commissions which could have been the source of retro-commissions”..
The most thrilling details cited in the Nautilus whose author has been identified as Claude Thévenet, a former agent of the DST, French intelligence agency, is the revenge of the French. An Internet information site Mediapart spoke to Thevenet. The DGSE would have organized a special operation with French commandos (Service Action), specialized in clandestine operations outside the French territory. One Pakistani officer would have been killed and three admirals would have ended with broken knees. “On ne fait pas chanter la France!” (One does not blackmail France!). Karachi had tried to blackmail the French government refusing to pay the promised commissions.
Is all this ‘fable’, a Bollywood script or a sad reality? Only the judges will be able to tell us, hopefully soon!
In May 2002, I had thus concluded an article written on the same subject: “There is a character of Molière, the famous 17th century French playwright who keeps repeating throughout the play Mais que diable allait-il donc faire dans cette galère? (It can be translated as 'But what the hell were they doing in this galley?' though 'galère' has two meanings in French, one is 'galley', the other one 'mess', which is the same for our purpose.). It is a question that the new French government of Jacques Chirac -- which was elected on a very high moral ground with 82 per cent of the votes, should be asking itself.”
It remains an unanswered question. Paris probably thought that their allies in Islamabad were going to help to combat terrorism with Agosta subs. Does Sarkozy’s government think differently. Not sure.
Posted by Claude Arpi