Have the Serfs been Emancipated? 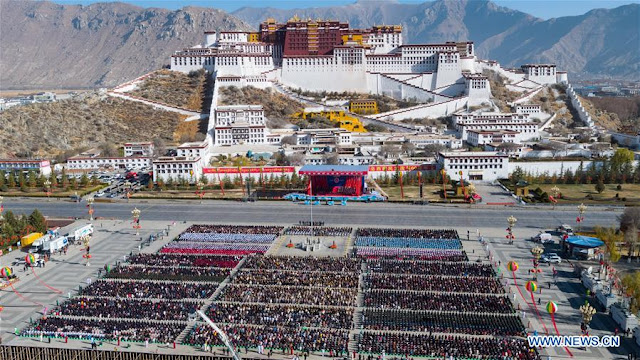 On March 28, China celebrated the 60th anniversary of the Introduction of the Reforms in Tibet and the Serfs’ Emancipation Day.
Sixty years ago, following an uprising of the entire population, the Tibetan capital witnessed the massacre of thousands of Tibetans …Communist reforms could finally be introduced.
Last week, the Chinese media reported: “Representatives from various ethnic groups and walks of life gathered in the Potala Palace square in Lhasa to celebrate the 60th anniversary of the campaign of democratic reform in Tibet.”
The colonial mindset is immediately apparent: “various ethnic groups”, as if Tibetans belonged to different ethnic groups.
Of course, today the Tibetans are a minority in their native land, but the media should have written that “Tibetans and Hans have gathered” near the Potala.

Who is the Boss?
Another telling detail, the report started thus: “At 10 a.m., Losang Jamcan, director of the Standing Committee of the Tibet Autonomous Regional People's Congress, declared the opening of the celebration meeting in both Tibetan and Mandarin, which was followed by a solemn ceremony of raising the national flag and singing the national anthem.”
Lobsang Gyaltsen (the correct spelling of his name), is the Chairman of the People’s Congress of the Tibetan Autonomous Region (TAR) and the TAR’s Deputy Secretary; he is also a member of the CCP’s Central Committee
What is strange is that Lobsang Gyaltsen spoke before the Party’s Secretary (Wu Jingjie), though the Communist protocol is always extremely strict.
But after having proclaimed that sixty years ago, the Tibetan people have become their own masters, it would have not looked nice, if the Party Secretary, always from the Han nationality, would have spoken before a Tibetan.
A small adjustment of the protocol was necessary for the grand show.
Incidentally, not a single Tibetan has ever made it as Party Secretary in Tibet.
Why? Simply, because despite the propaganda, Beijing does not trust the Tibetans.
Look at the list of Party Secretary in Tibet (the most famous is President Hu Jintao):

The Function in Lhasa
Let us come back to the report of the function.
Xinhua explained: “In March 1959, the Chinese central government dissolved the aristocratic local government of Tibet and freed more than 1 million serfs, making them the masters of the nation and society.”
In several previous posts, I have shown that the so-called Emancipation of the Serfs is pure history rewriting of the events of 1959.
Wu Yingjie, the Party Chief, followed his deputy on the rostrum.
He solemnly declared: “Tibet has made historic achievements and undergone tremendous changes since the democratic reform that started 60 years ago,” and added: “The democratic reform completely obliterated the feudal serfdom of theocracy, changed the production relations of the old Tibet, smashed the shackles of feudal spirit and culture and freed local people from feudal political oppression.”
Wu asserted: “The democratic reform is a major historic event in Tibet's development and human rights advancement.”
I wonder if Wu really know what happened at the end the 1950s in Tibet?

The Reforms in Tibet
Interestingly, in January 1957, while on a visit to India, Zhou Enlai, the Chinese Premier had long discussions with Prime Minister Nehru on the introduction of the so-called reforms. It was decided to postpone them at least for six or seven years.
In the course of the conversation with the Indian Prime Minister, Zhou pointed a finger at non-existing foreigners in Lhasa: “those bent on trouble are preparing for an incident in Lhasa. These people have some armed forces. Some three temples in Lhasa have also armed forces and they want to create an incident with the People's Liberation Army there. If it happened, then there would be bloodshed.”
Nehru did not react.
Is it not strange than two years later, the Tibetan resistance was centered around three ‘temples’ or religious places (Ramoche, Norbulinka and Chakpori)?
Did Zhou already know what would happen in March 1959?
Although there was no ‘foreigner’ in Lhasa, except for the Indian staff of the Consulate General, the bloodshed indeed took place in March 1959; it helped Mao to firmly consolidate the position of the Communist regime, which continues to control the restive nation with an iron hand.

The Communist Party views
According to historian Melvyn Goldstein, the issue of the revolt was discussed in Beijing by the Party leadership as early as 1957: “If Tibetans revolted, Mao asserted clearly that he would use the PLA to destroy the rebels, wipe out the traditional manorial estate system, end the Tibetan ‘local’ government, and quickly implement forced reforms and create a socialist Tibet under direct control by the CCP.”
Goldstein thought that it was for Mao “an alternative path to success since it would enable the CCP to end the traditional system and ‘liberate’ the Tibetan masses much sooner than under the gradualist policy. Mao therefore presented his Tibet policy as a no-lose strategy for China.”
It is a matter of debate if it was an ‘alternative’ or not, but on May 14, 1957, a cable was sent by the CCP’s Central Committee to the Chinese generals in Lhasa.
It says: “In today’s Tibet, the separatists are still quite popular, and can still stir up troubles on the issue of reforms. This is not accidental. Rather it has its historical and social causes. Although Tibet became an inseparable part of China a long time ago, it has maintained an independent or semi-independent status in its relations with the motherland…”
This admission is interesting to note.
The note of the Central Committee continued: “The fact that it had achieved long-term independence and semi-independence historically distinguishes Tibet from other minority nationality areas in China. First, this is reflected in Tibetans’ centrifugal tendencies away from China and their distrust of Han Chinese. Not only does this exist widely among the upper classes, but also has a considerable influence among the masses. When the imperialist forces penetrated into Tibet toward the end of the 19th century, they instigated distrust between Tibet and China, nurtured pro-independence forces and created an impetus for separation, all of which exacerbated the Tibetans’ centrifugal tendencies away from the motherland.”
It mentioned serfdom and feudal rule in Tibet “[which] have remained intact until now. The upper classes still retain the ethnic banner and the religious banner, and they can still use these banners to influence the masses in order to maintain the old system and rule that is harmful for the development of the Tibetans. This is the reality we are facing. Besides the issues with the upper classes, we also have the issues of the masses.”
The cable continued in the same vein. Was force an alternative? the Central Committee thought: “If we use force, it very likely will create a situation in which not only the majority of the elite will oppose us but also the separatists’ conspiracies will succeed, the leftists will be isolated, and a considerable portion of the working class under the elite’s influence and control will follow them to oppose us. If this situation occurs, either it will force us to stop reforms and place us in a passive political situation, or we will need to start a war to mobilize the masses and implement reforms. This is the last resort in nationality areas…”
The conclusion of the Central Committee was: “If imperialists and traitors start an armed rebellion, that is something different; and then we will have to use armed forces to suppress the rebellion. The Central Committee has made repeated instructions about this. …Having considered the historical and current situations in Tibet, the Central Committee has decided that we will not carry out democratic reforms in Tibet for at least six years, or even longer.”
This followed the assurance given to Jawaharlal Nehru by Zhou Enlai in January 1957. It was the condition for the Dalai Lama, then in India, to return to Tibet and not seek asylum in India or America.

The events of 1959
In January 1959, according to Goldstein, Mao and the Central Committee realized that “the Tibetan insurgency had crossed the threshold from local uprisings to a full-scale revolt. The PLA had to be used to control the rebellion.”
On January 22, 1959, Mao wrote: “The next few years in Tibet will be a period when our enemy and we both will try to win over the masses, and both will try to reinforce their military power. After a few years, three or four years, five or six years, even seven or eight years, a big battle will definitely come, so we can solve the problems thoroughly. In the past, the rulers of Tibet only had a weak army. Now they have an armed force of 10,000 with high morale. This is a serious problem for us. However, it does not mean it is a bad thing. On the contrary, it is good, since there is a possibility for us to solve the problem militarily."
The 'great battle' came earlier than expected.
Mao's views were: "We must do the following: 1) we must win over the masses during the next few years, and isolate the reactionaries; 2) train our army to be strong fighters. These two things should be done during our struggle with the armed rebels.” [Quoted by Goldstein].

The Decision
Two days later, the Central Committee told the Chinese leadership in Tibet: “the armed uprisings have expanded to the next level. …The uprisings will continue to expand unless we have a one-time decisive battle. Then and only then will the problem be resolved thoroughly.”
It was indeed resolved thoroughly, the ‘reforms’ were imposed in a bloodshed, and the serfs were 'emancipated', the Communist way...

Today, the tragic episode is repacked by Beijing in a White Paper, showing how happy the Tibetans are.
President Xi Jinping should hold a referendum and ask the opinion of the Tibetan masses if they are happy or not.
I will be interested to see the results. 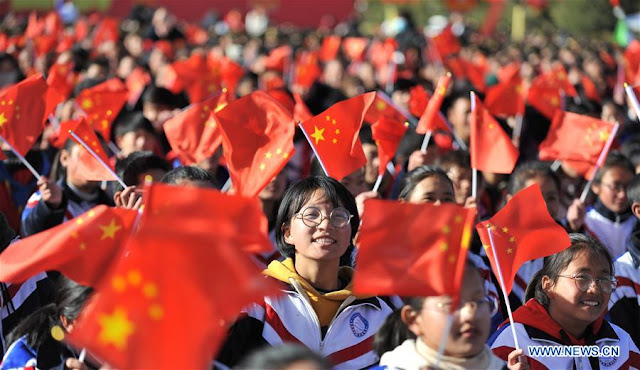 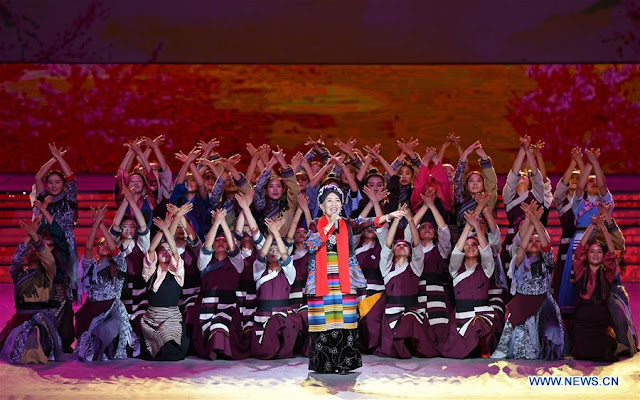 Claude Arpi,
I am a great fan of yours. I don't think I have missed a single article of yours published in Pioneer.
India wants journalists of your Calibre and investigative research.
Your articles provide a strategic view of India China.
Vikrant Nath