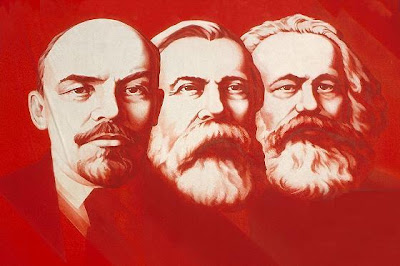 Though Beijing is trying hard to promote Buddhism abroad (particularly in Lumbini, Nepal or in Nalanda), the leadership in Beijing does not seem aware of the Words of the Buddha: "As the wise test gold by burning, cutting and rubbing it on a piece of touchstone, so are you to accept my words only after examining them and not merely out of regard for me."
On the contrary, Beijing is trying to force Marxist ideology in the throats of the Chinese people without "burning, cutting and rubbing it on a piece of touchstone".
This article in the Red Flag Manuscript affirms: "We must fully recognize the extreme importance of ideology work, always adhere to Marxism’s guiding position in the ideology field, always remain clear and firm in our thinking and political activities, and prevent influence and interference from all kinds of wrong ideas."
But 'ideology' will not solve the problems of China.
The Communist regime has been trying for the past 60 years to use 'ideology' to give a direction to the Middle Kingdom, but China has only been successful in the fields where she was able to put ideology behind.
Ideology has never helped to solve the practical problems of the masses:  last year only China has witnessed more than 1,20,000 riots/unrests.
The Chinese people want something more concrete and more human than ideology.
In the meantime, it was confirmed that two Tibetan died after security forces opened fire on protesters on 24 January at Serta County in Kardze Tibetan Autonomous Prefecture (Sichuan Province).
Some 10 Tibetans were seriously injured and some 40 others have been arrested. Over 300 Tibetans gathered and shouted slogans calling for the return of the Dalai Lama and Tibetan freedom. Later, a large number of security forces arrived on the scene and started beating and kicking the protesters.
Let us hope that the new leadership, to be chosen at the end of the year, will use less ideology and repression, but more compassion.

Red Flag Manuscript: Watch Out for the West’s Infiltration and Sabotage in the Arena of Ideology

[Editor’s Note: Red Flag Manuscript published an article on the importance of safeguarding China’s ideology. [1] The author, Zheng Weiping, Director of the Political Department of Guangzhou Military Region, argued that “It has always been the core mission of each country and political (ruling) party to fight for the discourse power in ideology and be proactive in safeguarding the nation’s ideology.” Zheng stated that China should adhere to its Marxist ideology and socialist path and be fully alert to the West’s infiltration and attempts to overthrow the Chinese Communist Party’s (CCP’s) leadership. The following is an excerpt from the article.]

Ideology is an important issue that is directly related to core national interests, national security, and development. It has always been the core mission of each country and political (ruling) party to fight for the discourse power in ideology and be proactive in safeguarding the nation’s ideology. Given the current complex international and domestic situation, a correct understanding and a proper response to the challenges in the arena of ideology are major practical issues for us.

I. Consciously Adhere to the Marxist Ideology

The Marxist theory of ideology is a sharp weapon for us to use in our ideology work. To have a comprehensive and systematic understanding of the Marxist theory of ideology, one must deeply comprehend its basic ideas: First, the mode of production of material determines the nature of ideology. ... Second, ideology is based on an interpretation of the real world. Politics, law, morality, art, philosophy, religion, and other ideas form the ideological superstructure which includes ideals, beliefs, values, and other important spiritual notions. These, in turn, affect and restrict people's values and spiritual life. Third, class is the essential characteristic of ideology. … Fourth, ideology is the thought system of the dominant social class. ... Fifth, ideology must not only interpret the world, but also transform the world. ... Sixth, the core value system is the soul of ideology. Ideologies are built around the core value system of a social class and social group. … The battles among ideologies are basically clashes between the core value systems. These Marxist concepts of ideology are the guidelines for our work in the arena of ideology.

Marxism is the soul of socialist ideology with Chinese characteristics. ...

The national spirit with patriotism as its core and the spirit of the times with reform and innovation as their core are the essence of the socialist ideology with Chinese characteristics.

III. Deeply Recognize the Complex Situation in the Arena of Ideology

First, in the context of economic globalization, the struggle between ideologies has become more intense and complex. Specific manifestations are:

3) The ideological struggle has entered into more areas. It is not limited to the ideological and cultural fields, but also permeates politics, economics, technology, the military, international relations, and other fields. It has also become more popular in the areas of culture, academics, and life in general. Ideology’s appearance and essence are more and more separated from each other, but its impact has become more and more lasting and strong.

4) Ideology plays a more obvious role in international strategic battles these days. The U.S.-led Western countries implement their ideological strategy, encouraging and supporting so-called "color revolutions," which are, in fact, the Western-styled "democratic reform" to change other countries. On the surface, the struggle between maintaining and changing the regime in a targeted country looks like non-violent revolution and political action carried out in the streets by the locals, but actually it is the West’s ideological hegemony that plays a leading role behind it. The recent "Rose Revolution," "Orange Revolution," and "Jasmine Revolution" are examples.

Second, Western countries have strengthened their efforts to infiltrate and sabotage our ideology. The U.S.-led Western countries do not want to see a strong socialist China. They attempt to use their Westernization and separation strategy to drastically change China, just as they did to the Soviet Union and Eastern Europe. They have deliberately intensified political pressure, stepped up economic development constraints, continued to demonize us, and ideologically and culturally infiltrated us, using more diverse means and higher technology. It is more and more difficult for us to fend them off and respond to them.

For example, they push ideological hegemony under the banner of Western freedom, democracy, and human rights; they promote the multi-party system and a separation of powers; they attack our political system, maliciously stir up discussions of social hot issues, incite separation using ethnic and religious issues, support "dissidents" to challenge our political bottom line, deny the party's leadership in the name of "restoring history" and "reforming by reflecting,” strengthen ideological and cultural infiltration, and sabotage our country by using their advantage in network technology. Overall, they effect ideological infiltration and sabotage by taking capitalist values as the core ideological export content, stirring up discussions on sensitive issues, penetrating to and competing for the grassroots level, using "dissidents" and “opinion leaders" as their supporters, forging collusion between internal and external forces, targeting the military, and taking the Internet and mobile phones as a key battlefield.

The reality shows that the complexity and sharp struggle in the ideological field do not change based on our will. The struggle is a contest between the socialist and capitalist value systems. The hostile forces’ fundamental goal is to overthrow the CCP’s leadership and subvert our country's socialist system.

Third, one cannot ignore the impact that the complicated struggle in the ideological field has on our society.

Ideology work is related to the Party’s and the country’s overall work, the steady development of socialism with Chinese characteristics, social harmony, and the stability of the nation. We must fully recognize the extreme importance of ideology work, always adhere to Marxism’s guiding position in the ideology field, always remain clear and firm in our thinking and political activities, and prevent influence and interference from all kinds of wrong ideas. At present, we should utilize mainstream media, the Internet, mobile phones, and other new media to build a modern communications system with wide coverage and advanced technology, strengthen and improve our leadership over ideology work, and improve our ability to establish ideology.