A letter from the Dalai Lama to Mao 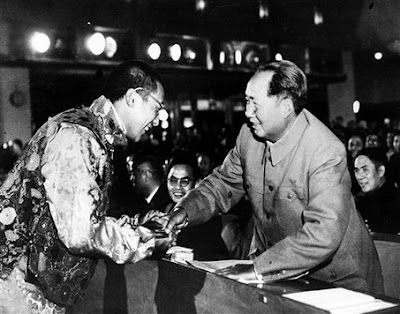 The Chinese media claims that a letter written by the Dalai Lama to Mao Zedong in October 1951, accepting the 17-Point Agreement, has been found in the Chinese archives and is now declassified.
Melvyn C. Goldstein had published this letter some 20 years ago. Considering that the Dalai Lama was 16 year-old at that time, it is doubtful that he was able to master the Communist jargon used in the letter, moreover written in Chinese language.
The letter was most probably 'dictated' to the young Tibetan leader.
I recently questioned the new Tibetan Prime Minister (Kalon Tripa) Dr. Lobsang Sangay about the 17-Point Agreement, he said:


The 17-Point Agreement [through which China pretends to have ‘liberated’ Tibet] was signed in 1951 under duress. The Tibetans had not choice but to sign it. Every year China is still celebrating May 23rd as the ‘Liberation Day’. Their legitimacy is still depends on this document.

But Article 1 says: “Tibet shall return to the Motherland”. If Tibet was always part of China, where does it return from? Tibet was an independent entity, there were no Chinese in Tibet before 1950. Then the Chinese Army entered and said that Tibet ‘joined’ China. In fact, they occupied Tibet. And they still celebrate this as the ‘Liberation’!
Further Article 4 says that “the status of the Dalai Lama and the Kashag will remain the same”. The Dalai Lama and the Kashag are in exile because the Chinese completely violated the Agreement. If China is honest and fair, it should implement that Agreement to begin with, not just celebrate May 23rd as ‘Liberation Day’. They should restore the status and power of the Dalai Lama and the Kashag. They can’t use this document to legitimize their presence in Tibet. They should also remember what Mao said: “wherever they will be aggression, they will be a resistance”. We have seen the resistance in 2008.

That is the point, Communist China has not even respected the Agreement.

Copy of letter written by 14th Dalai Lama to Chairman Mao declassified
2011-06-01
China Tibet Online
Mirenda Wu
A copy of letter written by the 14th Dalai Lama to Chairman Mao in October 1951, the year marks the peaceful liberation of Tibet, has been now declassified to the public by the State Archive Administration, the China Daily reported in Beijing on Wednesday.
About 40 percent of the documents held by the State Archive Administration have been opened up to public scrutiny, Yang Dongquan, head of the administration said.
In the letter, the 14th Dalai Lama said that "the local government of Tibet as well as the Tibetan monks and laymen unanimously support this agreement, and will actively assist the People's Liberation Army in Tibet to consolidate national defense, drive imperialist forces out of Tibet and safeguard the unification of the territory and the sovereignty of the motherland."
According to Yang, the materials are useful in recording real history, safeguarding the unification of the territory and informing younger generations.
"In March, 2008, we put on five videos themed on the truth of Tibet on our official website in order to correct people's false and prejudice toward Tibet. The videos were made based on a series of archives kept in our administration including appointing and dismissing officials in Tibet by generations of Chinese Central Government, conferring the titles of the Dalai Lamas and the slave trade before the democratic reform of Tibet," said Yang.
"The videos were reprinted by around 400 websites at home and abroad in both Chinese and English,” he added.
People wanting to look at documents need to show their identification cards and research achievements in a related field along with letters of introduction from their employers if they want to see the declassified materials.
The State Achieves Administration, which was founded in 1954, is responsible for collecting, arranging, preserving and providing access to documents with long-term values.

From "A History of Modern Tibet, 1913–1951 - The Demise of the Lamaist State by Melvyn C. Goldstein published by UNIVERSITY OF CALIFORNIA PRESS
On 24 October, the Dalai Lama sent an official confirmation to Mao Tse-tung. Written in Chinese Communist jargon, this telegram vividly reflects Tibet's new status: "Chairman Mao Tse-tung. At the end of April 1951 there arrived in Peking a special delegate, Kalon Ngabo and four other plenipotentiary representatives sent by the local Tibet government. They held peaceful negotiations with the plenipotentiary delegates appointed by the Central People's Government. The representatives of both sides, on May 23, 1951, signed on a friendly basis an agreement relating to the measures for the peaceful liberation of Tibet. The local government of Tibet, the monks and the entire Tibetan people express their unanimous support for this agreement. Under the leadership of Chairman Mao Tse-tung and of the Central People's Government they are actively helping units of the People's Liberation Army which entered Tibet for the strengthening of the national defences, the driving out of imperialist forces from Tibet and the guaranteeing of the sovereignty of the entire territory of the motherland.

The same source cited Mao's 28 October reply:
Received your telegram of October 24, 1951. I thank you for the efforts you are making to translate into reality the agreement regarding the peaceful liberation of Tibet, and I send you my most sincere greetings.
Tibet had become a part of the People's Republic of China.
[Source: Tass dated 27 October,1951 reported that Xinhua published the above letter. It is also available in the British Foreign Office files FO371/92998, as a clipping]
Posted by Claude Arpi