Sixty Years Ago: The Dalai Lama crosses over to India 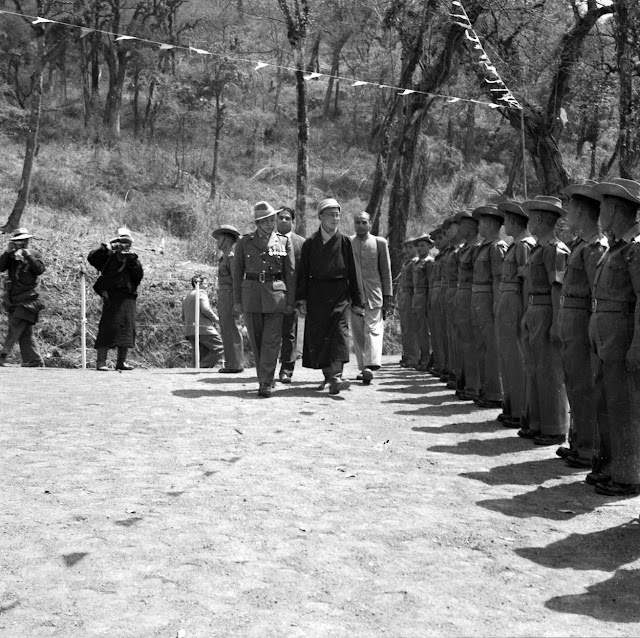 At a time when China says that the reincarnation of the Dalai Lama is not his ‘personal decision’, but that he should follow the ‘Communist Party’s instructions’, it is important to remember the momentous event which took place sixty years ago in the North East Frontier Agency (NEFA), today’s Arunachal Pradesh.
On March 31, 1959, the 14th Dalai Lama of Tibet crossed the Indo-Tibet border at Khenzimane in the NEFA’s Kameng Frontier Division, north of Tawang; a couple of kilometers south, he met a detachment of the Assam Rifles waiting to welcome him at Chuthangmu.
Since then, he has been an honoured guest of India.
Four days earlier, the 24-year-old Tibetan leader had sent a message to Jawaharlal Nehru, the Prime Minister of India: “Ever since Tibet went under the control of Red China and the Tibetan Government lost its powers in 1951, I, my Government officers and citizens have been trying to maintain peace in Tibet, but the Chinese Government has been gradually subduing the Tibetan Government.
He further stated: “The Tibetans have great love for and faith in Buddhism and their religion is more precious to them than their lives. In order to root out Buddhism, the Chinese published some articles in the press against Lord Buddha’s teachings and circulated them widely. This has created [an] unhappy atmosphere amongst the Tibetans and they have started disliking intensely the Chinese Administration.”
The Dalai Lama told Nehru about the circumstances of his departure: “On March 17 at 4 pm, the Chinese fired two shells in the direction of my residence. They could not do much damage. As our lives were in danger, I and some of my trusted staff managed to escape the same evening at 10 pm.”
The party headed south and reached Lhuntse Dzong, north of the NEFA on March 26, after what has been termed as the Escape of the Century. The Dalai Lama observed: “India and Tibet have had religious relations for thousand years and they are like brothers without any differences;” he then requested Nehru for asylum: “In this critical situation we are entering India via Tsona [last town north of Tawang]. I hope that you will please make necessary arrangements for us in the Indian territory.”
Ever since, India has looked after the Tibetan leader’s welfare. 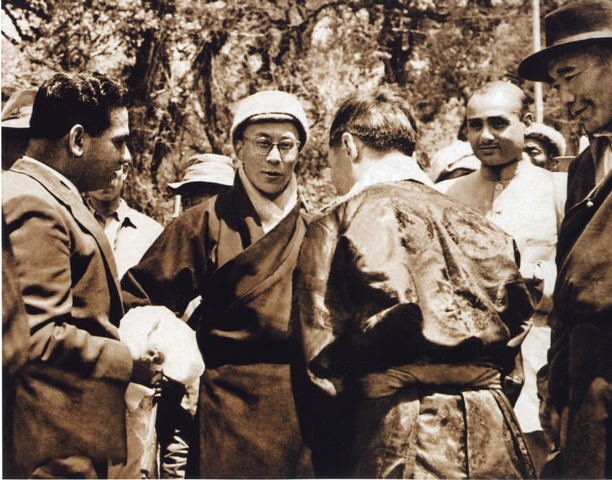 The Arrival in India
On March 27, TS Murty, the Assistant Political Officer was told to rush from his headquarters in Tawang to the border; on March 31 in the morning, he reached Chuthangmu in time to receive the Tibetan Lama.
The Dalai Lama’s advance party, under a junior officer, had already come two days earlier; they had informed the Assam Rifles that the main group consisted of the Dalai Lama, his family, his two tutors and three ministers; they were expected to enter India soon. Indian officials were also told that there was no sign of a Chinese pursuit; the party only needed more porters once they entered India.
A secret report sent to Delhi observed: “At 1400 hours on March 31, the Dalai Lama and his party reached Kenze Mane [Khenzimane] which demarcates the frontier in Chuthangmu area. His Holiness was riding a yak and was received by the Assistant Political Officer, Tawang. They proceeded to the checkpost without halting at the frontier.”
It was agreed that all porters, who had come from Tibet, would be sent back and that porterage arrangements thereafter would be made by the Government of India; the report continued: “It was also agreed that all pistols and revolvers, except those in possession of the Dalai Lama, his family and ministers (excluding their servants), and all rifles would be handed over to us for safe custody and that these could be collected at the frontier by those members of the body guard who were to return to Tibet after escorting the Dalai Lama to the plains or that alternatively, we would keep that in our custody and obtain disposal orders from the Government.” It is doubtful if the Dalai Lama himself had a pistol.
A reply from the Prime Minister to the Dalai Lama’s message was received through KL Mehta, Advisor to the Government of Assam on April 3: “I received Your Holiness' message only yesterday on my return to Delhi. My colleagues and I welcome you and send you greetings on your safe arrival in India. We shall be happy to afford the necessary facilities for you, your family and entourage to reside in India. The people of India who hold you in great veneration will no doubt accord their traditional respect to your person.”
Sixty years later, the veneration remains. 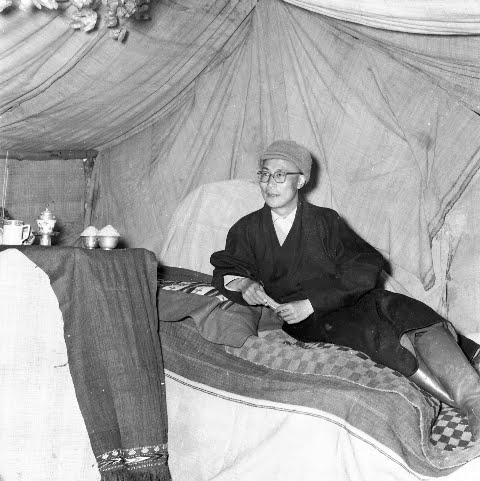 The Dalai Lama’s account
Let us come back a few days earlier.
In his memoirs, Freedom in Exile, the Dalai Lama narrated his last days in Tibet: “From Lhuntse Dzong we passed to the small village of Jhora and from there to the Karpo pass, the last before the border. Just as we were nearing the highest point of the track we received a bad shock. Out of nowhere, an aeroplane appeared and flew directly overhead. It passed quickly - too quickly for anyone to be able to see what markings it had - but not so fast that the people on board could have missed spotting us. This was not a good sign. If it was Chinese, as it probably was, there was a good chance that they now knew where we were. With this information they could return to attack us from the air, against which we had no protection. Whatever the identity of the aircraft, it was a forceful reminder that I was not safe anywhere in Tibet. Any misgivings I had about going into exile vanished with this realisation: India was our only hope.”
As the party was spending its last night in a small village called Mangmang; it suddenly began to rain: “This was on top of a week of appalling weather, which threw blizzards and snow glare at us by turns as we straggled along. We were all exhausted and it was the last thing that we needed, but it continued torrentially throughout the night,” remembered the Dalai Lama.
Though the young leader was very sick, he decided to move on: “I now had the difficult task of saying goodbye to the soldiers and freedom fighters who had escorted me all the way from Lhasa, and who were now about to turn and face the Chinese. There was one official too who decided to remain. He said that he did not think that he could be of much use in India, therefore it would be better to stay and fight. I really admired his determination and courage.”
It is how the Dalai Lama arrived in India sixty years ago: “After bidding these people a tearful farewell, I was helped on to the broad back of a dzomo, for I was still too ill to ride a horse. And it was on this humble form of transport that I left my native land.”
On the back of a yak! 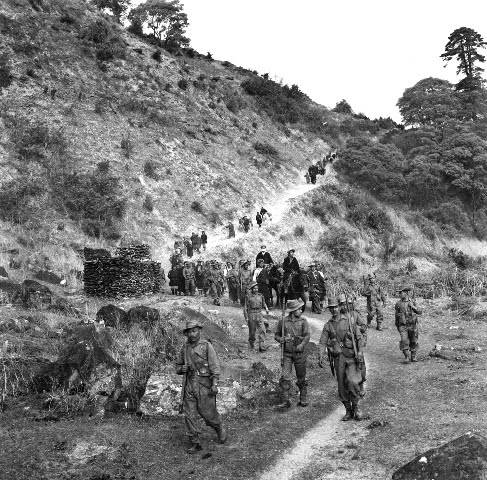 A Report from the Political Officer
Har Mander Singh, the Political Officer (PO) of the Kameng Frontier Division received the Tibetan leader in Lumla, south of the border, mid-way to Tawang.
Har Mander informed Delhi that after crossing to India, the Dalai Lama had moved south, passed the historical Gorsam Stupa, reached Shakti village the next day and Lumla on April 3.
Here the PO had long discussions with the Tibetan officials and the Dalai Lama: “the [Tibetan] Foreign Minister [Thupten Liushar] briefly recounted the circumstances under which the Dalai Lama was forced to leave Tibet. About the relations between China and Tibet, he said: “…The Government of Tibet was, however, in possession of documents refuting Chinese claim of suzerainty over them and in support of theirs being an independent country.”
Liushar said that the Dalai Lama himself had felt that he should work in harmony with the Chinese: “Indeed during his visit to India [in 1956] he was advised by the Indian Prime Minister himself to cooperate with the Chinese in the interest of his country.”
In spite of the Dalai Lama’s effort to accommodate the Chinese viewpoint, “the Chinese interfere in the religious affairs of the Tibetans... They had desecrated several monasteries in Kham Province and had also killed several incarnate Lamas,” wrote the PO.
The Indian officials were informed how the Dalai Lama had decided to escape via the Southern route as the only Chinese garrison (of about 600) on the way was in Tsethang where the Chinese: “were surrounded by the rebel [guerilla] troops and Tibetan Government forces and could not, therefore, interfere with the movement of the party.”
Before moving on to India, the Dalai Lama had established an exile Government in Lhuntse Dzong.
Later, on the way to India, the Tibetans mentioned the aircraft flying over them near Tsona; it could well have been an Indian airplane from Squadron 106, mentioned by Wing Commander ‘Jaggi’ Nath in a recent interview to Rediff.com.
The Tibetan ministers informed the Indian officials that: “The policy of the Chinese was becoming increasingly anti-religious; the masses of Tibet were restive and he was no longer able to make them put up with the Chinese rule; the Chinese had attempted to endanger [the Dalai Lama’s] person; Tibet should be free; his people would fight to win their freedom; he was confident that India’s sympathies are with the Tibetans; the seat of his Government had shifted from Lhasa to Lhuntse Dzong.”
The program of the party was briefly discussed, reported Har Mander Singh: “The Foreign Minister indicated that they might like to stay up to ten days in Tawang. I explained briefly the disadvantages of their prolonged stay in Tawang and said that we could perhaps make them more comfortable in Bomdi La. I made it clear, however that we were prepared to accede to the Dalai Lama’s wishes. The Foreign Minister said that it would be possible to cut down their stay in Tawang to about three days.”
Har Mander Singh assured Liushar that India would provide all facilities for travel beyond Tawang to all persons accompanying the Dalai Lama, but there was danger that stray persons escaping from Tibet may take this opportunity and come in along with the main party. He wanted a full list of persons entering India, as comprehensive and accurate as possible, he said.
During the following weeks, 12,000 refugees would cross the border; the exodus will continue for several years.
The rest is history.