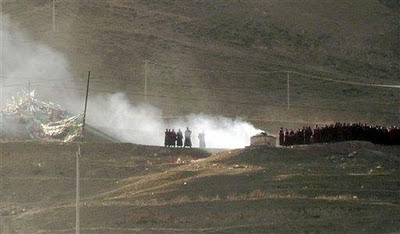 I find this very touching because these people are ready to risk their life to show their devotion to their leader (and to the person that they perceive as the leader of the world).


Thousands rejoice in Tibet as Obama meets Dalai Lama
Phayul
February 18, 2010
By Kalsang Rinchen
Bangalore, February 18 – Thousands of Tibetans took to the streets of Ngaba County today, not in protest but in joy, hours before the much talked about meeting between His Holiness the Dalai Lama and US President Barack Obama. The mournful atmosphere of the Tibetan New Year was replaced by jubilation with people cracking firecrackers in the streets and celebrating.
Tsering, a monk of Kirti monastery in Dharamsala, told phayul that his contacts in Ngaba had seen thousands of Tibetans from nearby villages and townships gather near Ngaba Kirti monastery campus and burn incense in the gigantic incense burner and throw wind-horse prayer flags in the air.
People wandered in the streets and shouted ki ki so so lha gyalo (victory to gods - a slogan Tibetans say after throwing tsampa in the air during the incense burning ritual of purification, tib: Sangsol or lhasol), he said. Amid the chaos, Chinese security forces were alert ensuring that the Tibetans did not take the opportunity of large gathering to hold anti-government protests, Tsering added. Sources have also said that some Chinese police even confiscated firecrackers from Tibetans and extinguished already lit firecrackers.
The Tibetans in Tibet have great hope that the meeting between Obama and His Holiness will bring some positive development to Tibet issue, said Tsering.
At the time of this report going online many monks of Ngaba Kirti monastery were still sitting around the incense burner saying prayers, according to our source.
Celebrations were said to have taken place in several places in Tibet but no reports have come out as yet.
Posted by Claude Arpi

I wish Tibeteans get the freedom from china dictatorship...All The Best...The fire for freedom shall keep burning