Why China is angry with the Puja in Bodh Gaya 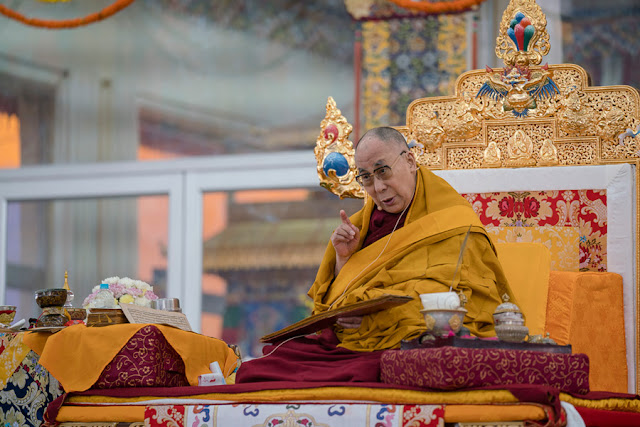 My article  Why China is angry with the Puja in Bodh Gaya appeared in Rediff.com


China's ruling Communist Party has cracked down on Tibetans who planned to attend the Kalachakra Puja in Bodh Gaya.
But the Tibetan people have dared the Communists by listening to the Dalai Lama's sermons on the Internet and sharing videos on social media, says Claude Arpi.

Some say 100,000, others speak of 200,000 devotees, from nearly 90 countries around the world, assembled in Bodh Gaya, Bihar — the place where Gautama Buddha attained enlightenment — to get the blessings of the Dalai Lama, who offered the Kalachakra empowerment.
Soon after the New Year, the Dalai Lama gave the devout crowd preliminary teachings on Buddhist texts such as Shantideva's A Guide to the Bodhisattva's Way of Life.
Though the preparatory teachings took place since January 2, the main puja lasted from January 11 to 13.
It did not amuse China, which became angrier with the Tibetan religious leader. These days, the Communist leadership systematically sees red when the Dalai Lama’s name is mentioned.
It could simply be because all religious activities in the Middle Kingdom are subordinated to the Communist Party’s diktats?

The Chinese Kalachakra
Xi Jinping and his colleagues say that they have nothing against religion; in fact they supported their own Kalachakra in Tibet in July 2016.
Gyalsten Norbu, the boy selected by the Party in doubtful circumstances as the Eleventh Panchen Lama, officiated in Shigatse, the second largest town in Tibet, while for the past 20 years. the boy recognized by the Dalai Lama as the Panchen Lama still languishes under house arrest ‘somewhere’ in China.
At that time, The Global Times, the mouthpiece of the Party reported: “Following strict religious traditions, the ritual lasted from July 21 through July 24. During this time, the Panchen Lama restored statues each morning, and from two o’clock in the afternoon began reading scriptures for the ritual for monks and believers. The Panchen Lama initiated the Kalachakra for more than 426,000 monks and believers during this time.”
The atheist Communist Party, recently greatly knowledgeable in religious affairs, explained: “The Kalachakra ritual is the highest level of rituals in the Tibetan Buddhist tradition, and only high monks and lamas with profound attainments in Buddhist philosophy can hold the ritual. Data shows that the Panchen Lama has received more than 1,000 tantric rituals including the Kalachakra ritual to date, and his tantric Buddhist philosophy knowledge becomes increasingly sophisticated.” The fact that Gyaltsen Norbu is highly inexperienced does not bother Beijing.
In Tibet, there was of course no mention of the Dalai Lama.
The farce was held outside the Tashi Lhunpo Monastery, the traditional seat of the Panchen Lamas; the Chinese authorities built for the occasion a new palace, the Dechen Kelsang Phodrang on a 112,000 square meters areas.
The Chinese media reported that more than 100,000 Buddhist followers, some 100 ‘high’ lamas and 5,000 monks and nuns attended the function. Monks and lay people had come from the Tibetan Autonomous Region as well as from the adjoining provinces of Sichuan, Gansu, Qinghai, and Yunnan. It is at least what the Chinese propaganda says.
The truth is that many ‘devotees’ were coerced to attend the rituals.

The Bodh Gaya Kalachakra
Do not be mistaken, Beijing has not become enamoured of religious practices. The Communist authorities were quick to denounce the Bodh Gaya event as ‘illegal’, the Tibetans (from Tibet) intending to attend it were threatened with dire punishment.
Radio Free Asia (RFA) reported: “Thousands of pilgrims from Tibetan-populated areas of western China who had hoped to attend have been forced to return home though, while others have been blocked from leaving China.”
While in Tibet, ‘devotees’ were forced to attend the Shigatse Kalachakra, in India, they are forbidden to participate.
RFA got hold of an official notification which was circulated in Dechen prefecture of Yunnan province: those who would not obey the orders could spend between 10 days to five years in jail, it says.
It was addressed to ‘all relevant departments at all levels, township, county, and prefecture’; it warned Tibetans not to share information — including audio or video clips — related to the Kalachakra either on the Internet or on social media: “Other related activities, such as organizing celebrations in support of the Kalachakra, are also forbidden.”
The notice added: “Anyone engaging in these acts will be in violation of Article 55 [pertaining to national security] of the Public Security Law and will face severe consequences,” the notice adds.
The notice was distributed in December asking each Tibetan household to immediately provide information about any county’s residents already in India. The families were further warned “that anyone found to have participated in the Kalachakra teachings will lose their passport and ration card after they return. If they are monks or nuns, their right to study Tibetan Buddhism will also be revoked.”
The message was clear: only the Kalachakra organized by the Party is legal.
The Chinese press had explained that Kalachakra means ‘Wheel of Time’; the ritual prepares devotees to be reborn in Shambhala, a celestial kingdom which will vanquish the forces of evil in a future cosmic battle.
An interesting program!

New Border Regulations
Probably related to the ‘Indian’ Kalachakra, reinforced border regulations were recently announced. According to The Global Times: “The designated border areas under the new regulation now include land ports, trade zones and scenic spots, expanding the scope of the old regulation that has been in effect since 2000.”
Badro, deputy head of the Tibet border police explained: “As Tibet further opens up with fast economic development, the border areas have witnessed more disputes and diverse criminal activities, including those involving separatism, illegal migration and terrorism.”
But the real purpose was the Bodh Gaya Kalachakra. .
The new regulation include a compulsory ‘Border Resident New Identity Card’ (BRNIC), issued for border residents.
A notification said: “Border residents can apply BRNIC for one time. ...Border Public Security Department is issuing BRNIC without any payment. …[Soon] the Border Public Security Department will make BRNIC procedure online to avoid difficulties. …Border residents can go through border check post with BRNIC without any difficulties.” BRNIC holders may be allowed to go through border check posts, but not to Bodh Gaya.
As a result of the new rules, some 7,000 Tibetans hoping to attend the empowerment had to cancel their plans.
RFA asserted: “Thousands of pilgrims from Tibetan-populated areas of western China who had hoped to attend have been forced to return home, though, while others have been blocked from leaving China.”
RFA quotes one of the organizers, Karma Gelek: “It is extremely unfortunate and sad that so many Tibetans who wanted to attend could not come, and that many others who were able to come have had to return to Tibet under strict deadlines,” Gelek added, “This raises serious questions concerning China’s claim that it allows religious freedom.”

The Dalai Lama’s influence
The Dalai Lama has still a tremendous influence on Tibetan crowds; a telling example: religious observances and prayers are held in Tibet while the function goes on Bihar. A source living in Tibet told RFA that this was done in open defiance to authorities’ warnings: “Residents of at least one Tibetan-populated county in Sichuan have been gathering in small groups to pray and to listen to the Dalai Lama’s teachings on the Internet.”
The source added: “They have also shared videos of the Dalai Lama’s teachings over social media, translating them from the [Dalai Lama’s] Central Tibetan dialect to the local dialect so that people can understand. …Several hundred elders have also gathered to recite mantras and say other prayers.”
More than one thousand Tibetans, who were ordered to return home, had a special audience of the Dalai Lama in Dharamsala, before their departure.
Mostly from Eastern Tibet, they received religious advice from the Dalai Lama. Though they had dreamt to be in Bodh Gaya for the Kalachakra teachings, the Dalai Lama told that they could get the same benefit wherever they are and that he would keep them in his mind.

Double Standards
But all this shows China’s double standards in the field of religion today.
In Tibet, people are forced to attend the ‘empowerment’; when it comes to India and the Dalai Lama, they are threatened if they dare to participate.
But the Tibetan people are no fools; they know which function carries the most Sacred Blessings.
Posted by Claude Arpi