A new dam on the Brahmaputra

The construction of a second large dam on the Yarlung Tsangpo (which becomes the Siang and later the Brahmaputra in India) is well under way.
The dam is coming up at Gyatsa (Chinese Gyaca), a few kilometers downstream from the first dam at Zangmu.
In November 2014, the Indian Press mentioned the launching of the first unit of the run-of-river hydropower plant at Zangmu.
Xinhua then affirmed: “Tibet’s largest hydropower station became partly operational, harnessing the rich water resources of the Yarlung Zangbo (Tsangpo) River to develop the electricity-strapped region.”
The Zangmu hydropower plant, located at 3,300 meters above sea level, has a height of 116 metres for a length of 390 meter; it is 19 meter wide at the top and 76 meter wide at the bottom. The project is said to cost US $ 1.5 billion.
In 2014, Xinhua asserted that the entire project, which “straddles the middle reaches of the roaring Yarlung Tsangpo River, will have a total installed capacity of 510 megawatts upon completion”.
Liu Xiaoming, an official of the State Grid’s Tibet Electric Power Co said: “The hydropower station will solve Tibet’s power shortage, especially in the winter,” while Lobsang Gyaltsen, the head of the Tibetan Government in Lhasa affirmed: “The region has strived to protect the environment throughout construction. The hydro-plant is a good example of clean energy development.”
I then wrote: "Zangmu, the only hydro-power plant on the Yarlung Tsangpo, once completed, would probably be acceptable to India, but China plans to have a cascade of five other dams along the river at Jia Cha [Gyatsa], Lengda, Zhongda, Jie Xu and Lang Chen." 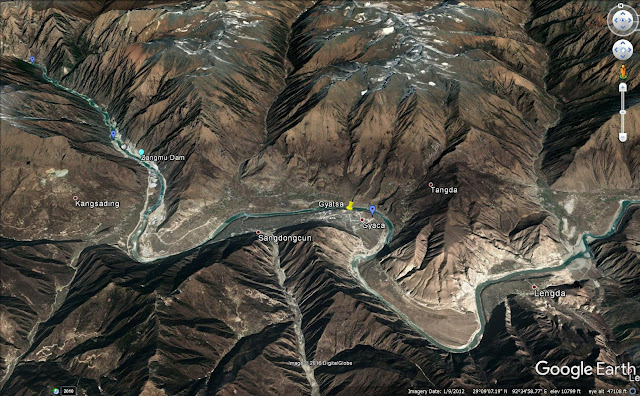 The Gyatsa Dam
The second large dam on the Yarlung Tsnagpo, has progressed very fast according the picture posted above.
According to Tibet Online: "The construction of hydropower energy is closely related to the overall development and will benefit the masses to a great extent. Tibet is rich in hydropower resources and has enormous development potential."
The Beijing-run website adds: "The construction of hydropower projects cannot only solve Tibet’s electricity problem, but also let the Qinghai-Tibet power network play a much great role as well as spare space for the local industrial development."
The website gives another piece of information: "In accordance with the water resources development plan of Sanjiangyuan region, by the end of the 13th Five Year Plan, the energy continuous base of 'West-East power transmission project' will be basically built in Tibet."
The Sanjiangyuan National Nature Reserve (SNNR) or Three Rivers Nature Reserve, is the area on the Tibetan Plateau where the Yellow River, the Yangtze River, and the Mekong Rivern have their sources. The SNNR has been established to 'protect' the headwaters of these three rivers. The reserve consists of 18 subareas, each containing three zones which are managed with differing degrees of strictness.
Does it mean, 'no more dams after 2020'?
It is very doubtful as in any case, the SNNR and the Yarlung Tsangpo basin are not located in the same area of the plateau.
However the power grid will probably be completed.
In all probability, the Gyatsa dam is of run-of-river dam with more or less the power-generating same capacity than the Zangmu dam.
Posted by Claude Arpi