The curious case of Zhang’s visit 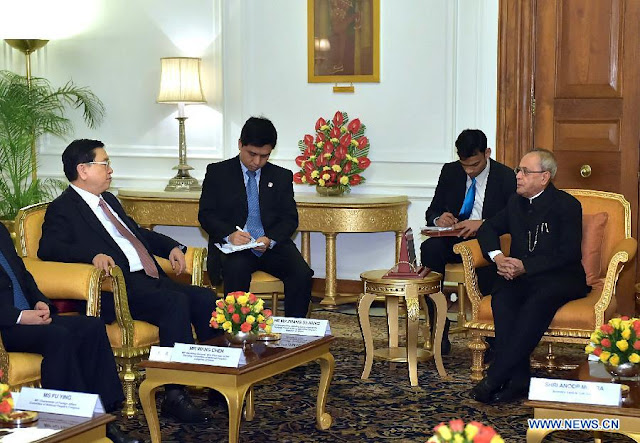 My article The curious case of Zhang’s visit appeared yesterday in The Asian Age/Deccan Chronicle
Here is the link..

Has not India missed a chance to convey that everything is not rosy in the bilateral relations? Why was the MEA nowhere to be seen? Why did India lose such an opportunity to convey to this powerful Chinese politician, its position on several vexed issues?


The Indian media is a strange creature. It spends its time and energy on obsessions; every few days, it focuses on a new one while wearing blinkers for everything else. But even when it ignores “important” news, nobody seems too much disturbed, as long as there is a good cricket ingredient and some spicy masala.
Imagine my surprise as a China watcher when, one morning earlier this week, I found in my mailbox a communique of the Public Information Bureau announcing that an all-powerful member of the standing committee politburo of the central committee of the Communist Party of China had met Prime Minister Narendra Modi on the previous day.
Zhang Dejiang, chairman of the National People’s Congress (NPC), China’s legislature, had called on Mr Modi, said the PIB.
Mr Zhang is not an ordinary Chinese; he is third most powerful person in the Middle Kingdom; he is one of the seven “emperors” ruling a country which everyone fears (though few will say it openly).
This powerful personage was in Delhi (and later in Mumbai) and nobody seems to have known about it. Was Mr Zhang not as important as LaMoGate? Probably!
Remember when Middle Kingdom No. 2, Premier Li Keqiang, came to Delhi in May 2013. The press went wild for several weeks before. It is true, some People’s Liberation Army’s jawans had come uninvited and were camping in the desolate Depsang plains of Ladakh; this was really irritating.
Then, in 2014, “Emperor No. 1” came. When Xi Jinping landed at Ahmedabad in September, Mr Modi was determined to give him a genuine taste of “Modi Land”. This time again, the masala came from the remote Chumur area of South Ladakh where 1,500 PLA men crossed the “undefined” Line of Actual Control; they were ready to set up camp when India decided to send 2,000 Indian jawans to push them away. Media coverage lasted for weeks.
This time Communist boss No. 3 came and went and noticed?
Hardly anybody!
Even the ministry of external affairs was silent. Its spokespersons are usually known to be amongst the quickest twitterers in India, but this time not a single tweet.
On June 15, the Prime Minister’s Office merely reported, via the PIB, that Mr Zhang called on him on that day. The visit was termed a “parliamentary exchange”.
The PIB communique did not tell us what was really discussed. A new proposal for the LAC in Ladakh? An alternative to the stapled visas for the people of Arunachal or Kashmiris? The “peaceful” spread of the PLA Navy on the oceans of the planet? The new route for the Kailash yatra, flagged off by the foreign minister herself? We will have to wait at least 50 years to read the declassified files.
Mr Zhang just endorsed the Prime Minister’s views that the 21st century is the Asian century and the future of the continent will depend on what India and China achieve individually and jointly.
Apart from the usual bilateral collaboration, the leaders expressed their appreciation for the new interest for the ancient cultural and “spiritual” ties between India and China, citing the joint yoga-tai-chi demonstration witnessed by Mr Modi and Premier Li in Beijing.
Why waste such a high-level visit for such banalities?
I got to know what had happened while scanning the Chinese press. Mr Zhang’s visit lasted four days. It was a “friendly” visit at the invitation of the vice-president and the Lok Sabha’s Speaker, Sumitra Mahajan. It was the first trip in India of an NPC’s chairman in 14 years.
Xinhua reported that Mr Zhang met with vice-president Ansari. They called for strengthening cooperation between legislative bodies of China and India.
During his meetings with the chairpersons of the Indian Houses, Mr Zhang said that he wanted to “upgrade the level and improve the quality of the current cooperation between the legislative bodies of the two countries.” He suggested that the two sides should carry out closer exchanges.
Mr Zhang also met President Pranab Mukherjee to whom he conveyed the cordial greeting of President Xi. He told the Indian President that India and China are not only the two biggest developing countries, but also the two most dynamic market economies in the world. He added: “The two countries should join hands to realise goals for peaceful development, cooperative development and inclusive development, to benefit the 2.5 billion people of the two countries.”
In other words, the usual stuff, but it is always good when it is reiterated at the highest level.
Mr Mukherjee told him that India always lays great importance to developing good, friendly, neighbourly relations with China.
Later, Mr Zhang went to Mumbai where he met the governor and the chief minister.
Has not India missed a chance to convey that everything is not rosy in the bilateral relations, especially on the border issue?
Why was the MEA nowhere to be seen? Even the South Block twitters had fallen silent? Why did India lose such an opportunity to convey to this powerful Chinese politician, its position on several vexed issues?
As for the media, could it not have dropped the cricket scams for a day and covered the visit, asking the right questions?
Posted by Claude Arpi