Tibet: a Zone of Ahimsa or Himsa? 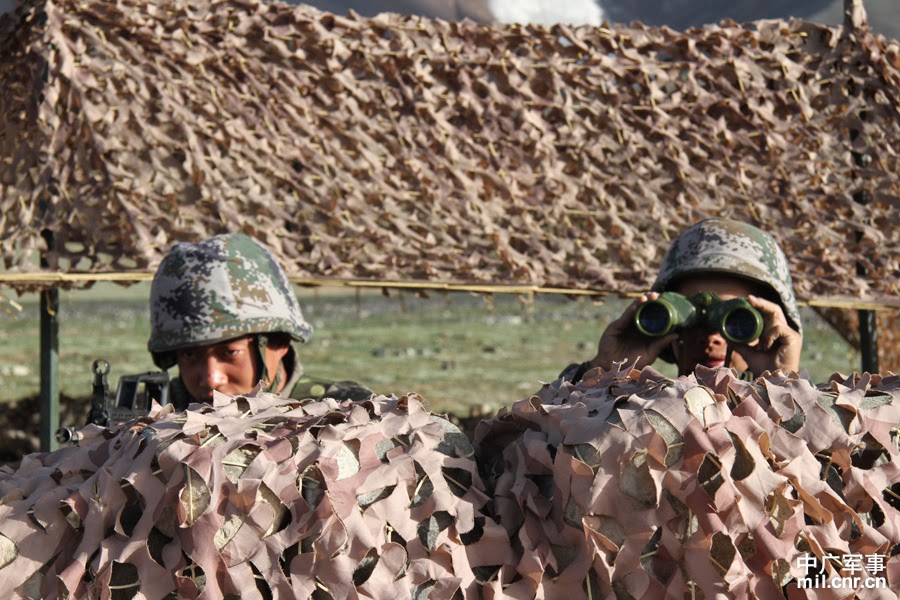 In 1987 in Washington DC, the Dalai Lama proposed the establishment of a Zone of Peace on the Tibetan plateau.
It was the first point of his Five-Point Peace Plan for Tibet. He said:


I propose that the whole of Tibet, including the eastern provinces of Kham and Amdo, be transformed into a zone of 'Ahimsa', a Hindi term used to mean a state of peace and non-violence.
The establishment of such a peace zone would be in keeping with Tibet's historical role as a peaceful and neutral Buddhist nation and buffer state separating the continent's great powers.  It would also be in keeping with Nepal's proposal to proclaim Nepal a peace zone and with China's declared support for such a proclamation.  The peace zone proposed by Nepal would have a much greater impact if it were to include Tibet and neighbouring areas.
The establishment of a peace zone in Tibet would require withdrawal of Chinese troops and military installations from the country, which would enable India also to withdraw troops and military installations from the Himalayan regions bordering Tibet.  This would be achieved under an international agreement which would satisfy China's legitimate security needs and build trust among the Tibetan, Indian, Chinese and other peoples of the region.  This is in everyone's best interest, particularly that of China and India, as it would enhance their security, while reducing the economic burden of maintaining high troop concentrations on the disputed Himalayan border.

Today, China is militarizing more and more the ecologically-fragile plateau.
Recently China tested again its HQ-16/LY-80 Surface-to-Air Missile (SAM) Air Defense System  on the plateau and posted pictures of the exercise on its official websites.
Already in September 2012, it was reported that the PLA had staged "a live-fire test of what appears to be a new fully functioning high altitude surface-to-air missile (SAM) somewhere in the Tibetan plateau on 20 July [2012] in a move intended to prepare for potential US strikes against Chinese interests in the region."
US strikes or Indian strikes?
Why should the US strike the Tibetan plateau?
Though geographic details of the launch site were not mentioned, The PLA Daily said the test was conducted under the authority of the Lanzhou Military Area command (MAC).
It probably meant in the Aksai Chin or Ngari area.

What is a HQ-16 missile?
According to a specialized website: "The LY-80 is the export variant of the HQ-16 mobile, medium-range, Surface-to-Air (SAM) Air Defense System and developed by China Aerospace Science and Technology Corporation (CASC).
The HQ-16 can be used to defend in all-weather conditions against multiple targets, such as aircraft, helicopters, unmanned aerial vehicles, cruise missiles and other precision guided munitions. The HQ-16 can be integrated with other Air Defense Systems, such as the long-range HQ-9, short-range HQ-7 and close-range LD-2000 to form a multi-layer Integrated Air Defense System (IADS)."
Another defence website explains:


The HQ16A or LY-80 is a Chinese-made ground-to-air defence missile system which was introduce in the Chinese armed forces in September 2011. This is a land based version of the HQ-16 system used in ships (and fired from a Vertical Launch System) containers. The HQ-16A is based on a joint development of the Russian Buk-M1 (SA-11 'Gadfly') and Ural/Buk-2M (SA-17 'Grizzly') Surface-to-Air Missile (SAM) systems, for use from mobile ground vehicles and later from ships. The HQ-16A is able to engage aerial targets at high altitude; the mid-range HQ-16 is also able to intercept very low-flying targets at a distance of up to about 40 kilometers, filling the gap between the HQ-7 short-range SAM and the HQ-9 long-range SAM systems. The HQ-16A missile can hit targets of an altitude from 400 to 10,000 meters.
The HQ16A (LY-80) launcher missile system is carried by an 8x8 truck that contains a command and control station behind the cab, and behind those are six firing missile containers in two rows of three. These containers are tilted back so that the missiles can be fired straight up, just as they are from Vertical launch System cells. In firing position, the wheels are raised off the ground and the carriage is supported at four points by hydraulic jacks, two at the rear and one on each side.

Missile
The HQ16A (LY-80) missile can intercept an aerial flying target from an 15 m to 18 km of altitude, while its maximum interception range for combat aircraft is 40km, and between 3.5 km and 12 km for cruise missiles flying at an altitude of 50 meters at a speed of 300 meters/second. Single-shot kill probability is a claimed figure of 85 per cent against combat aircraft, and 60 per cent against cruise missiles. The missile guidance system is of the composite type, comprising initial independent inertial guidance and intermittent illumination and semi-active homing terminal guidance. 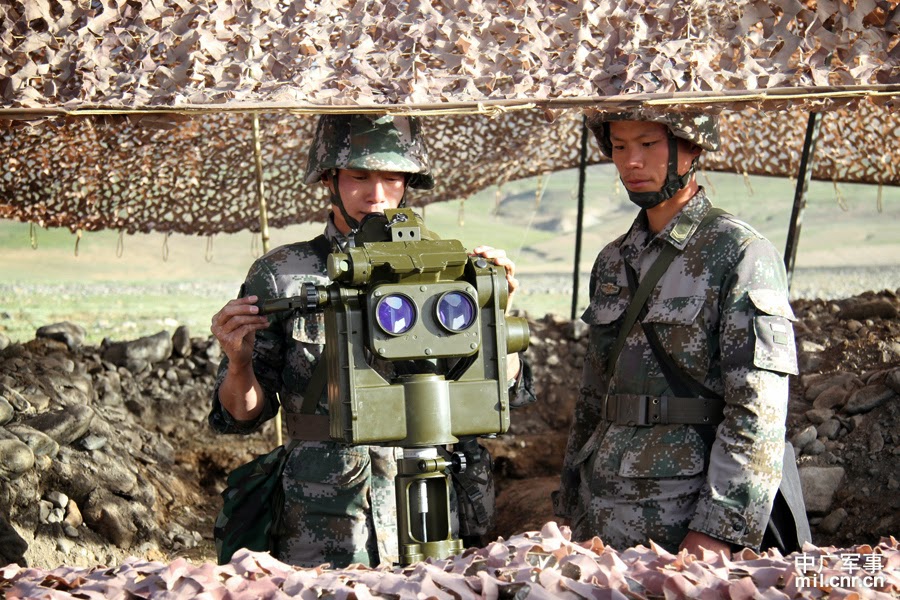 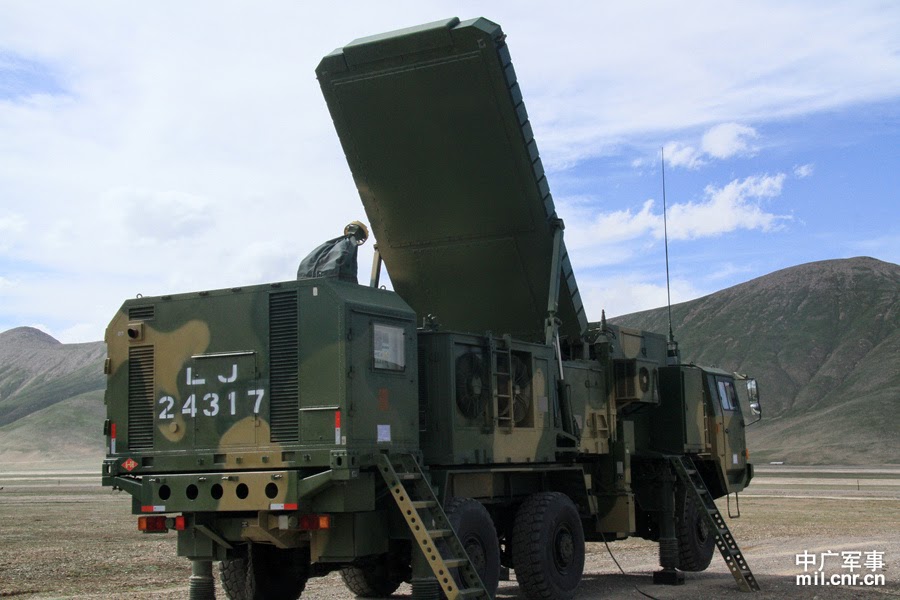 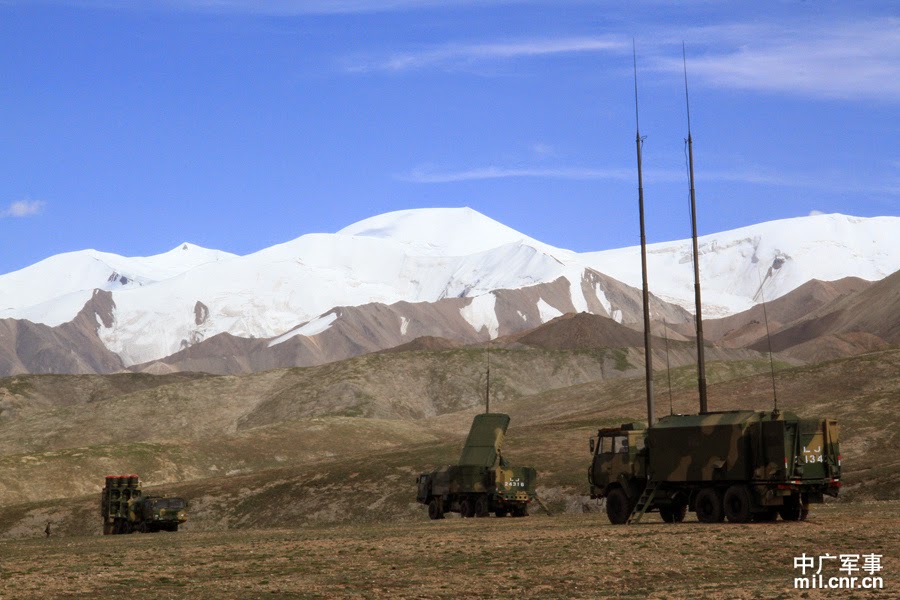 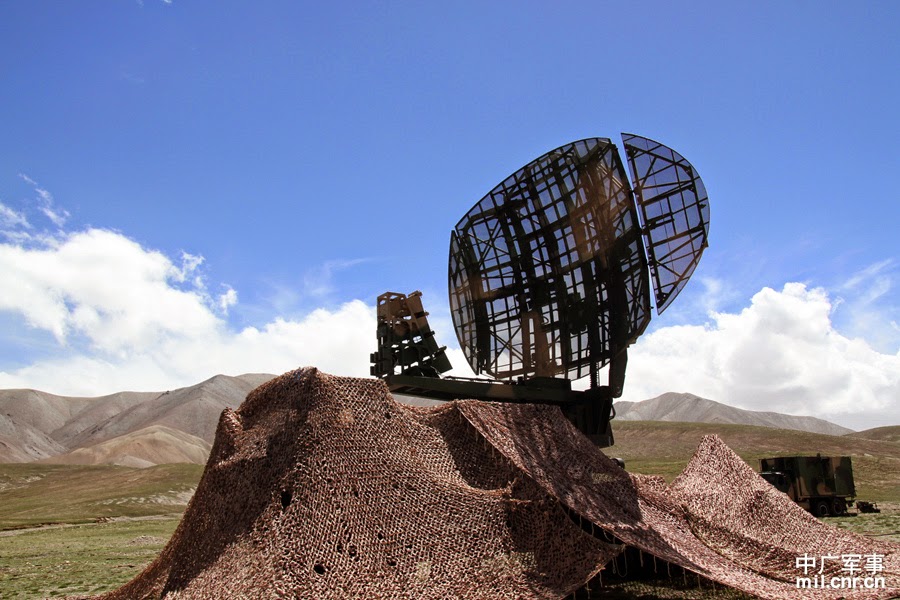 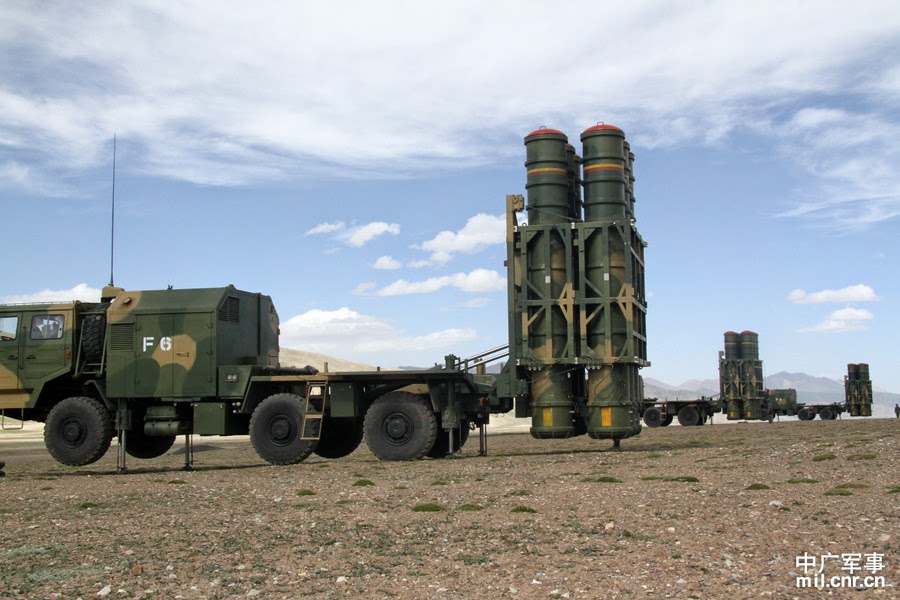 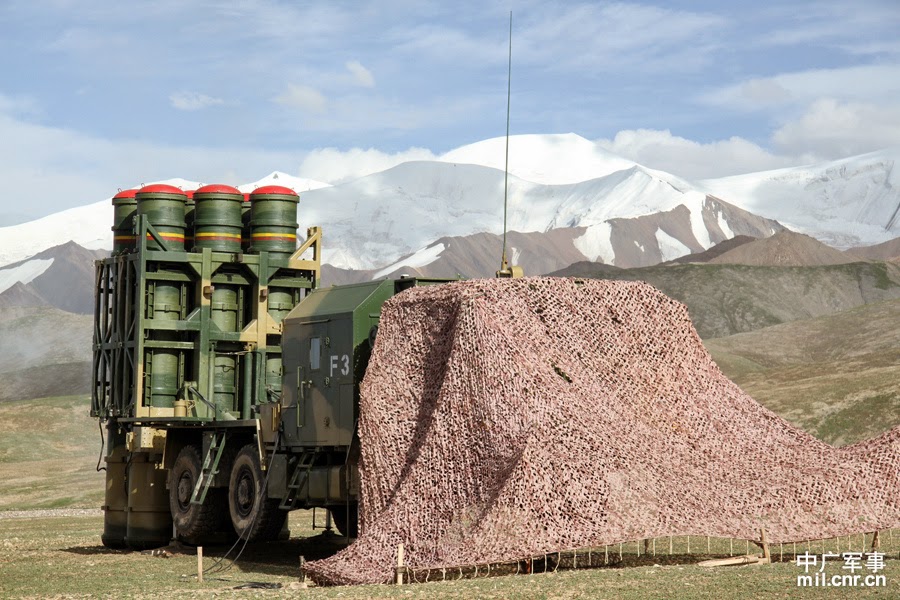 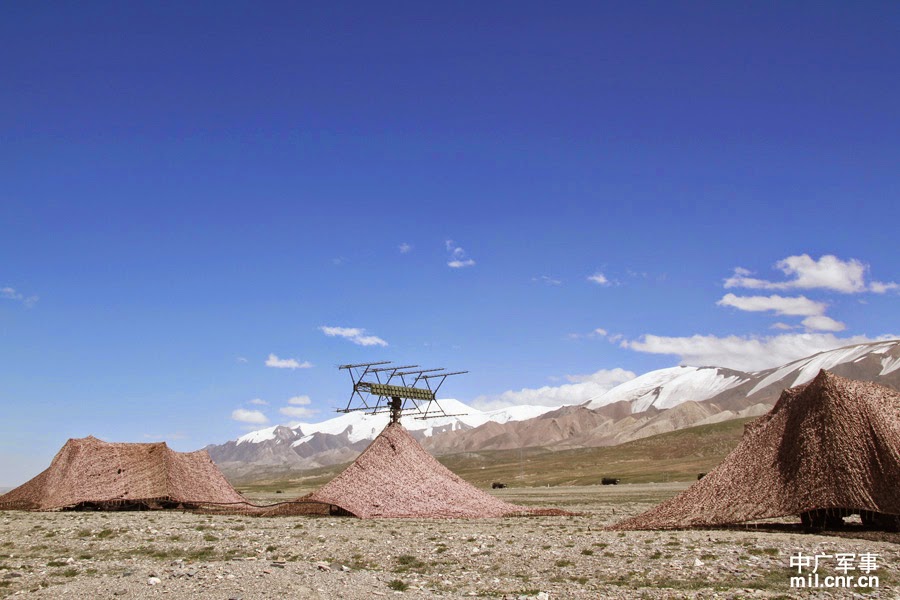 But that is not all.
A few days ago, The People's Daily reported that J-11 fighters from the PLA Air Force (PLAAF) based in the Chengdu Military Area Command (MAC) practice 'in actual-combat training' over the Tibetan plateau.
Impressive pictures! 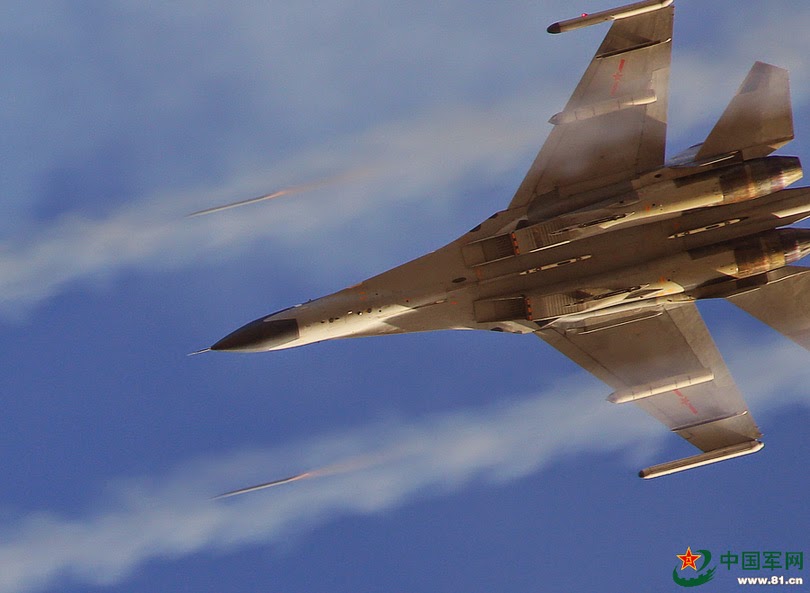 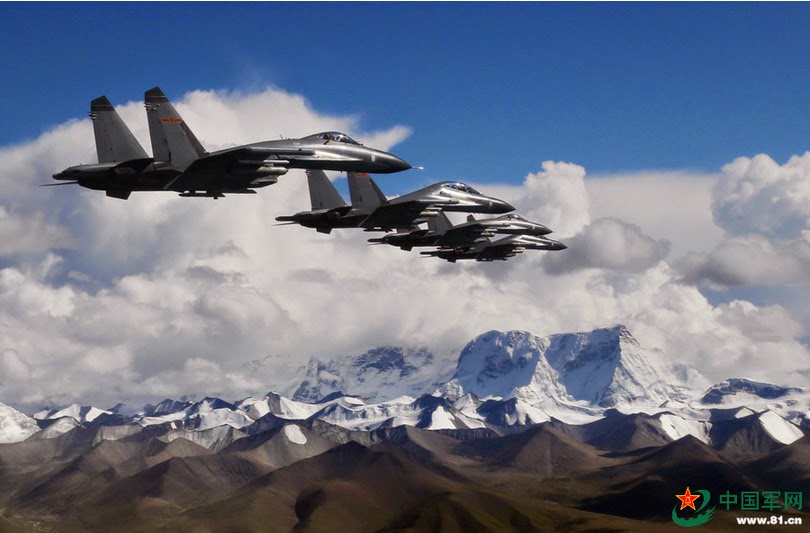 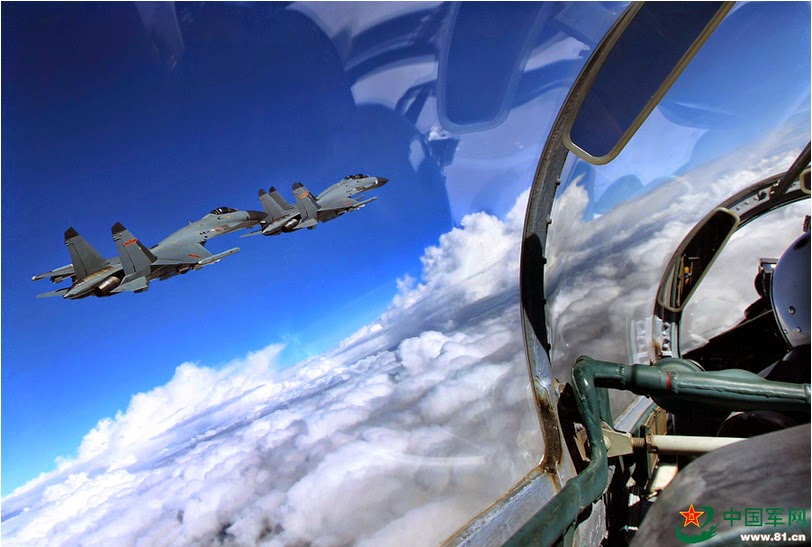 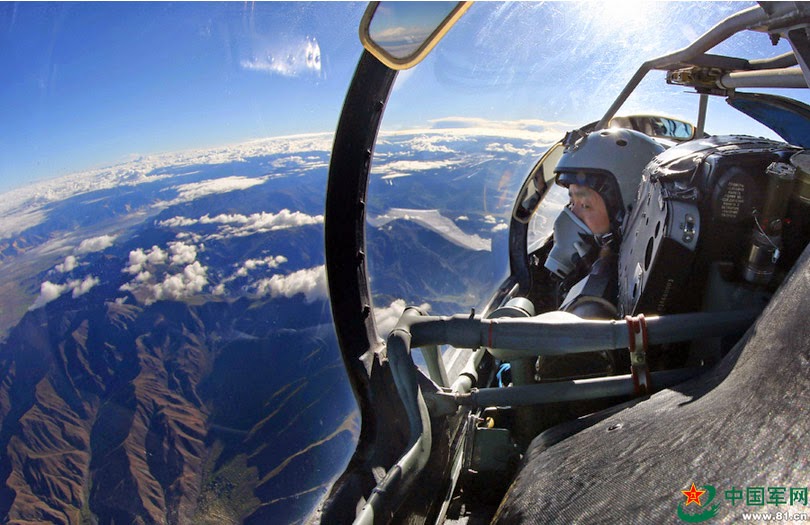 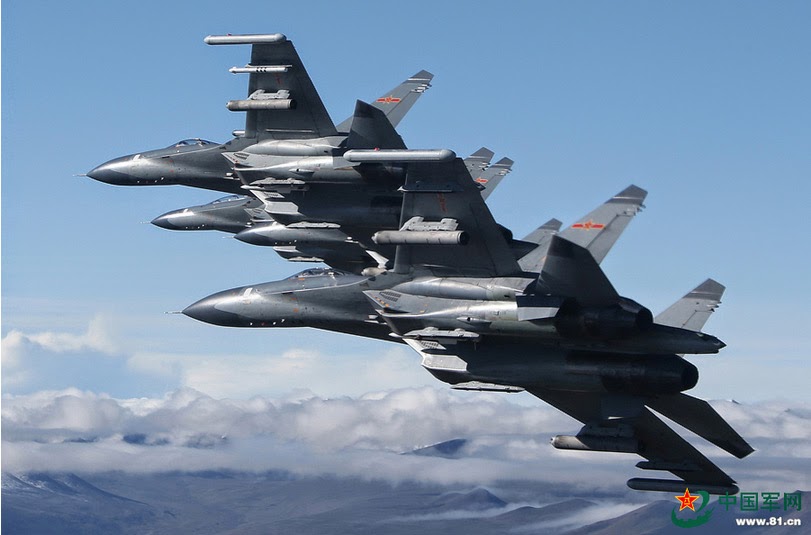 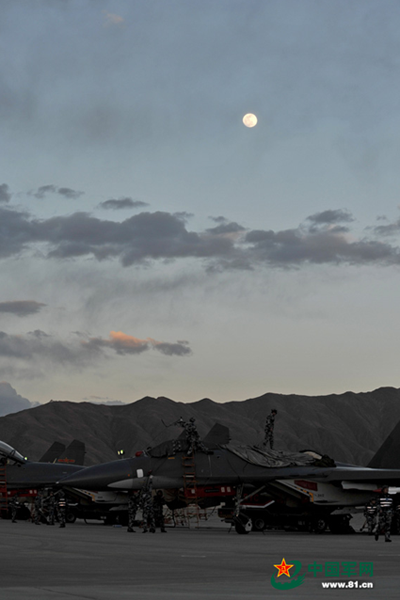 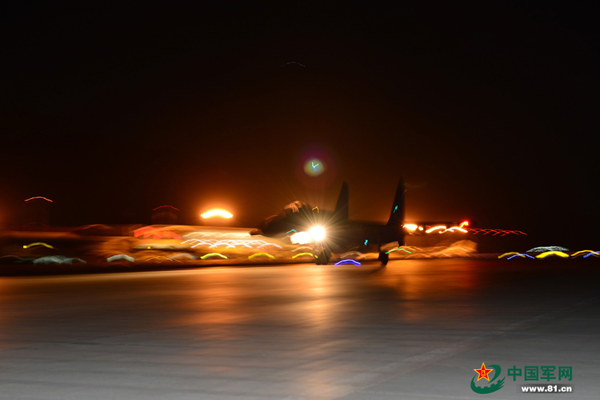 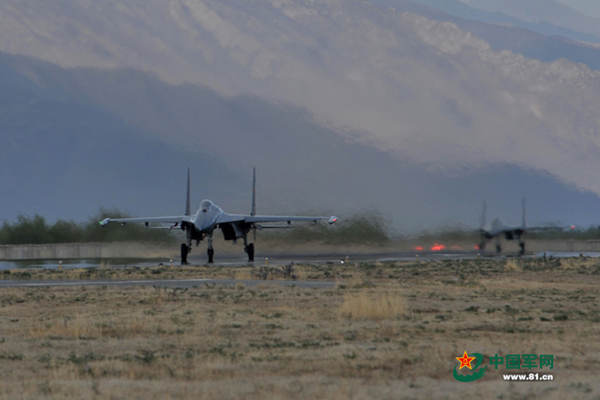 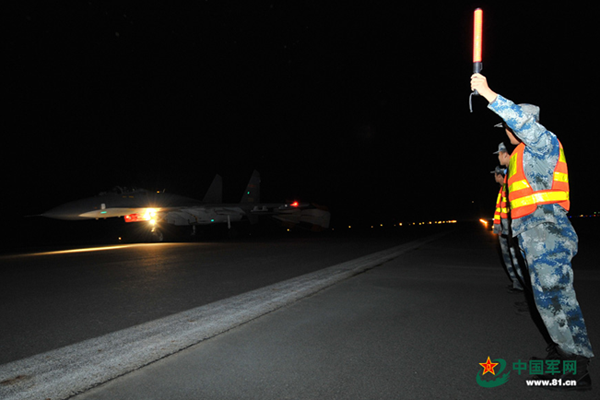 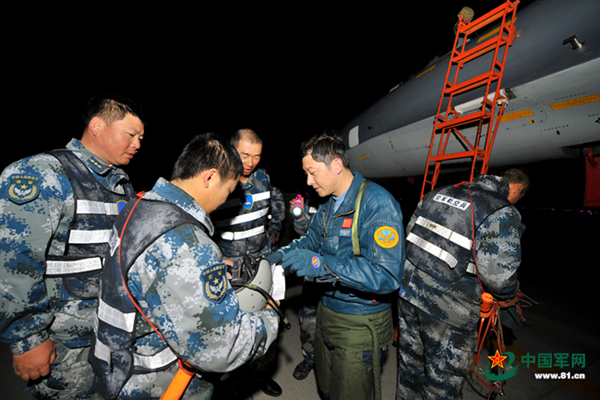 Another exercise: on May 11, 2014, the Scouts of the Shigatse Military Sub-Command of the Chinese People's Liberation Army (PLA) in Tibet conducted 'a military skills training on the plateau'.
According to The People's Daily the objective was to improve their combat capability.
The photos seem to have been taken near the Indian border, as the landscapes appear to be near the gorges of the Yarlung Tsangpo (Brahmaputra) 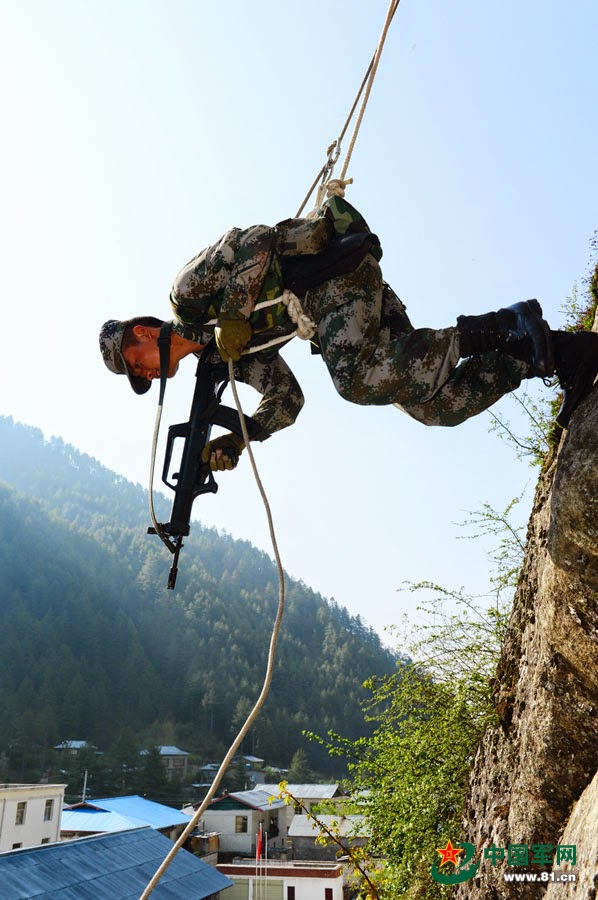 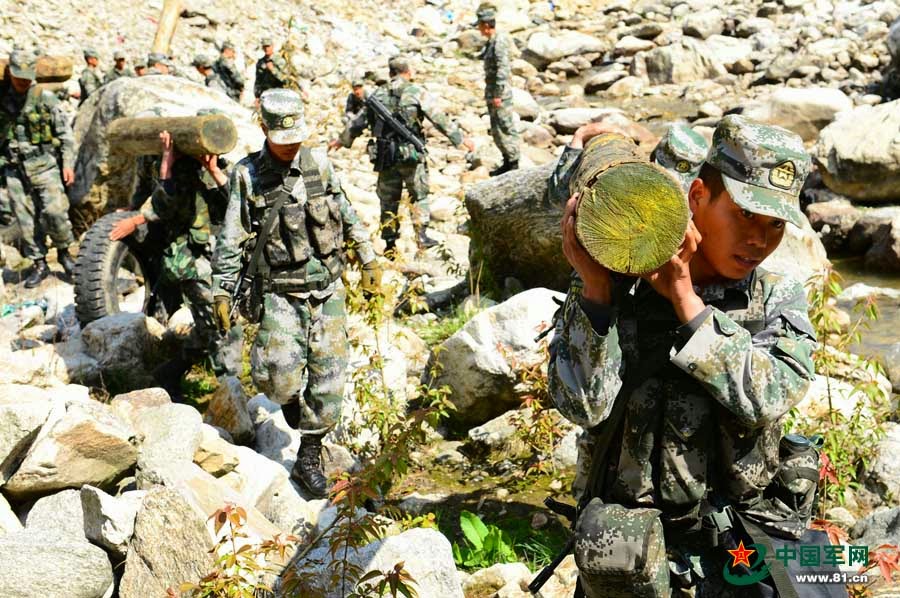 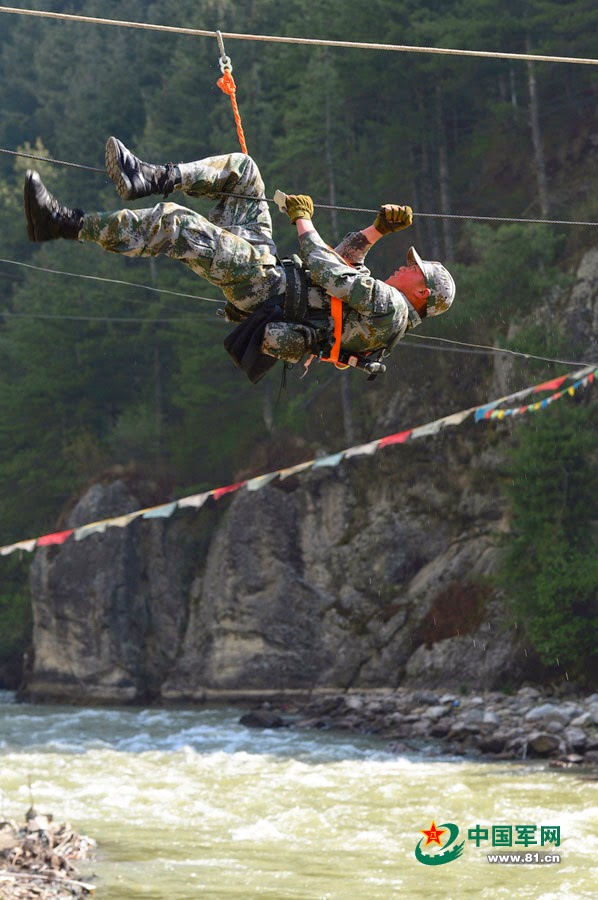 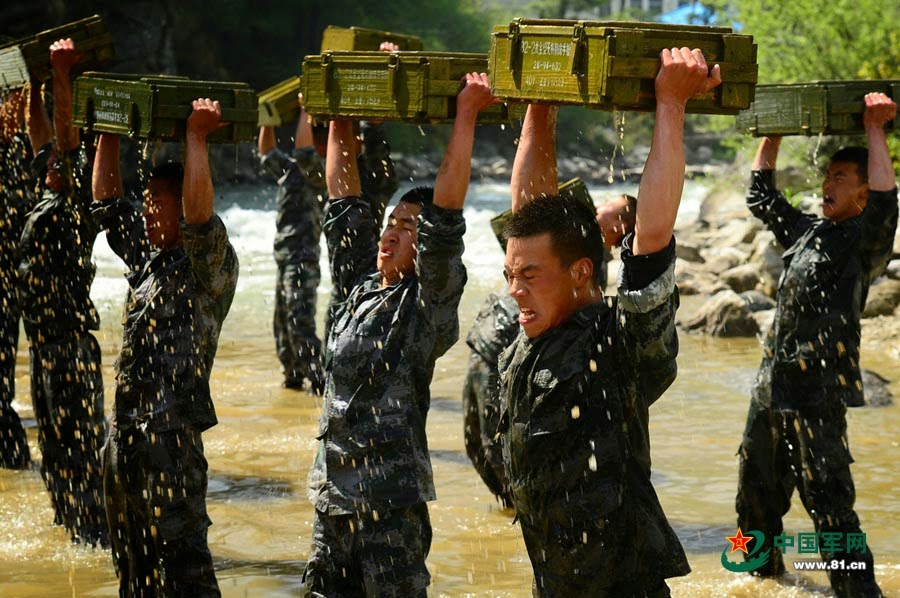 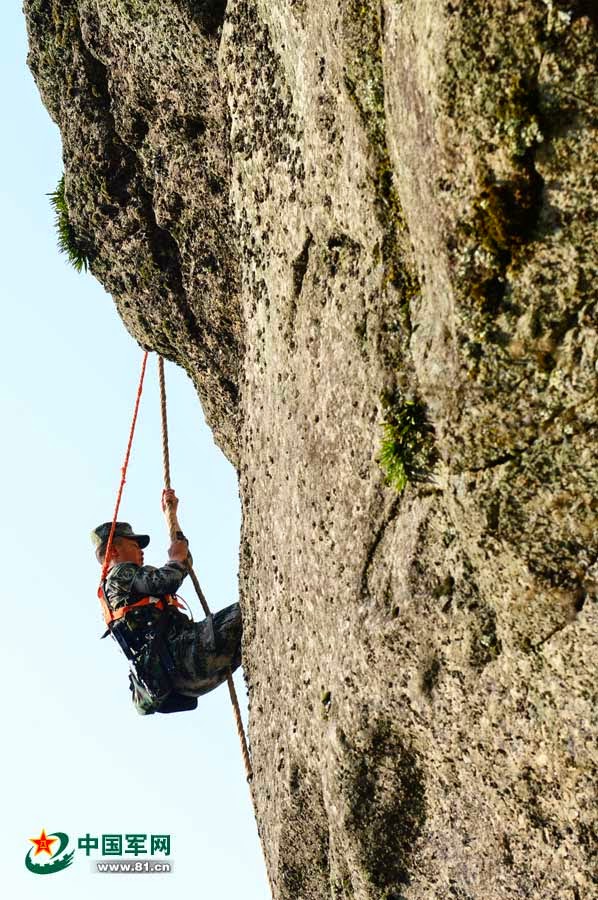 A few days back, I already wrote an article on a similar subject (The more you sweat in peacetime, the less you bleed in wartime).

Today, 'Tibet as a Zone of Peace' seems a faraway concept.
Posted by Claude Arpi