Last year, on March 9, 2013, China's boss, Xi Jinping visited the Tibet delegation at the National People’s Conference.
In his speech, the Chinese President pledged that under his leadership, Beijing would pay the same close attention to Tibet as previous 'leadership groups' and would continue to emphasize “the maintenance of stability and leap-frog style development” (weihu wending 維護穩定and kuayueshi fazhan 跨越式發展) following China’s own special pathway and according to Tibet’s special characteristics.
This year Yu Zhengsheng, who chairman of the Chinese People's Political Consultative Conference (CPPCC) and a member of the Standing Committee of the Politburo, met the Tibetan delagation on March 10 (which is celebrated outside Tibet as the National Uprising Day).

Yu Zhengsheng, took part in a 'panel discussion' and stressed the importance to adhere to the 'rule of law' in Tibet.
It is clearly the leadership's first and foremost preoccupation.
Yu Zhengsheng also said that he wanted concrete measures to be taken to support Tibet's economic and comprehensive development, improve people's well-being and ensure long-term peace and stability in Tibet.
His 'wish' has now filtered down to the 'local' authorities in Tibet, who have enacted new 'regulations' to implement Beijing's wishes.
According to Xinhua: "Authorities in southwest China's Tibet Autonomous Region are enacting a new legally-binding regulation to safeguard the heritage and development of the Tibetan language".
The Chinese news agency reported: "The Tibetan Language Work Committee and other authorities in the plateau region have finished drawing up a draft regulation on the ethnic language." 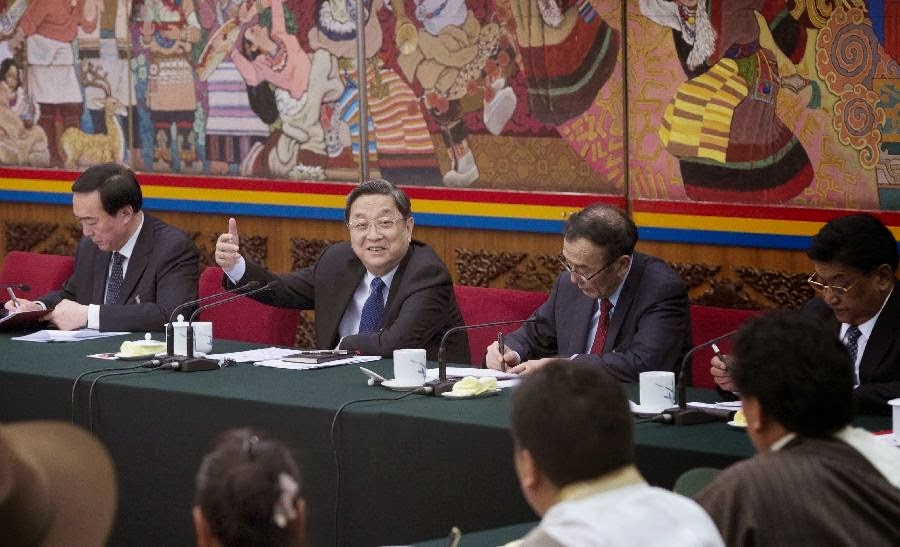 An ethic Tibetan Chodrak, who is the committee's deputy director (he is also the major of Lhasa) explained that the regulations, which has gone through four amendments, are expected to implemented in September this year. For Chodrak, the regulation "enshrines the study, usage and development of the Tibetan language in law and clearly shows the attention being paid to the issue by the central and local governments."
He boldly asserted that the rumor that Tibetan language is dying is totally groundless.
According to the local Communist authorities in Tibet, "the new regulation will provide a legal protection for the rights and freedom of the people of Tibetan ethnic group to study, use and develop their language."

Will the new regulation be different?
In an interview in 2010, the Dalai Lama told a group of scholars (I was with them):


"More than 10 years ago, when Chen Kuiyuan was Party Secretary in Tibet [1992-2000], at a Party meeting, he mentioned that the ultimate threat to China (its separation from Tibet) is the Buddhist faith of the Tibetans. Two weeks ago, I was in Switzerland, I met some Tibetans. They know very well about the Tibetan University in Lhasa; they told me that the level of Tibetan studies before Chen Kuiyuan was quite good. After Chen became Party Secretary, it changed. The Tibetan texts were banned. Only the Chinese curriculum was allowed and translated into Tibetan; the courses were [conducted] according to this curriculum. Chen Kuiyuan saw the unique Tibetan culture heritage as a threat to separate Tibet from China. So, he systematically eliminated Tibetan [culture] from Tibet."

And this happened despite the 'regulations' and other 'provisions'.
Let us hope that this time it will be different.
China Tibet Online also reported that the Standing Committee of Tibet People's Congress had decided to promulgate some "Implementation Measures of Law for Intangible Cultural Heritage Protection in Tibet Autonomous Region".
It should be implemented after June 1, 2014.
The news agency said that it will be different from the national law, the implementation measures contain 49 specific articles to be enforced in Tibet only.
It speaks of "a humanistic care for the inheritors who are losing the ability to carry on the intangible culture."
I am not quite sure what these 'inheritors' are, but Article 33 of the 'implementation measures' stipulated "if an existing successor loses the ability to carry on the culture, a new inheritor for the intangible culture should be redefined by related cultural department, and at the meantime the replaced inheritor can be conferred an honorary title and enjoy a proper living subsidy rendered by government."
According to official sources, these 49 articles include "a general principle, survey of the intangible cultural heritage in Tibet, a list of the representative intangible cultural heritage projects, the inheritance and spread of the culture, and the legal responsibility and protection of these culture, which is a practical and unique layout to cover almost every step concerning the status quo and protection of the intangible cultural heritages in Tibet."
Only the future will tell if Mr. Yu and his colleagues are sincere in preserving the unique culture and language of the Roof of the World.
It seems to good to be true.

This reminds me of the joke about former President Hu Jintao.
Though he did not like this uncivilized, rustic place, Hu was posted for nearly four years in Tibet as party Secretary. He once mentioned to a journalist that he 'disliked Tibet's altitude, climate and lack of culture', in other words, 'everything'.
During his tenure, Hu often shuttled between Lhasa and Beijing where the real power was. There was a common saying about Hu amongst Tibetan cadres: 'Where is Hu?'
The answer was: 'Hu is in Beijing Hospital.'
He had to officially report sick each time he was going to Beijing!
Twenty-five years later, Tibet has changed.
Beijing today promotes Tibet as a great place, the best in China.
The China Daily says: "Tibet, aka the 'Roof of the World', is the highest region on the planet, with an average elevation of more than 4,000 meters. Located on a plateau north of the Himalayas, it is a mysterious, exotic place to many outsiders. Since the beginning of the 20th century, the massive, tranquil land with its majestic scenery and mysterious religious culture has exerted an overwhelming attraction on travelers. Tibet's capital city Lhasa is labeled one of the most dreamed-about cities in the world. An ancient city dating back 1,300 years, Lhasa is home to the magnificent Potala Palace, Jokhang Temple Monastery and Norbulingka (Garden of Treasures), all listed as world heritage sites. May to July is the best time to visit Lhasa, as it rains at night but is still sunny in the daytime."
How this will translate for the local Tibetans is another question.
The China Daily lists the top 10 attractions in Lhasa (with the admission fees).
The description are from The China Daily.

1. The Potala Palace
The Potala Palace is considered to be a model of Tibetan architecture. Located on the Red Hill in Lhasa, it covers more than 360,000 square meters and has 13 storeys. It was first constructed in 641, by Tibetan King Songtsen Gampo, in order to welcome his bride, Princess Wencheng of the Tang Dynasty. This structure was later burned to the ground during a war and rebuilt in the 17th century by the Fifth Dalai Lama. Over the past three centuries, the palace has gradually become a place where the Dalai Lama lives and works and a place for preserving the remains of previous Dalai Lamas.
[Though not mentioned, the admission fee recently passed from 100 to 200 yuan]

2.Jokhang Temple
Jokhang Temple, located on Barkhor Square in Lhasa, is Tibet's first Buddhist temple and is part of the Potala Palace. The temple used to be called Tsulag Khang ("House of Wisdom"), but is now known as Jokhang ("House of the Buddha"). It is the ultimate pilgrimage destination for Tibetan pilgrims. Featuring Tang Dynasty architecture, Jokhang Temple is a four-story timber complex. A statue of Sakyamuni at the age of 10 is one of only three statues designed by Sakyamuni himself.
Admission: 85 yuan (US $13.71)

3.Namtso
Namtso, or Lake Nam, is one of three holy lakes in the Tibet autonomous region and should not be missed by any traveler to the region. In Tibetan, Namtso means "Heavenly Lake". It is famous for its high altitude and imposing scenery. The second largest salt lake in China, Namtso covers 1,920 square kilometers and is also the second-highest salt lake, in terms of altitude, in the world at an elevation of 4,718 meters above sea level.
Admission: 120 yuan (US$19.35) (May 1-Oct 31); 60 yuan (US$9.67) (Nov 1-Apr 30)

4. Norbulingka
Norbulingka, literally the "Jeweled Garden," is a palace and its surrounding parks located in a western suburb of Lhasa. It was constructed in the 1740s as a summer palace for the Dalai Lama and later served the whole governmental administration. The place boasts typical Tibetan palace architecture, as well as gentle streams, dense and lush forestry, birds and animals. Covering an area of around 36 hectares, it is considered to be the largest man-made garden in Tibet. Being part of the "Historic Ensemble of the Potala Palace," Norbulingka is recognized as a UNESCO World Heritage Site, and was added as an extension to this Historic Ensemble in 2001.
Admission: 60 yuan (US$9.67)

5.Barkhor
Barkhor is a small neighborhood consisting of ancient streets and a public square surrounding Jokhang Temple in the old area of Lhasa. The oldest street appeared about 1,300 years ago, right after Jokhang Temple was built in 647, attracting thousands of Buddhist pilgrims. The streets are filled with a religious atmosphere and show the original Lhasa. Shops offer prayer wheels, chubas (traditional Tibetan clothing), Tibetan knives and religious article.
Admission: Free

6. Yambajan
Yambajan is famous for its wide range of hot springs, ranging from those with the highest temperatures in all of the country to boiling geysers. It sits in a basin at the foot of the Nyainqentanglha Mountains some 90 kilometers northwest of Lhasa. In the early morning, the town is covered in a white and luminous vapor. The hot springs in Yambajan contain various minerals and are believed to be therapeutic.
Admission: 30 yuan (US$4.83); Hot-spring bathing: 98 yuan (US$15.79)

7. Drepung Monastery
Built in 1416, the Drepung Monastery is situated at the foot of the Mountain Gambo Utse, about 10 kilometers (3.1 miles) to the western suburbs of Lhasa. It is the largest and most influential monastery of the Gelug Sect, a branch of the Tibetan Buddhism. Together with the Ganden Monastery and the Sera Monastery, Drepung Monastery is regarded as one of the "Three Great Monasteries" in Lhasa.
Admission: 55 yuan (US$8.86)

9. Tibet Museum
Located in Lhasa, the Tibet Museum is the first large and modern museum within the Tibet autonomous region. It was inaugurated in October 1999, with a permanent collection related to the cultural history of Tibet. Covering a space of 53,959 square meters, the museum displays more than 1,000 artifacts, including Tibetan art and architectural design such as Tibetan doors and beams.
Admission: Free

10. Ganden Monastery
Ganden Monastery, also known as Gaden Monastery, is one of the "great three" Gelukpa university monasteries in Tibet, together with the Sera Monastery and the Drepung Monastery. Located at the top of Wangbur Mountain, Tagtse county, Ganden Monastery was built in the seventh year of the Yongle Reign (1409) during the Ming Dynasty (1368-1644).
Ganden Monastery consists of over 50 structures and main halls include the Main Assembly Hall (or Coqen Hall), Zhacangs, Khangtsens, and Myicuns. Coqen Hall is positioned in the northern part of the temple and faces south; it is the largest assembling hall. It has three storeys and is 43.8 meters wide and 44.7 meters long. It features the statues of the Maitreya Buddha and the master Tsong Khapa, the initiator of Gelugpa. In addition, it also has many rare and precious cultural relics, such as Qing Dynasty (1644-1911) armor.
Admission: 40 yuan (US$6.44)