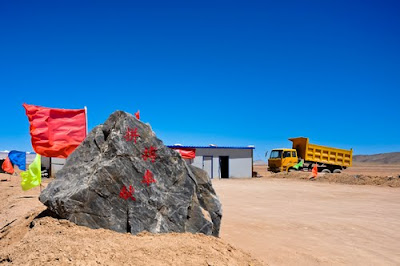 Another interesting analysis from you. Your blog is one of the best and its pleasure to read it

The true international border of Kashmir is on the Kukalang, Sanju -la and the Hindutash passes in the Kuen lun range in northern Kashmir. The Kashmiri border out post was at Shahidullah where the government of Kashmir maintained a fort to control the Kuen lun border area in northern Kashmir. The Chinese equivalent was the out post of Bringja from where the Chinese controlled the northern foothills of the Kuen lun range. This Kashmiri out post of Shahidulla is far to the north of Daulat Beg Oldi where the Chinese have presently pitched the tents with impunity. In 1954, a most despicable criminal act against India was perpetrated by Mr. Jawaharlal Nehru. He overnight illegally redrew the maps of Kashmir by publishing an illegal map for the first time which depicted the border at the Karakoram pass thereby depicting vast areas of Kashmir which had hitherto been depicted in colour as integral part of Kashmir including inter alia The official maps attached to the White Papers published in July 1948 and February 1950 by the Government of India's Ministry of States, headed , incidentally, by Sardar Vallabhbhai Patel, under the authority of India's Surveyor General G.F.Heaney which give them the legal status to determine the extent of the State of Kashmir as stipulated in Entry 15 in the First Schedule of the Constitution on India, as not part of Kashmir. He also ordered for the destruction of all the Pre 1954 maps published by the Survey of India which depicted the border on the Kuen lun and was thus in variance with the new map published by him in order to wipe out evidence of his crime. The new map published by Mr. Nehru is ab initio illegal and null and void and ultra vires the Constitution of India which is sacrosanct and supreme and the only thing that the Government of India as well as the Survey of India can now do is to apologise to the proud people of India for colluding with the Chinese and wrongly depicting inter alia the northern border of Kashmir and start correctly depicting the northern border of Kashmir on the Kuen lun range to the north of Dafdar in the Taghdumbash Pamir in Kanjut (capital of Kanjut is Baltit in the Hunza valley) and on the Kukalang pass north of Bazar Dara in Kanjut, Yangi pass to the north of Kulanaldi, and the Sanju and Hindutash passes in the Aksai Chin area in north eastern Ladakh in Kashmir. The mischief of the colonial English is also responsible for the current fiasco!