Money or Love? What is lacking in China 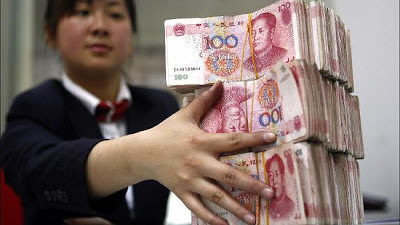 On the occasion of the New Year (Spring Festival), the Chinese media has tried to find out what ordinary people needs the most.
The South China Morning Post said it is 'overwhelmingly money'.
The Hong Kong newspaper quotes from survey conducted by a research firm TNS, which polled 5,000 people in mainland China, Hong Kong, Taiwan, Malaysia and Singapore about how people spend their money and what they would like for the Festival.
Here are the results: "In mainland China, 45% of consumers said they preferred to get money, 22% said they most wanted electronics and 5% said they hoped to get tea or coffee".
It appears that "the urge for cash was higher in Singapore, where 69% said they most wanted money for Chinese New Year, while 13% preferred food and 4% had their eye on electronics. In Taiwan, too, the ratio of the cash-hungry was high, with 65% saying they’d rather get money than anything else."
The Spring Festival is the main gift-giving season in China and other countries where important ethnic Chinese population live.
Hongbao or cash-stuffed red envelope are still extremely popular.
The TNS survey says that people put aside an average of 3,668 yuan ($588) to stuff in Lunar New Year hongbao.
The average amount given to close family members in China is 1323 yuan ($212), while other relatives are given around 890 yuan, the survey says.
Friends can expect to collect an average 432 yuan while colleagues get around 235 yuan.
Perhaps more interesting is a series of CCTV street interviews conducted by ChinaNews Video and Chongqing Television.
It is published (and commented) on chinasmack.com.
Some interviewees lack money, some love; a wise old man even says: "Lack and don't lack is all in one's mind", he is perhaps right.
'Lacking' is no doubt subjective and relative.
I would be interested by the results of such survey in India.

CCTV Street Interviews “What Do You Lack?”, Passersby Say They Lack Money, Love, and Women
Chongqing (ChinaNews)
on chinasmack.com
“2013, what do you lack?, the question asked by ChinaNews Video and Chongqing Television reports on the streets and alleys throughout Chongqing prompted many Chongqing residents to reflect on what they “lack or don’t lack” in their lives.
An old granny says she doesn’t lack anything, just a water meter. 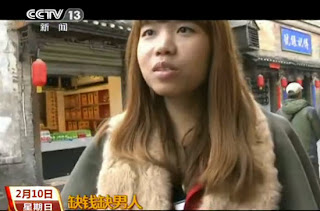 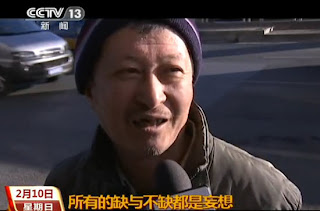 Since late January, many reporters have tossed out the question of “2013, what do you lack?” to nearly 1000 people on Chongqing streets. The people interviewed are normal office-workers, retirees, migrant workers, street cleaners, as well as members of the CPPCC, writers and entrepreneurs.
The various answers have made people laugh out loud or led people to think deeply, while netizens have mocked this question as another “godly question” following the previous “are you happy?”
[Note: The above refers to a previous CCTV street interview project that was conducted and broadcasted nationally around last year's 18th National Congress, asking "everyday people in China" if they were "happy", as noted in previous chinaSMACK reports. Netizens widely considered the entire thing an out-of-touch propaganda stunt. "Godly" as used here is a little difficult to translate, suggesting something as incredible or mocking it with a measure of incredulity.]
“Lack money” was the most common of the responses. Facing the ChinaNews camera, an “office worker” sighed that housing prices are too high, that wages aren’t rising, so he can’t afford to buy a house. Migrant worker Zhang Fu complained that he didn’t get much business last year, and wasn’t able to save much. A man in front of Southwestern Hospital said with worried face that his wife’s sickness cost him hundreds of thousands, and what he now lacks the most is money. A young guy working in sales hoped for more RMB. A man who dreams of winning the lottery rushed in front of the camera and shouted, “I lack 5 million!” “Chongqing Good Man” Zheng Dingxiang, who makes a living carrying goods on his shoulders said loudly, “I lack money not morals!” 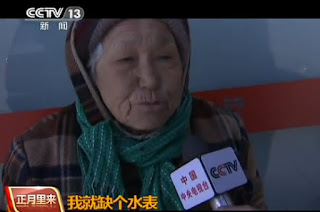 “Lacking sleep” was also a common complaint among the interviewees. Taxi driver Zhang Wei said that he works 12 hours a day and that lack of sleep is a big concern. Chongqing news media reporter Shan Shibing who often pulls all-nighters said in his microblog that he’s a person who lives in the dark but lacks sleep, that hearing his mobile phone ring right after falling asleep is a frequent nightmare. 37-year-old Huang Guohui often relies on doing push-ups to keep himself awake on night shifts, looking forward to his rest day to get some more sweet sweet sleep.
“Lack energy/spirit” was another frequent reply. One retired old lady said she felt her current life was boring/tedious, lacking spiritual and cultural content. Chongqing writer Mo Huaiqi said he lacked youthfulness. Administrative staff Wang Li felt a shortage of happiness and emotion. Securities company employee Sun Hongtai said with a serious face that he currently lacks opportunity and platform [for success] the most. 21-year-old, 1.4-meter-tall “Dwarf Kindergarten Teacher” Yan Feng said what he lacks most is experience, because experience is his invisible wealth.
Likewise there were people “who are content with what they have”, who no matter how the reporters asked the question insisted they do not lack anything. Yuan Zhengwan, a retired worker currently opening land to grow produce, said he has a place to live and a pension to collect, so he doesn’t lack for anything. Street cleaner Chen Daofen also said with satisfaction that her danwei [workplace, employer] was not behind on paying their wages this year and will even be increasing their wages this year, so she has been very content.
One of the organizers of this “godly question” and Chongqing media worker Fu Liao told this reporter that there is no right answer to the question of whether one lacks or doesn’t lack anything. In this day and age where material abundance increases daily, perhaps perhaps only when we don’t lack anything in our hearts are we truly no longer lacking. He hoped that this “down-to-earth” series of interviews can reflect the real living conditions and psychological hopes of grassroots society.
Posted by Claude Arpi