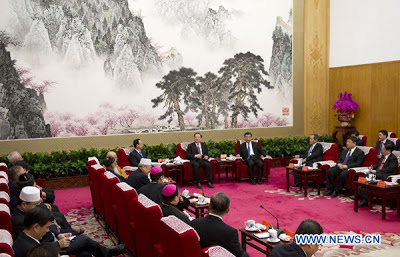 Officially, Beijing's policy regarding religions remains the same. But...

“Esteemed monks: Tibetan religious policy better than ever” recently titled China Tibet Online, an official website of the Chinese Communist Party (CCP).
It quotes the 16-year-old Reting Rinpoche who said that “the religious policies in Tibet are very good”, adding that he would “devote himself to the religious cultivation and improving Buddhist attainments to contribute to the social stability”. ‘Social stability’ is a euphemism for the continuance of the rule of the Party.
Dechen Wangmo, chief of the religious affairs of Tibet's CPP Consultative Conference (CCPCC) explained that age is not a problem to become a ‘political advisor’: “Living Buddhas [the term used by the Communists for the reincarnated lamas] like Reting Rinpoche enjoy a very high prestige among Tibetan people and they have always been role models for patriotism.”
These new ‘advisors’ are Party lovers, wearing the burgundy monk’s garb. Sonam Puntshok, the China-selected 7th Reting Rinpoche is one of them. Xinhua has to remind the faithfuls that the Reting Rinpoches played an important place in Tibetan history.
Without going into the devious personality of the 5th Reting, who occupied the regency in Tibet from 193 to 1941, it is enough to say that he was closely linked to the Kuomintang and was at the center of a quasi-civil war in Tibet in 1947; the present seventh ‘incarnation’ is a pure production of the Chinese Propaganda Department, without any formal recognition from the Dalai Lama or any other serious spiritual leader.
In recent weeks, religion seems to have become essential for a Party which once thought it was poison.
For example, Khenpo Karchen Lobsang Phuntsok, the oldest religious deputy at Tibet’s CCPCP invited his countrymen “to practice Buddhist cultivation with the love for the State and the religion.”
Beijing’s regime has recently started appointing pliable ‘political advisors’ in Tibet.
Other shadowy characters such as Dinga Rinpoche Pasang Namgyal from Tohlung Dechen County have been elevated to the same rank; Dinga quotes the Buddha as saying “do all that is good”; he probably means “good for the Party”.
One Gyatso Ling Rinpoche Thubten Drapa, also a ‘political advisor’ announced that “all lives are equal; the Buddha is also asking people to respect their own lives.”  It is clearly propaganda to control the desperate local population, most of the time not fooled by these gimmicks.
Ironically, the Panchen Lama, the second highest Lama in Tibet whose reincarnation was recognised by the Dalai Lama, is under house arrest for the past 18 years.
But the local population is not fooled by the Beijing propaganda and the resentment against the Chinese is increasing by the day.
Yu Zhengsheng, a newly-elected member of the Standing Committee of the Politburo (and number 4 in the Party), who will soon take over the chairmanship of Central Working Coordination Small Group on Tibet, has already started overlooking the activities of the Roof of the World. His recent visit to Tibetan areas of Sichuan (where he had several photo-opportunities with local Tibetans) seems to confirm the transfer of power. But if the face is new, his first words are not.
During his inspection tour, Yu declared: “The fight against the Dalai Lama clique should continue in order to create a favorable social and political environment for economic development and the improvement of people’s well-being”.
However, more recently during a meeting with major religious groups in Beijing, Yu spoke of religion as a ‘positive force’.
He particularly mentioned the usefulness of religion in promoting economic and social development. He said that "efforts are needed to make religion conducive to national development and the improvement of religious adherents' material and spiritual lives".
Are Yu’s latest utterances heralding a change in Beijing’s policy vis-à-vis the Buddhist region? It is doubtful as discrimination against the Tibetans still remains strong, forcing young Tibetans to self-immolate.
But it appears that the Party has decided to play the ‘religion’ card to solve the Tibet issue. Beijing has appointed the largest ever number of clerics in the CCPCC, the region's political advisory body. This year, some 115 seats have been reserved for monks, 18.7 percent of the total 615 seats, a raise of 121% from the previous Conference.
Ironically, two years ago, the Dalai Lama announced that he wanted to delink his political and spiritual duties. He handed over his responsibilities to an elected leader.
The Chinese Communists are going in the opposite direction, they now believe in religion, they love religion… but for their own purpose.
The Dalai Lama is right, in a modern State, it is not good to mix religion and politics… and democracy is still the best system.

CPC's religious policy to remain unchanged: official
Xinhua
February 2, 2013
BEIJING, Feb. 4 (Xinhua) -- A senior official of the Communist Party of China (CPC) said on Monday that the CPC will adhere to its basic policy of respecting religious freedom.
When meeting with leaders of major national religious groups in Beijing, Yu Zhengsheng, a Standing Committee member of the Political Bureau of the CPC Central Committee, said the Party's policy on religious affairs will remain unchanged.
The CPC's fundamental religious policy includes respecting religious freedom, administering religious affairs according to law, the principle of independence and self-governance as well as guiding religion to make it adapt to a socialist country.
Only by implementing the policy can both religious followers and non-religious people be mobilized in the joint endeavor to build China into a moderately prosperous society in all respects, Yu said.
"Only by implementing the policy can China withstand the infiltration of overseas-based hostile forces that make use of religion," according to the official.
Hailing the achievements of religious groups in organization building, Yu stressed the importance of religious personnel training and called on CPC committees and local governments to give more support to religious adherents.
The official also extended Spring Festival greetings to religious followers.
Yu Zhengsheng, a member of the Standing Committee of the Political Bureau of the Communist Party of China (CPC) Central Committee, meets with leaders of major national religious groups in Beijing, capital of China, Feb. 4, 2013. (Xinhua/Huang Jingwen)
Posted by Claude Arpi